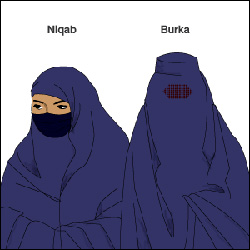 A BBC graphic shows the difference between the niqab and burqa

Other measures include a clampdown on distributing extremist material, and immigrants being obliged to sign an “integration contract”.

A 12-month “integration program” will include courses in “values” and the German language. Failure to attend can result in cuts to social security payments.

The legislation was hammered out by the centrist government amid strong support for the far-right and the arrival of 90,000 asylum-seekers since 2015.

The legislation was first announced by Austrian Chancellor Christian Kern in February, as part of a package of policies aimed at countering the rise of the far-right Freedom Party.

Austria, which is mainly Catholic, is home to around 600,000 Muslims in a total population of about 8.7 million.

The outlawing of the burqa or other clothing concealing the face follows similar moves in other countries in Europe.

France was the first country to do so, having introduced a ban on women wearing the burqa in 2010.

A parliamentary committee in Belgium later voted to ban the burqa as well. Italy has drafted a similar law.

Last November, the lower house of the Dutch Parliament voted to enforce a ban on burqas and niqabs.

Most recently, German lawmakers approved a partial ban on the burqa in late April.

Romanian President: We’re Increasing Our NATO Contribution Because of Trump

(CNSNews.com) - Romanian President Klaus Iohannis said Friday that his country is increasing its contribution to NATO after hearing President...