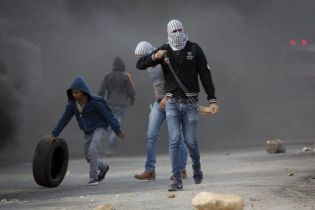 Germany is now joining France in the enormous build up to civil War as conservatives takes hold as a result of the migrant crisis and the recent Islamic Terrorist attacks. Street fighting has now erupted in Germany with citizens clashing with police across several German cities.

Speisa.com reports: In a build-up to what might end in a regular civil war, Germany now warns of a massive so called “right-wing radicalization” due to the migrant crisis – as street fighting and clashes erupt between left-wing and right-wing demonstrators in several German cities.

The left calls them racist, the leaders control any legitimate criticism of their disastrous migration policy.

Are conservatives soulless for wanting a better life for their family and children?

Are conservatives soulless for wanting “Europe” to remain “Europe” (both genetically, culturally and linguistically)?

How are conservatives soulless or racist for not wanting “Europe” to make the same mistakes it did in the past 150 years, which resulted in the deaths of some 250 million people?

It seems if conservatives put others’ quality of life above that of my family then conservatives could understand the liberal opinion, at least logically.

The question is, how can liberals accept an ideology to be true if it means sacrificing your own family’s well-being for the *THEORETICAL* betterment of others, foreigners??

Every year the past few years approx. 3k economic migrants drown in the Mediterranean. If the Italian Navy were to sink a few of these boats and machine-gun everyone in the water, you’d kill a few hundred people … but its also highly like the boats-in-the-med would stop.

Which is more “ethical”:

– Inaction that kills 3k per annum

When taking into account the number of people from the different nationalities in Sweden, Afghans are 79 times more likely to commit a sexual crime than people born from Swedish citizens.

According to an Ipsos survey, commissioned and published by Le Monde, 65 percent of French people believe that there are “too many foreigners” in France, while 60 percent say that they “don’t feel at home as they did before.”

Also, over 60 percent said that migrants “in France do not make the effort to integrate,” and 46 percent believe that integration isn’t a complicated process.

An overwhelming 78 percent of the French regard Islam as a religion “seeking to impose its way of life on others.”

Even the most left leaning Hollywood lunatics are starting to get a clue the the disadvantages of massive Muslim migration. Open Borders Advocate George Clooney Moving Family Back to Trump’s America for ‘Security Reasons’ after numerous terrorist attacks in the UK.

New York Times editorial* published on Thursday that lays out the case for how the Hillary Clinton campaign was colluding...