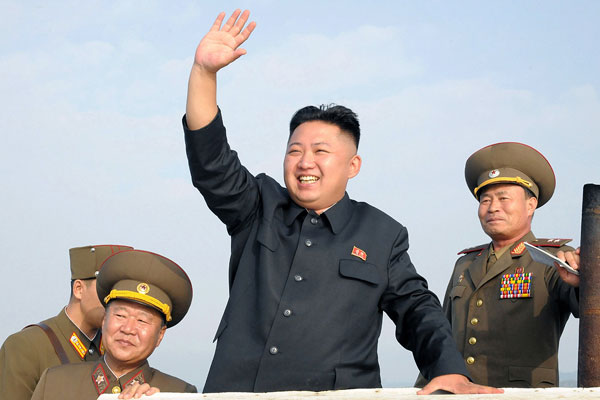 Here I thought (not really) we were on the brink of global nuclear devastation. The talking heads at CNN, MSNBC, ABC, CBS, and NBC were hyperventilating. At any second atomic fire would rain down upon the sweet, innocent, heartland of America. Why? Because Trump had “dangerously mishandled” the situation with North Korea.

We could have simply caved to Kim Jong Un’s threats and launched an exhaustive review our oh-so-draconian policies but, no, Trump was calling the Norks’ bluff.  Soon, we’d all be bolting weapons to our cars and scavenging the radioactive deserts for water. Our doom was assured:

It was the end of the world as we know it, and Fareed Zakaria was not feeling fine

It was the end of the world as we know it, and Fareed Zakaria was not feeling fine. His sentiments were echoed on almost every news channel. A madman had seized control of the White House and Guam, a U.S. territory that had almost tipped over from military overuse, would soon be no more.

General Mattis wasn’t helping.  He’s a warmongering loose cannon, you see.  Every time he opens his mouth, he utters something unconscionable and high-minded scientists are forced -forced I tell you – to move the idiotic Doomsday Clock a notch closer to midnight.

…And then all the posturing worked.

Kim Jong Un has blinked, and he’s backing away from his ridiculous threats.

North Korea leader Kim Jong Un appears to have backed away from a threat to fire missiles towards the US Pacific territory of Guam, opting instead to wait and see what the “foolish Yankees” do next.

State media KCNA said Kim had reviewed a previously announced plan to fire four missiles on a trajectory over western Japan, but had decided not to go ahead with the proposal for now.

The comments came after US Secretary of Defense James Mattis warned that if North Korea fired on US territory it would be “game on.”

Speaking at the Pentagon Monday, Mattis told reporters: “You don’t shoot at people in this world unless you want to bear the consequences.”

On-air, CNN is doing its damndest not to give Trump any credit for this

On-air, CNN is doing its damndest not to give Trump any credit for this, but it all rings insanely hollow. They were, without question, silently hoping Trump would fail – even if it meant war.  It hasn’t happened. Instead, the Trump administration is enjoying a big win.

There’s a lesson here, should the left ever want to learn it. The military might of the United States is such that we can stare down the dictators and thugs that run most rogue nations.  You don’t have to ship pallets of unmarked bills to rogue nations in the dead of night …if you don’t want to.

In an interview with the Associated Press (AP), University of California, San Francisco Director of Mental Health Diane Ehrensaft, claimed...