THE centre of a Finnish city is on lockdown after six people, including a woman pushing a baby in a baby stroller, were stabbed with a large knife by Muslim attackers. Police in Finland have shot and arrested a Muslim suspect after several people were stabbed in the city of Turku. 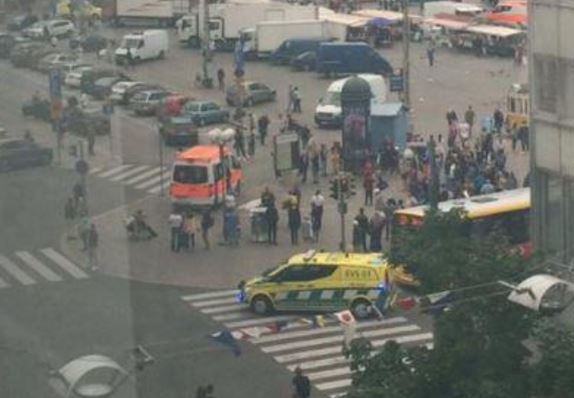 Armed police scrambled to the Eastern Uusimaa region  as reports of a knife-wielding group rampaged through the city.

The chaotic scene in Turku where a number of people armed with knives are said to have attacked others.

It is currently unclear if it was just one person with a knife or multiple attackers as there are mixed reports.

Bystanders said a number of people were stabbed in Market Square before one person was arrested by Finnish police.

It is not clear if this is the same person who is said to have been shot in the leg by police as bystanders say they heard gunshots.

One man and five women – one pushing a baby in a stroller – were injured in the attack.

One person tweeted: “At least 5 victims, most likely some fatalities one was a woman with a baby.”

Others said a young man and woman were stabbed in the back during the rampage.

According to local reports at least one person was lying on the ground as multiple people also appeared to be injured.

A body was reportedly seen covered up and witnesses said they saw a pool of blood following the attack.

A few minutes later cops tweeted a suspect had been shot in the leg and taken into custody.

A number of people were reportedly seen running with knives in the city centre of Turku, on the southwest coast of Finland.

This comes after two Islamic terror attacks in Spain yesterday. Turku lies around 140 kilometers (around 85 miles) west of the capital, Helsinki.