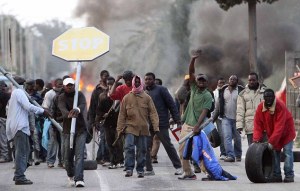 WASHINGTON – There is no doubt that the United States is a country divided, especially along racial lines.

But while the white population of America is continuously derided as “racist,” things are not as simple as they appear.

Colin Flaherty, author of “White Girl Bleed a Lot: The Return of Racial Violence in America and How the Media Ignore It,” was a recent guest on “The Hagmann Report” to discuss what he believes is a dramatically under-reported factor of racial division in the United States: violence from the black community.

According to Flaherty, race relations reached their lowest point under the Obama administration, and a lack of media discourse on the issue exacerbated the problem.

He noted that two weekends ago there were four large examples of black mob violence on the streets of America.

Violence of this kind, he said, is often swept under the rug.

“This is happening over and over and over. And if there is anything underneath of it, it’s easy to see what it is,” he continued. “Just turn on any cable news network, and you’ll see a talking head expressing this really direct black-on-white racial hostility. And so you have a lot of hostility that is now mainstream, so you have a lot of violence.”

The root of the violence, often against police, is years of programming from the media, he said.

Flaherty noted the establishment media justify black violence in three ways: “Either a) it’s not happening, b) white people do it, too, or c) white people deserve it.”

The justification began during the Obama administration, as many government agencies pushed the concept of “white privilege” into the mainstream, Flaherty believes.

He said “everyone” in the Obama administration was behind the race-baiting, claiming the Obama DOJ even sent employees to Ferguson, Missouri, to agitate for violence.

“It’s just hard to believe how much black-on-white hostility was incorporated into the federal government for eight years,” Flaherty added.

“Reporters and public officials are in denial, deceit, and delusion” when they refuse to cover this hostility, he said.

Instead of covering the incidents as an outpouring of black-on-white hostility, reporters push what Flaherty calls “the big lie,” the idea that blacks in America are victimized.

Flaherty said the establishment media’s myth of black victimization has led to unrest.

The myth, he said, is based on the notion that black people turn to crime as a result of “institutional racism” from whites and not due to any other factors. It leads many Americans to excuse crimes and instead blame the police.

“The reporters and public officials are so eager to convince black people that they are not responsible for their own actions,” Flaherty said.

Flaherty noted that black violence is often directed against Asians, Hispanics and other blacks, especially in more multicultural urban areas.

People who try to speak up about these issues are often silenced or forced to apologize, he said, even just for stating facts.

“White people and other people have lost the ability to talk about this in a plain fashion.”

Those who condemn black violence are often called to recant, a demand Flaherty finds ridiculous.

“Why should we be the ones to apologize? We’re just the ones noticing,” he said.

Trump Lays Out a Winning Strategy for Afghanistan

After months of speculation and delay, President Donald Trump has sided with the expert advice of his military and national...