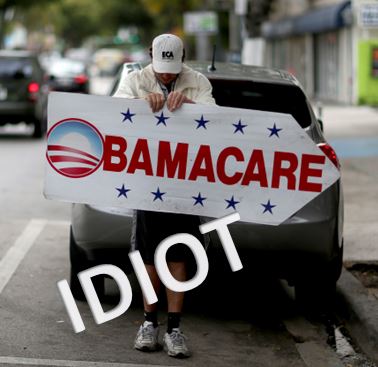 Idiot Obamacare supporter holds his head down in Shame.

WASHINGTON — Millions of people who buy individual health insurance policies and get no financial help from the “Affordable” Care Act (AKA: Obamacare) are bracing for another year of double-digit premium increases, and their frustration is boiling over.

Some are expecting premiums for 2018 to rival a mortgage payment.

What they pay is tied to the price of coverage on the health insurance markets created by the Obama,  these consumers get no protection from the law’s tax credits, which cushion against rising premiums. Instead they pay full freight and bear the brunt of market problems such as high costs and diminished competition.

On Capitol Hill, there’s a chance that upcoming bipartisan hearings by Sens. Lamar Alexander, R-Tenn., and Patty Murray, D-Wash., can produce legislation offering some relief. But it depends on Republicans and Democrats working together despite a seven-year health care battle that has left raw feelings on both sides.

The most exposed consumers tend to be middle-class people who don’t qualify for the law’s income-based subsidies. They include early retirees, skilled tradespeople, musicians, self-employed professionals, business owners, and people such as Sharon Thornton, whose small employer doesn’t provide health insurance.

“We’re caught in the middle-class loophole of no help,” said Thornton, a hairdresser from Newark, Delaware. She said she’s currently paying about $740 a month in premiums, and expects her monthly bill next year to be around $1,000, a 35 percent increase.

“It’s like buying two new iPads a month and throwing them in the trash,” said Thornton, whose policy carries a deductible of $6,000. “To me, $1,000 a month is my beach house that I wanted to have.”

A suggestion that she could qualify for financial assistance by earning less only irritates her more. “My whole beef is that the government is telling me: ‘If you work less, we’ll give you more,'” said Thornton, who’s in her 50s.

If people such as Thornton drop out, they not only gamble with their own health. Their departure also means the group left behind gets costlier to cover as healthier customers bail out. That’s counter to the whole idea of insurance, which involves pooling risk.

It wasn’t supposed to be this way.

Buying health insurance has always been a challenge for people getting their own policies outside the workplace. Before “Obamacare,” insurers could turn away those with health problems or charge them more. Former President Barack Obama sold his plan as the long-awaited fix.

It would guarantee coverage regardless of health problems, provide tax credits and other subsidies for people of modest means, and generate competition among insurers to keep premiums in check for all. The overhaul sought to create one big insurance pool for individual coverage in each state, no matter whether consumers bought plans through HealthCare.gov or traditional middlemen such as insurance brokers.

But an influx of sicker-than-expected customers drove up costs for insurers, while many younger, healthier people stayed on the sidelines. Political opposition from Republicans complicated matters by gumming up the law’s internal financial stabilizers for insurers.

The result was a 25 percent average increase in the price of a midlevel plan on HealthCare.gov heading into this year. Many states expect a similar scenario for 2018, but this time insurers say uncertainty about the Trump administration’s intentions is driving up their bids ahead of the Nov. 1 start of open enrollment.

About 17.6 million people buy individual health insurance policies, and half of them get no subsidies under the law, according to estimates by the nonpartisan Kaiser Family Foundation. The number of unsubsidized customers with ACA plans outside the health insurance marketplaces dropped by 20 percent this year, after the big premium increases.

“The unsubsidized part of the market outside the exchanges has shrunk noticeably as premiums have increased,” said Kaiser’s Larry Levitt. “It’s likely that the people dropping out of the market are healthier overall. So the pool has potentially deteriorated.”

“The people who are really getting hammered – they are the ones we need to help,” said Alexander, R-Tenn. “We’ve got a few weeks to come to consensus in this seven-year-old partisan stalemate and if we don’t break it, some people will be priced out and badly hurt.”

Alexander envisions limited legislation that guarantees disputed subsidies for copayments and deductibles another year, while giving states more leeway to design less-costly plans. Democrats are looking for financing to help insurers with high-cost cases. Experts say that guaranteeing the subsidies should lead to an immediate cut in premiums in many states.

Thornton, the Delaware hairdresser and longtime Democrat, said she she voted for Donald Trump – her first time for a Republican partly out of frustration with her health care costs.

In Case You Missed It:  Our Growing China Problem
Posted in Financial and tagged Financial, Obama, Obamacare, US Citizen.

Google isn’t merely EVIL; it has become a DANGER to freedom, liberty and democracy

(Natural News) In case you haven’t noticed all the censorship recently, Google has become a rampaging monster of Orwellian oppression,...