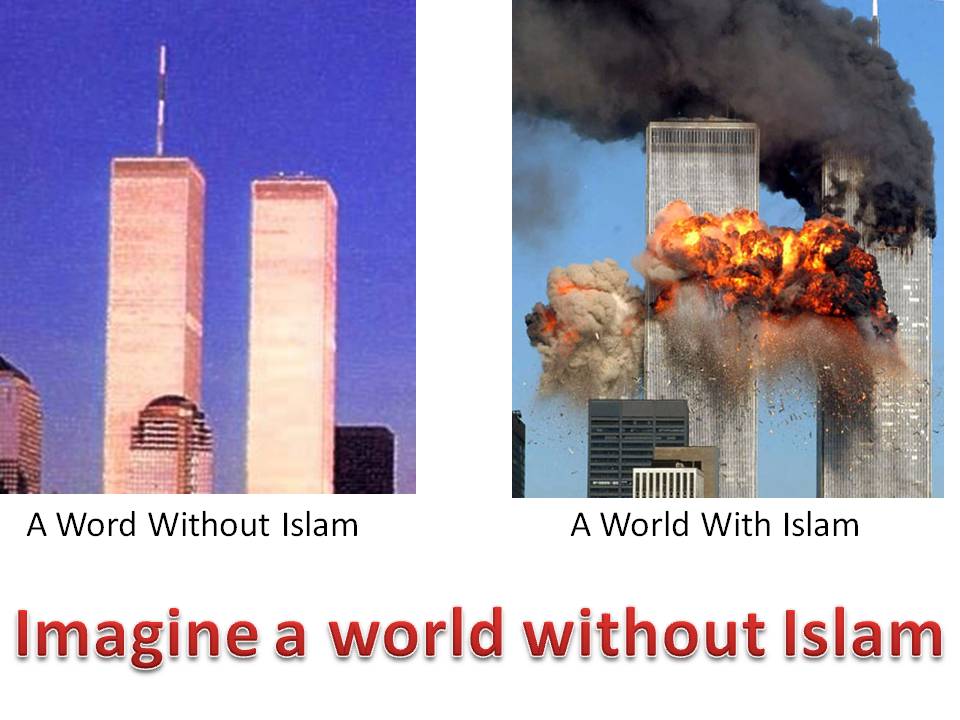 “In the name of Allah, the Most Merciful, the Most Compassionate,” a terrorist declares on the Flight 93 cockpit recording. That’s followed by the sounds of the terrorists assaulting a passenger.

As the passengers rush the cabin, a Muslim terrorist proclaims, “In the name of Allah.”

As New York firefighters struggle up the South Tower with 100 pounds of equipment on their backs trying to save lives until the very last moment, the Flight 93 passengers push toward the cockpit. The Islamic hijackers call out, “Allahu Akbar.” The Islamic supremacist term originated with Mohammed’s massacre of the Jews of Khaybar and means that Allah is greater than the gods of non-Muslims.

Mohammed Atta had advised his fellow terrorists that when the fighting begins, “Shout, ‘Allahu Akbar,’ because this strikes fear in the hearts of the non-believers.” He quoted the Koran’s command that Muslim holy warriors terrorize non-believers by beheading them and urged them to follow Mohammed’s approach, “Take prisoners and kill them.”

The 9/11 ringleader quoted the Koran again. “No prophet should have prisoners until he has soaked the land with blood.”

On Flight 93, the fighting goes on. “Oh Allah. Oh the most Gracious,” the Islamic terrorists cry out. “Trust in Allah,” they reassure. And then there are only the chants of, “Allahu Akbar” as the plane goes down in a Pennsylvania field leaving behind another blood-soaked territory in the Islamic invasion of America.

Today that field is marked by the “Crescent of Embrace” memorial.

Thousands of Muslims cheered the attack in those parts of Israel under the control of the Islamic terrorists of the Palestinian Authority. They shouted, “Allahu Akbar” and handed out candy.

But similar ugly outbreaks of Islamic Supremacism were also taking place much closer to home.

On John F. Kennedy Boulevard, in Jersey City, across the river from Manhattan, crowds of Muslim settlerscelebrated the slaughter of Americans. “Some men were dancing, some held kids on their shoulders,” a retired Jersey City cop described the scene. “The women were shouting in Arabic.”

Similar Islamic festivities broke out on Atlantic Avenue in Brooklyn, a major Islamic settlement area, even as in downtown Manhattan, ash had turned nearby streets into the semblance of a nuclear war. Men and women trudged over Brooklyn Bridge or uptown to get away from this strange new world.

Many just walked. They didn’t know where they were going. I was one of them.

That Tuesday was a long and terrible education. In those hours, millions of Americans were being educated about many things: what happens when jet planes collide with skyscrapers, how brave men can reach the 78thfloor with 100 pounds of equipment strapped to their backs and what are the odds are of finding anyone alive underneath the rubble of a falling tower. They were learning about a formerly obscure group named Al Qaeda and its boss. But they were also being educated about Islam.

Islamic terrorism was once something that happened “over there.” You saw it on the covers of Time or Newsweekback when those were staples of checkout counters and medical offices. But even after the World Trade Center bombing, it wasn’t truly “over here.” But now it was. The war was here.

Some of us were born into it better than others.

At Union Square, I passed NYU students painting anti-war placards even as the downtown sky behind them was painted the color of bone. They ignored the crowd streaming up past them and focused intently on making all the red letters in NO WAR line up neatly on the white cardboard.

In the years since, I have seen that look on the faces of countless leftists who ignore the stabbers shouting, “Allahu Akbar” in London or the terrorist declaring, “In the name of Allah, the merciful,” among the bloody ruin of a gay nightclub in Orlando. Instead they focus on their mindless slogans.

“NO WAR,” “Stop Islamophobia” and “Refugees Welcome.” The world of the cardboard sign and the simple slogan is an easier and neater one than a sky filled with the ashes of the dead.

On September 11, some of us opened our eyes. Others closed them as hard as they could.

That Tuesday irrevocably divided my generation. Some joined the military, the police or became analysts. Others turned left-wing activists, volunteered as lawyers for terrorists or converted to Islam.

The passengers on Flight 93 who took the lead were in their thirties. But the two firefighters who made it to the 78th floor of the South Tower, Ronald Bucca, who did duty in Vietnam as a Green Beret, and Orio Palmer, a marathon runner, were in their forties. Those men and women had the most meaningful answers to the old question, “Where were you when it happened?”

I was just one of countless people moving upstream away from Ground Zero.

It still isn’t over.

After every attack, Boston, Orlando, San Bernardino, New York, Paris, Manchester, London, Barcelona, we are encouraged to mourn and move on. Bury the bodies, shed a tear and forget about it.

Terrible things happen. And we have to learn to accept them.

Everything I needed to know about Islam, I learned on September 11. The details of the theology came later. I couldn’t quote the Koran while the sirens were wailing. But I learned the essential truth.

And so did you.

“Where were you?” is not just a question to be asked about September 11, 2001. It is an everyday question. What are you doing today to fight the Islamic terrorists who did this? And tomorrow?

I found my answer through my writing. Others have made a more direct contribution.

But it’s important that we keep asking ourselves that question.

The 9/11 hijackers, the members of Al Qaeda, of ISIS, of the Muslim Brotherhood and the entire vast global terror network, its supporters and fellow travelers asked themselves that question every day.

They are still asking it.

From the Iranian nuclear program to the swarm of Muslim Brotherhood organizations in America, from the Muslim migrant surge into Germany to the sex grooming gangs of the UK, they have their answers.

Our enemies wake up every day wondering how to destroy us. Their methods, from demographic invasion to WMDs, from political subversion to random stabbings, are many.

A new and terrible era in history began on 9/11. We are no more past it than we were past Pearl Harbor at the Battle of Midway. Its origins are no mystery. They lie in the last sound that came from Flight 93.

We are in the middle of the longest war in American history. And we still haven’t learned how to fight it.

September 11 has come around again. You don’t have to run into a burning building or wrestle terrorists with your bare hands. But use the day to warn others, so you can answer, “Where were you?”

I Went to a ‘Remembering Our Fallen’ Memorial in DC. Here’s What I Saw.

In the 16 years that have passed since Islamist terrorists attacked this country on 9/11, thousands of Americans have given...