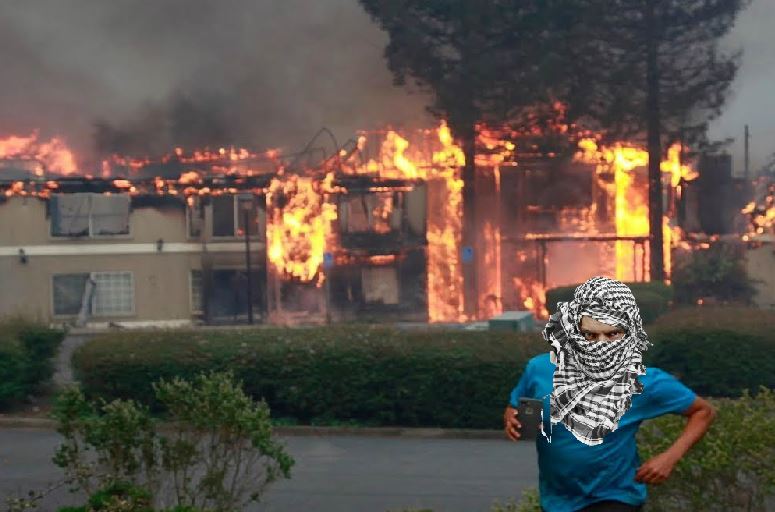 Wine Country On Fire – Is It Terrorism? In Viktor Suverov’s Book, ‘Spetsnaz First World War’, The Intentional Setting Of Forest Fires Is One Tactic Of ‘Grey Terror’, Fires Deliberately by Muslims.

Back in 2012, Al Qaeda magazine ‘Inspire’ published a story instructing their legion of followers how to ‘unleash hell’ upon America, describing in detail how to make ’ember bombs’. ‘It is of your Freedom to Ignite a Firebomb’ they titled their story while encouraging terrorist-wannabe’s to target Montana because of the rapid population growth in its wooded areas.

With screams of terror now raining down on ‘wine country’ in California as a huge cluster of devastating wildfires have killed at least 15 people and destroyed more than 2,000 homes, businesses and other buildings as the fires rage totally out of control as we see in several videos below, the first video is a must-listen as radio talk show host Michael Savage takes calls directly from people living in California and suffering through the smoke and flames.

And as we hear, more than one caller suspects terrorism as the root cause for these fires which sprung up so suddenly and violently and in so many different locations seemingly at once, thoughts echoed by several different commenters on several different ANP stories who feel that something very strange is going on with all of these fires.

As this 2012 Daily Mail story on ISIS’s plans to launch fire bombs across America reports, an unsubstantiated claim within the ‘Inspire’ story claimed forest fires in Australia back in December of 2002 allegedly unleashed a heat energy equal to that of 23 nuclear bombsand the terrorist magazine was asking their followers to unleash the same destructive force upon America, calling arson attacks ‘just terror tactics’.

And while we’re unable to prove that ‘foul play’ is the cause of the devastation in California, we remind you that in Viktor Suverov’s book, “Spetsnaz First World War”, the intentional setting of forest fires is one tactic of what is known as ‘grey terror’, fires that are deliberately set to advance a political agenda.

As Wildfire Today reported back in 2012 in a story about ISIS’s threats to use fire as a weapon, the history of fire as a tool of warfare is well-documented: Native Americans used fire against their enemies, both other tribes and the expanding Europeans; the Aboriginal people of Australia used fire to discourage the incursion of the British settlers onto their island. In World War II, the ]apanese launched “fire balloons” against the western United States. While largely unsuccessful, they started a few fires and killed six people in Oregon. The Palestinians in the latter half of the 20th century used fire to try to destroy Israel’s carefully planted pine plantations.

Fire wars are not limited to Europe and the U.S. Palestinan jihadists have been setting fire to Israel’s modest forests for many years. However, political correctness seems to override Israeli and Russian warnings of that jihadist modus operandi. How many Tzarnaevs are hiding in Colorado’s woods?

While many of the fires that have scorched millions of acres and destroyed thousands of homes in Arizona, California, Colorado, New Mexico, Utah and other states have been identified as arson, none have been publicly attributed to criminal or terrorist groups, despite the presence of Mexican gangs and large number of other illegals in our Western states

“Within hours, the small Colorado town burns to the ground and hundreds of trapped people die horrific deaths. After-action reviews conclude that the deadly fire was ignited by an al Qaeda terrorist – who was never caught – and all fatalities were attributable to ‘insufficient firefighting resources.’ If large air tankers had been deployed in a timely manner, a protective corridor through the conflagration could have been created, providing an escape route.

“Some will scoff and dismiss that scenario as mere fiction, noting that Colorado has neversuffered such a disastrous fire. True, but we’re in a new era, facing a perfect storm of unprecedented elements: Drought; tinder-dry beetle-kill trees blanketing millions of acres; a real-and-present terrorist threat; and a cash-strapped, dysfunctional federal land-management agency that has less than a dozen large air tankers to serve the entire nation.”

Indeed, a state firefighting airforce would make Colorado independent of the cash-strapped, dysfunctional federal land-management agency, reducing the response time from six hours to 20 minutes. Colorado’s Senate Bill 245 was reluctantly approved last April by the Democratic majority; however, it refused to allocate the funds necessary to buy the air tankers. It was signed into law last week by Colorado’s Governor John Hickenlooper.

In Case You Missed It:  9-11-2001 NEVER FORGET
Posted in Terrorism and tagged Islam, terror.

President Donald Trump will speak Tuesday at an annual meeting of Heritage Foundation members in Washington. Trump is expected to...