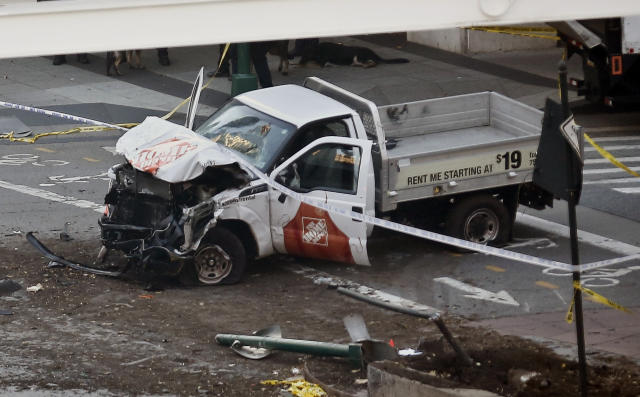 Multiculturalism in New York on Halloween.

Just a few blocks away from One World Trade Center Islam hit again, this time it was not airplanes and large building, but a special needs bus and people walking on the streets while Muslim driver/terrorist was screaming Allahu Akbar..

The Islamic terrorist was apprehended at the scene. Multiple law enforcement officials told ABC News that the Muslim terrorist is in custody and was identified as 29-year-old Muslim male names Sayfullo Saipov originally from Uzbekistan, and more recently resided in Tampa, Florida.

The incident began at about 3:05 p.m., when the vehicle  a Home Depot rental truck drive by a Muslim terrorist entered the West Street pedestrian and bike path north of Chambers Street, hitting multiple people on the path, leaving some dead and “numerous people injured,” New York City police said.

After the terrorist act, the Muslim driver of the truck, a 29-year-old man, exited the vehicle brandishing what appeared to be two handguns, police said. A uniformed police officer confronted the suspect and shot him in the abdomen, police said. A paintball gun and a pellet gun were later recovered at the scene, police said.

The Islamic terrorist shouted something at police when officers confronted him, according to multiple sources.

The Islamic terrorist was wounded and transported to a hospital, police said.

A witness described the chaotic scene to ABC’s New York station WABC, saying that after the truck hit multiple people on the bike path, it crashed into a school bus at Chambers and West streets, near Stuyvesant High School.

“Everybody started running,” the witness said. “… Everything was happening so fast.”

The witness added of the driver, “He kept going all the way down full speed.”

“Thank god the trick-or-treaters weren’t out yet,” the witness later said.

Video from the scene showed mangled bicycles strewn across the bike path.

New York and other cities around the globe have been on high alert against attacks by Muslim Terrorist in vehicles. The Islamic State has been exhorting its followers to mow down people, and England, France and Germany have all seen deadly vehicle attacks in recent months and years 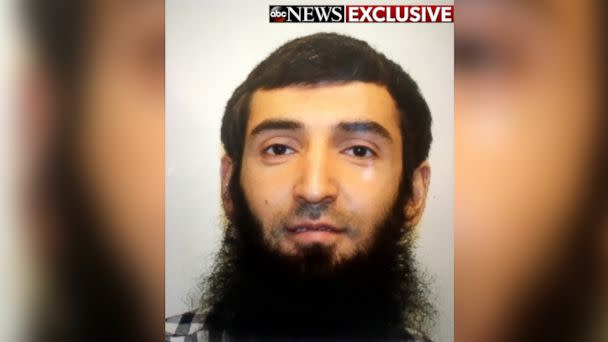 The Plot to Bring Down Trump

By PATRICK J. BUCHANAN  Well over a year after the FBI began investigating “collusion” between the Trump campaign and Vladimir Putin,...