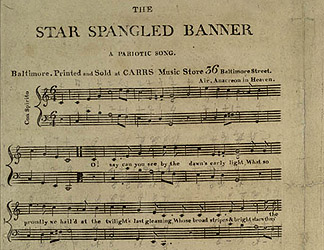 The California chapter of the NAACP passed resolutions at its state conference last month that push for the removal of The Star-Spangled Banner as the national anthem and aim to help former San Francisco 49ers quarterback Colin Kaepernick sign with another NFL team, as first reported by The Sacramento Bee.

NAACP California chapter president Alice Huffman told the newspaper. “I think all this controversy about the knee will go away once the song is removed.”

Huffman, who could not be reached for comment on Thursday, told a local CBS TV station that The Star-Spangled Banner is “racist” and “anti-black.” She referred to an infrequently-sung third stanza that includes the lyrics, “Their blood has wash’d out their foul footstep’s pollution/No refuge could save the hireling and slave/From the terror of flight or the gloom of the grave.”

The claim that America’s national anthem, “The Star-Spangled Banner,” is an expression of racial hostility toward African Americans and should be either retired or at least acknowledged as a subject of national embarrassment.

Claims of this sort have been circulating since at least the 1990s, it would not be fair to say that historians are of one mind on whether Key’s song was understood in its day to be making any reference to race. Exhibit A in critics’ account is the anthem’s seldom-sung third verse, which gloats at the defeat of the “band who so vauntingly swore” America would lose its independence:

No refuge could save the hireling and slave From the terror of flight or the gloom of the grave And the star-spangled banner in triumph doth wave O’er the land of the free and the home of the brave.

There it is: the word “slave.” To an American of 2017, the word is likely to mean one thing only: the system of chattel slavery prevailing in Key’s day in Maryland and throughout the American South.

To some critics who believe the reference to be racial, it’s significant that among the British troops Key fought against in Maryland during the War of 1812 were the Corps of Colonial Marines, free persons of color who had formerly been slaves. But there are other possibilities to consider, too. At the time Key was writing, the word “slave” (we’ll get to “hireling” in a minute) had long functioned in English as a wide-ranging epithet, hurled at persons of any and all colors, nationalities, and conditions of servitude or otherwise.

Shakespeare, who barely mentioned America in his writings, used the word more than 180 times in his works. Fewer than a third of those references are in the plays set in Roman and Greek times, in which characters in the drama might be literal slaves. More often, Shakespeare’s characters — including Macbeth, Lear, and many of the kings in the history plays — use “slave” as an insult. (“O what a rogue and peasant slave am I!” says Hamlet, a prince, as part of a self-lacerating soliloquy.)

Though often signifying low birth, these uses have no connection to color or — aside from the frequent use of the epithet to put down the French — to nationality. Still less do they connect to the institution of chattel slavery as found in the Americas. This usage had not disappeared by Key’s lifetime. In Robert Burns’s battle poem “Scots Wha Hae,” written in 1793 though set more than 400 years earlier, the word “slave” is an insult directed at his fellow Scots who would flee rather than follow their king into the Battle of Bannockburn.

To Americans, while “slave” was both a common descriptive word and an epithet, “hireling” — especially in contexts of poetry and literature — ordinarily carried derogatory connotations. It meant someone such as a soldier, official, or laborer who served for money rather than from some more durable loyalty such as to family or nation. Yet another Robert Burns song, “Parcel of Rogues,” describes Scotland as having been sold out for “hireling traitor’s wages.” “Hireling and slave” is not an accidental pairing; the two words often occurred together as epithets.

The accusation that the poem itself is racist is off the mark and lacks historical context. How is Key’s use of the word, “slaves,” who were part of the enemy force, offensive? How many texts contain the word “slaves”? In such excluding minds, what’s next? The sculpture in Francis Scott Key Park on M Street in Georgetown, next to Key Bridge? What about the equestrian statue of liberator Simón Bolívar, a slave owner, at 18th Street and Virginia Avenue, across from the Organization of American States?

We should not let the historiphobes frame such discussion for their narrow goals. Name one society, culture or civilization, going back to ancient Mesopotamia, which did not have its hands in some form of slavery. All have sinned — even in 2017 there are millions of people enslaved around the world.

by Judith Bergman Although the internet evidently did play a role in the radicalization process, the study showed that face-to-face encounters...