“Look at the two versions of the number “7,” tweeted Wictor.

The inflection of the “Y” is more pronounced in Moore’ signature as Chief Justice. The “R” is noticeably longer in the  signature of Chief Justice, as well.

(39) If you oppose Roy Moore, you make a BETTER ARGUMENT.

You don’t lie about him.

That’s fascism. We need to be better than that…

(40) ADDENDUM: Unless Moore’s handwriting has changed, the yearbook signature is a forgery.

Look at the two versions of the number “7.” pic.twitter.com/dn4z1dMiUe

Here’s another side by side of Moore’s signatures…

The one on the right looks a lot more like his Chief Justice signature.

In addition, Wictor points out the restaurant where Nelson alleges the incident took place was “forged,” incorrectly.

“”Old Hickory House” in Gadsden was never called “Olde Hickory House.” The person who forged the signature got the name wrong,” claims Wictor.

(40) ADDENDUM: Unless Moore’s handwriting has changed, the yearbook signature is a forgery.

Look at the two versions of the number “7.” pic.twitter.com/dn4z1dMiUe

The person who forged the signature got the name wrong. pic.twitter.com/1Op8ZpvWKl

Moore was a Deputy District Attorney (DDA) at this time.

No he wasn’t. Accusers are getting their facts messed up. Hmm…isn’t that interesting that more than one of them made the same error in his work history? It’s almost like they are all corroborating…oh wait! 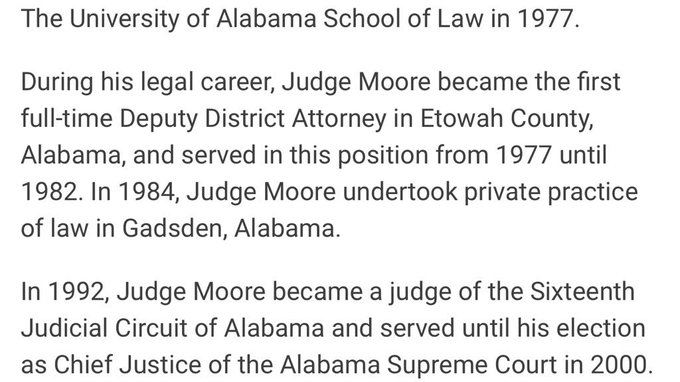 “During his legal career, Judge Moore became the first full-time Deputy District Attorney in Etowah County, Alabama, and served in this position from 1977 until 1982. In 1984, Judge Moore undertook private practice of law in Gadsden, Alabama,” states Moore’s bio on his campaign website.

I SAW THAT TOO.

The accuser to this day calls him the District Attorney.

He was NEVER District attorney. He was DEPUTY DA.

When pressed on whether he truly believes the signature is a forgery, Wictor replied, “In my opinion, the signature is forged. The “Olde Hickory House” and date were DEFINITELY written by someone else. No question whatsoever.”

In my opinion, the signature is forged.

The “Olde Hickory House” and date were DEFINITELY written by someone else.

Then there’s this– Who signs a yearbook in December?

(50) His issue with teenage girls–that “everybody knew about”–never come up ONCE in forty years.

I don’t believe the accusations. Sorry.

Yearbooks are published at the end of the school year: summer.

Christmas is the MIDDLE of the school year. pic.twitter.com/T6sFCA0CjK

Here’s what he told the press:

MOORE: “Thank ya’ll for being here tonight. Thank-you to all the people have came out at this late hour and for being here. I want to address what’s been brought out on television today by Gloria Allred and a client she has about things I allegedly did. I want to make it perfectly clear, the people of Alabama know me, they know my character, they know what I’ve stood for in the political world for over 40-years. I can tell you without hesitation, this is absolutely false. I never did what she said I did. I don’t even know the woman. I don’t know anything about her. I don’t even know where the restaurant is or was. If you look at this situation you’ll see because I’m eleven or ten points or eleven points ahead, this race being just 28 days off, that this is a political maneuver and has nothing to do with reality. It’s all about politics.” 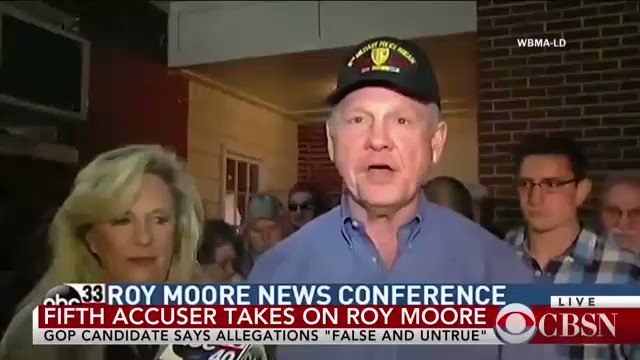 “I can tell you without hesitation, this is absolutely false. I never did what she said I did. I don’t even know the woman,” said Alabama GOP Senate nominee Roy Moore, who was responding to Beverly Young Nelson’s allegations of sexual assault.

Judge Roy Moore is under siege from the mainstream media and political class after the Washington Post published sexual advancement allegations against the Alabama GOP Senate candidate.

On Thursday the far left Washington Post accused Judge Moore of dating a 14 year-old girl in 1979.

Judge Moore has denied the charges and says he’s going to reveal the motivations behind the WaPo hit piece in the next few days.

Senate Majority Leader Mitch McConnell told reporters today that Moore should drop out of the race.

When asked if he believes the allegations, McConnell replied, “I believe the women, yes.”

Moore responded to McConnell on Twitter, saying “The person who should step aside is @SenateMajLdr Mitch McConnell. He has failed conservatives and must be replaced. #DrainTheSwamp”

The person who should step aside is @SenateMajLdr Mitch McConnell. He has failed conservatives and must be replaced. #DrainTheSwamp

In Case You Missed It:  Countdown to ZERO IMMUNITY... vaccine victims are seeing their immune response drop by about 5% each week, with long-term consequences mirroring AIDS
Posted in Freedoms and tagged Election.

How Elite Liberals Have Sold Out the Black Community

When hunting was the major source of food, hunters often used stalking horses as a means of sneaking up on...