The Supreme Court’s final sitting of 2017 begins this week, and the justices will hear oral arguments in a number of high-profile cases involving the Fourth Amendment, free speech and religious liberty, federalism, and property rights. 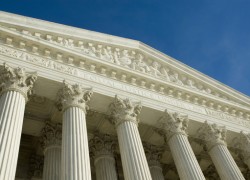 Here’s a look at the cases coming up.

On Nov. 27, the Supreme Court will hear Oil States Energy Services, LLC v. Greene’s Energy Group, LLC, a case involving the federal government’s ability to review the validity of a patent through an administrative proceeding (known as “inter partes” review), rather than in federal court.

While the suit was pending, Greene’s Energy Group asked the federal Patent Trial and Appeal Board for inter partes review of Oil States’ patent. Under this process, the government can decide to invalidate an existing patent—which is precisely what happened to Oil States’ patent.

The company appealed that decision, arguing that inter partes review violates Article III of the Constitution, which vests the “judicial Power of the United States” in the federal courts, and the Seventh Amendment, which guarantees a jury for “Suits at common law.”

Listen to SCOTUS 101: Elizabeth Slattery and Tiffany Bates bring you up to speed on their Supreme Court podcast.

The Court’s decision will have implications for the rights of patent holders nationwide.

On Nov. 29, the court will consider a case involving the Fourth Amendment’s prohibition on unreasonable searches and seizures as they relate to emerging technology.

Carpenter v. United States concerns whether it is constitutional for the government to seize cellphone location records from service providers without a warrant.

The Stored Communications Act allows law enforcement officers to acquire these records directly from service providers, such as Verizon, ATT, and others, after obtaining a warrant or a court order—the latter under a lower standard of proof.

Timothy Carpenter is challenging his conviction for six robberies, which were proved in part by the police seizing his cellphone location records.

The lower court held that information shared with third parties receives no Fourth Amendment protection under the so-called third-party doctrine. But other courts have concluded that this doctrine does not apply, given the sensitivity of these records and the fact that, at least in a meaningful way, people do not give up this information voluntarily.

The outcome of this case could have significant consequences for the law enforcement community—as well as anyone with a cellphone.

On Dec. 4, the court will consider a case involving New Jersey’s attempt to legalize sports betting.

In 2012, New Jersey voters overwhelmingly approved a constitutional amendment legalizing sports betting at casinos and racetracks. But a federal law got in the way: The Professional and Amateur Sports Protection Act bars states from repealing existing prohibitions against sports betting.

In Christie v. NCAA, the Supreme Court will consider whether this law violates the anti-commandeering doctrine as recognized in New York v. United States (1992), which holds that under the 10th Amendment, Congress does not have the authority to commandeer states into the service of the federal government.

New Jersey argues that if this law is permissible, the federal government could interfere with states’ sovereignty to regulate the private conduct of their own citizens—intervening in states’ decisions whether or not to legalize concealed carrying of handguns, working on Sundays, or recreational use of marijuana.

The Right Not to Bake a Cake

On Dec. 5, the court will hear arguments in one of the most anticipated cases of the term, Masterpiece Cakeshop v. Colorado Civil Rights Commission. This case deals with whether Colorado can force a baker to design specialty cakes with messages that violate his religious beliefs.

Jack Phillips, the owner of Masterpiece Cakeshop, declined to design a cake for a gay couple, although he offered to sell them a premade cake. The couple filed a complaint with the state’s Civil Rights Commission, which resulted in a finding that Phillips engaged in sexual orientation discrimination in violation of the state’s public accommodation law.

Phillips argues that forcing him to create these messages violates his free speech and free exercise rights under the First Amendment, and the Colorado Civil Rights Commission says that Phillips may not be exempt from the public accommodation law.

The court’s decision in this case will affect dozens of similar cases pending across the country that involve businesses involved in the wedding industry.

These are only four of the big cases coming up at the Supreme Court, with many more to be argued in late winter and spring. Stay tuned for a series of blockbuster decisions in 2018.

Europeans have been backed into a corner by an Islamic invasion which is being deliberately orchestrated by globalists. Now they...