When they arrested Mannafort, it all came back to the Clinton Uranium One scam. The news headlines today are sooo insanely bass ackwards it’s absurd. A Multiple Felon, 5-time deported Illegal Alien murders a beautiful young American girl and is acquitted, meanwhile a former Military General who served his country with distinction for several decades is dragged through the mud and is going to be jailed for misrepresenting legal and reasonable conversations that were illegally spied on and leaked by the Obama administration and the deep state. Absolutely INSANE!

Obama DID use spy agencies to spy on Trump during the election campaign…an absolute treasonous felony! He wire tapped illegal on behalf of the Democratic Party and Hillary! Total corrupt yet they all continue to walk around arrogantly free as birds. This insanity must end!
No violation of the Logan Act,..unless it was violated by the previous administration.

It was actually the Obama administration that authorized Flynn to speak with Russian diplomats.

I suspect to give the appearance of collusion by Trump transition staff.

Kind of answers a question as to why Obama authorized that, AFTER Obama telling the Trump Transition Team not to hire Flynn because he was “a bad actor.” Obama despised Flynn over his stance against Radical Islamist’s.

The White House said on Friday that it was the Obama administration that authorized former national security adviser Michael Flynn’s contacts with Russian Ambassador Sergey Kislyak during President Trump’s transition, according to CNN. Flynn pleaded guilty on Friday to lying to the FBI about his contacts with Kislyak in the month before Trump took office, the first current or former Trump White House official brought down by special counsel Robert Mueller’s investigation into Russian election meddling. Court records indicate that his communications with Kislyak were directed by a Trump transition official, with multiple news outlets reporting that official was Trump’s son-in-law and senior adviser Jared Kushner. “They are saying here at the White House that Flynn’s conversations with Sergey Kisylak were quote ‘authorized’ by the Obama administration,” CNN correspondent Jim Acosta said.

“We should point out, that is something that we have not heard before in terms of a defense from this White House,” Acosta then bitterly noted.

“After over 33 years of military service to our country, including nearly five years in combat away from my family, and then my decision to continue to serve the United States, it has been extraordinarily painful to endure these many months of false accusations of ‘treason’ and other outrageous acts. Such false accusations are contrary to everything I have ever done and stood for. But I recognize that the actions I acknowledged in court today were wrong, and, through my faith in God, I am working to set things right. My guilty plea and agreement to cooperate with the Special Counsel’s Office reflect a decision I made in the best interests of my family and of our country. I accept full responsibility for my actions.” 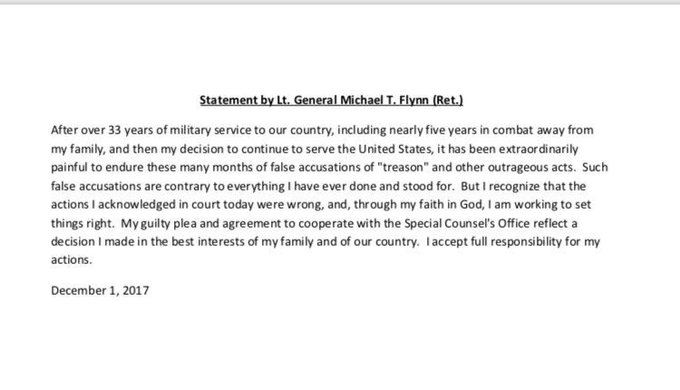 Will this end up biting the Left on the ass?

In Case You Missed It:  American Medical Association releases stunning document teaching doctors to LIE to patients while deliberately exaggerating covid death claims... the AMA admits to its own complicity in crimes against humanity
Posted in Freedoms and tagged Obama, President Donald J Trump.

As reports come out about President Trump’s former national security adviser, Michael T. Flynn, he pleaded guilty on Friday to...