Starbucks has never been known for their appreciation of all their customers despite what political beliefs said customers might hold. Several months ago, Starbucks’ CEO  Howard Schultz announced he would be hiring 10,000 Muslim refugees from the Middle East where ignoring the fact that the pool of Muslim applicants had a high rate of Tuberculosis. Now it appears that some black Starbucks employees are putting a little “something extra” into the drinks of white customers after a disturbing post was made on social media several days ago.

The most recent example is a Facebook post made by a black woman going by the name Shanell Rivers, who claims to work for Starbucks and posted the following to the Facebook group, White People Vs. Black People (The Original) where she went on to brag about the nasty thing she does to drinks, including putting dog feces into the drink of a white 4-year-old’s drink. 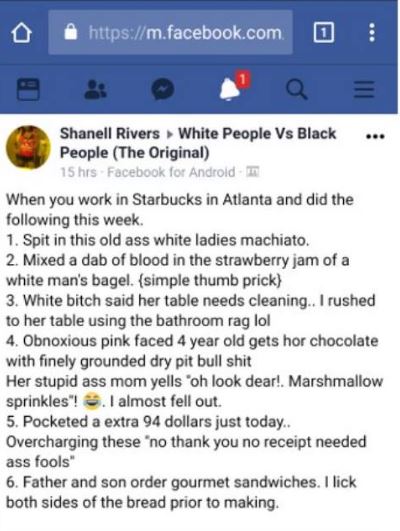 Here’s what she bragged about from the screenshot posted above:

The level of depravity is staggering, but not surprising in a place like Starbucks. The coffee chain giant has continually espoused a liberal mantra, willfully hiring a populace of people, Middle Eastern refugees, who do not espouse to the same hygiene standards as Americans. Additionally, many Middle Eastern refugees are carrying contagious diseases like tuberculosis. Proof of this can be found in the statistic that 21.4% of Muslim refugees in San Diego County carry tuberculosis as of August of this year.

Starbucks, in an effort to meet their 10,000-refugee quota, sought out hiring these refugees despite the potential risk to customers. At the time, Breitbart news contacted Starbucks HQ for a comment asking if Starbucks was going to implement any safety procedures like having refugee applicants tested for contagious diseases.

Starbucks replied by saying, “About 30 Starbucks managers will conduct on-the-spot interviews at the International Rescue Committee’s office located at 131 E. Main Street in El Cajon from 11 a.m. to 1:30 p.m. on Tuesday, Aug. 8. Applicants are encouraged to visit Starbucks online career center prior to the event and bring resumes along with them. The store managers will talk to the refugee applicants about what it’s like to work for Starbucks and review qualifications for the barista position.”

Certainly not every Starbucks employee is a TB carrier, nor is every Starbucks employee willfully putting blood and feces into customer’s drinks. However, the empowerment which Shanell Rivers feels to do this comes from a poor lack of leadership, fostering a belief that conservatives and white people are somehow less human and should be mistreated.

Veteran AF informed the Atlanta Police Department, and they stated they are aware of the contents of the Facebook post and are currently investigating. Lending suspicion behind this disturbing Facebook post, the Facebook profile for Shanell Rivers was active up until just a few hours prior to this article being published, and the story going viral.

In Case You Missed It:  Here It Comes: 'Patriot Act 2.0' Aimed At The UnWoke Enemy Within
Posted in Freedoms and tagged Racism.

Switzerland doesn't mess around and uses sense in immigration hat all countries should follow, including the United States. The idyllic...