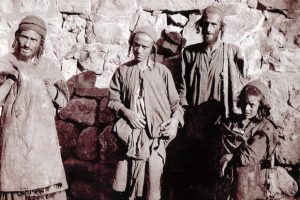 Native American, Yazidi and Tibetan groups stand with Israel
by Ezequiel Doiny
In an interview for the Times of Israel Indigenous activist Ryan Bellerose from Alberta said  “I feel compelled to fight the idea that Israel is a colonialist state, that the Jews are colonizers from Europe and the entire invalid and false Arab narrative that has been spread since the 1960s. This ridiculous inversion of history has been accepted because nobody really stands up and fights it. And I believe coming from an Indian from Canada, who has lived through actual apartheid (two laws, one state for two peoples), I have a unique perspective. I have lived through colonization, and Israel is not even remotely colonialist.
I also do not like people who tell lies to Indians or who use our naivete and ignorance of the world to weaponize us. You are Jews from Judea. Your entire history is in the earth you walk on. Some of you were displaced and you fought for 2,000 years to return to the land of your forefathers. You do not need to be apologetic for doing something that is the goal of every indigenous people. You need to be celebratory. You need to be proud…
Israel needs to be more assertive about its ancestral lands, that it cannot be ambiguous and that the people as well as the government need to understand that it’s not about your “religion or spirituality.” It’s about your very identity. Your connection to your ancestral lands is not only spiritual but physical. Israel itself needs to take a larger role in stopping lies and false assertions because they really do cause issues. I believe that you need to become better at telling your story, which really is an amazing story. I think that once Jewish people start seeing themselves through a Jewish and not European lens, once they understand themselves as indigenous people, they will be stronger in their identity and will become what they are meant to be, which is a light unto the nations.
…You are a great example to my people and to all indigenous people of what indigenous peoples are capable of. You were a damaged fractured people who had the entire world against you, yet you not only regained your ancestral lands, you rebuilt them and you built a thriving powerful nation without losing touch with your ancestral roots. Tell me that’s not a powerful story and example.”
https://www.timesofisrael.com/indigenous-activist-advocates-for-israelis-native-rights/
Not only Native American groups stand with Israel against the false Palestinian narrative, Yazidi and Tibetan groups also stand with Israel.
Ezidi.fr is a website that represents the Yazidi community exiled in France. On December 24, 2017 Mr Pir Melek from Ezidi.fr wrote in an email he sent me:
“…the Jewish people supported us. and we support the Jewish people. Jerusalem is the capital of Israel.”
“…the Sinjar region belongs to the Yezidi people and today we are a minority there. it became a territory of conflict between Kurds and Arab while it was our country yezdikhan (ezdixane).”
Like the Yazidi, the Tibetans also support Israel. On August 31, 2017 Rudranarasimham Rebbapragada wrote “I stand up for Natural Rights of Jews to live in Judea and Samaria; and I stand up for Natural Rights of Tibetans to their ancestral Homeland. I support His Holiness the Dalai Lama’s Five-Point Peace Plan to stop Communist China’s Colonization of Tibet.”
https://wholedude.com/tag/living-rights-of-jews-judea-and-samaria/
“WholeDude.com serves as the official page of Special Frontier Force, a military alliance between the US, India, and Tibet to resist Red China’s Expansionist Policy. Special Frontier Force is funded by United States and it promotes Democracy, Freedom, and Peace in Occupied Tibet…Whole Dude is a phrase that refers to Whole Man in all aspects of one’s being, including physical, mental, social, moral, and spiritual… “
Native American, Yazidi and Tibetan groups stand with Israel: Israel should invite them to build honorary embassies in Jerusalem.
Ezequiel Doiny is author of “Obama’s assault on Jerusalem’s Temple Mount”
In Case You Missed It:  UNANSWERED QUESTIONS: Why has there been ZERO video footage of the raids on the US embassy in Afghanistan or interviews with Americans supposedly rescued by the Biden Regime?
Posted in Freedoms.

Trump should declare that the Palestinians already have a State in Jordan. The India-Pakistan partition did not solve the Muslim-Hindu conflict,it made the conflict more dangerous. The creation of another Arab tyranny in the West Bank will make the conflict worse