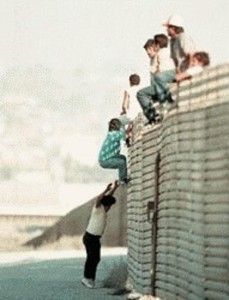 Any trade-off in the looming budget fight over a two-year deal or short-term continuing resolution from the Democrats for a path to citizenship for illegal aliens will be viewed as a complete capitulation to the interests of non-US citizens who already drive much of the annual half trillion dollar budget deficit.

With the continuing emphasis on non-US citizens in 2018 and their right to retain or improve their unconstitutional DACA status, Republicans would politically do well to make a 180 degree turn and start caring about the interests of the millions of actual citizens who are disconnected from everyday political discourse, yet forced to pay for the very politicians and programs that prop up illegal migration.

Trump voters, witnessing first-hand the decimation of their western culture via left-wing propaganda and third world immigration, will not accept the subversion of their dearly won presidential vote to the whims of a recalcitrant congress.

If a clean budget is not passed, the brewing storm of disaffected Republican voters will blow, as early as November 2018, in a lack of voter turnout at the mid-term congressional elections for incumbents.

Networks for Republican voters will pop-up to amplify the growing displeasure over the daily insults endured as a result of a non-responsive government.

The interests and costs associated with massive waves of third world immigration are supplanting the priorities of Americans who have to home-school their children in order to expose them to an advanced curriculum;  must compete with foreigners for coveted slots in state university systems;  suffer the consequences of costing employers more as compared to an immigrant worker for whom ACA and payroll taxes often do not apply;  take a back-seat to “visiting” applicants for government jobs;  and, are frozen out of grant funds that preference non-English speaking populations and international partners.

The dysfunction of a government overwhelmed by immigrants’ reliance on the welfare system is no secret to the voting public who see the vast, diverse non-English speaking populations who show up in hospital emergency rooms, Social Security offices, school orientations, post office lines and traffic courts.

The stability of the United States of America is at risk.

Not only are Democrat Minority Leaders Charles Schumer and Nancy Pelosi holding the budget hostage to immigrant interests, but a solid concentration of power brokers predisposed to government control at the expense of personal freedom is working overtime to thwart real efforts at reform.

The Democrats, time and again, have proven to be an organized, funded and formidable foe, providing ample opportunity for their supporters to resist a duly elected constitutional government, even a year after the close of the election:

In 2017, there was a genuine, historical backlash against President Trump’s leadership and his signature immigration campaign promises: the Wall, deportation, Americans first.

At its core, the US government-media-corporatist complex cannot risk a reversal of the prevailing immigration policy that delivers a steady stream of low-skilled, poorly educated immigrants to fuel a socialist-voting bloc and highly paid jobs with government-funded programs that serve this constituency.  The importation of underserved populations also provides a slick moral justification for their power grab over national resources and produces markets for multi-national companies who trade open borders support for favored industry status with D.C. regulators.

However, this unholy government-media-corporate alliance in defiance of voter interest has a political cost: the legitimacy of the government cannot be sustained if there is not a perceived, much less real, nexus between voting and governance.

For how long does the Republican leadership think they can fail to produce a budget that realigns priorities with those of the Trump voters?  Especially given the fact that they control both houses of Congress and the Executive Branch?

A continuing budget resolution that cobbles together support for a few months of funding while the Lindsey Graham wing of the Senate searches for a successful marketing campaign to provide cover for an impending illegal alien amnesty will not fly for Trump voters who were promised an end to illegal immigration.

Article I, Section 5 of the US Constitution  allows each House of Congress to make the rules for its proceedings.  The lack of ‘60 votes’ excuse will no longer assuage Trump voters into accepting another American citizen amnesty program.

The answer to, “Who is more important: Americans or Non-US Citizens?” is a no-brainer as far as D.C. is concerned.  The only remaining question of consequence on the minds of Trump voters is whether national elections do, in fact, matter.

In Case You Missed It:  15-year-old California boy dies 2 days after second dose of COVID-19 vaccine
Posted in Freedoms and tagged Illegal Immigration.