(lp.org)  It’s a government slowdown , not a shutdown. 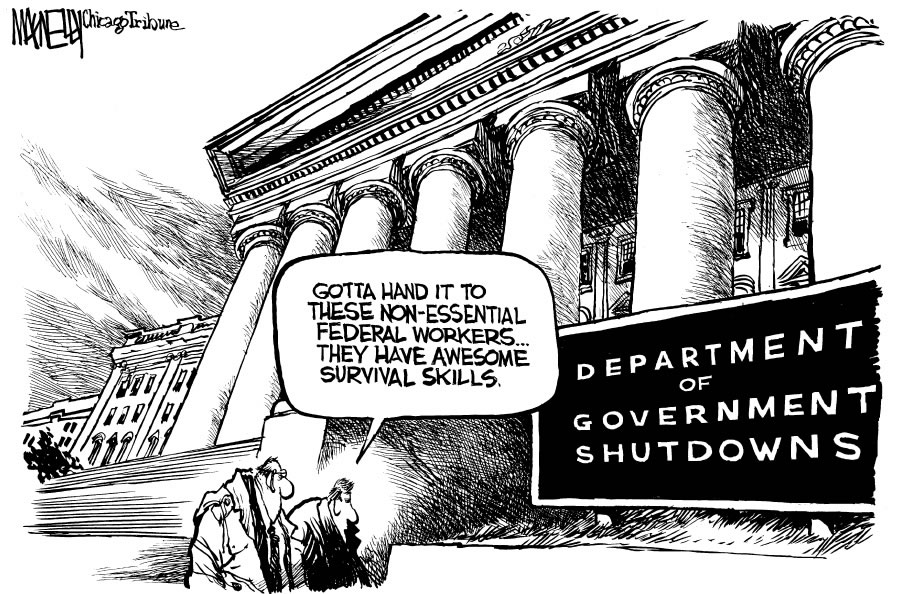 If you read this Libertarian news release, yet continue to use the term ‘government shutdown’ in news reports, then you’re willfully deceiving the American people.

Nor has there ever been anything close to a ‘government shutdown’ in modern American history.

A government slowdown merely reduces spending to the level of taxes collected. In other words, it balances the budget. And that’s bad — why?

The term ‘government shutdown’ is designed to scare people into thinking there can be no police protection, military defense, road repairs, or other essential services unless Americans cough up more money to fund the ludicrously over-funded federal government.

This is a manipulation and a lie.

Let’s review what happened during the 16-day government slowdown of October 2013:

‘Call it what it is: a government slowdown,’ said Nicholas J. Sarwark, Libertarian National Committee chair. ‘And tell Americans the truth: We need much more than a slowdown. We need to dramatically and permanently roll back the federal government to an appropriate size.’

‘The federal government should be limited to protecting American lives, liberty, and property,’ he said. ‘We must start by removing government barriers that prohibit or impair free market alternatives to health care, education, finance, communications, housing, manufacturing, agriculture, and virtually every market where it improperly intervenes. This will allow Americans to enjoy high-quality, competitively-priced goods and services.’

‘Such a small, lean, accountable federal government with a strong military defense would cost no more than a few hundred billion dollars — about 10 percent of current spending levels,’ Sarwark said. ‘This would stop mass surveillance, inflation, destructive foreign wars, the failed drug prohibition, laws that disarm innocent Americans and other infringements on our rights.’

‘Government downsizing would put an end to mounds of wasteful red tape and bureaucracy, allowing American businesses to thrive in a competitive world marketplace,’ he continued. ‘Transferring wealth out of the government sector and into the private sector would create roughly twice as many productive jobs as the number of government jobs lost — a win for both government employees and the millions of Americans looking for jobs or better pay.’

‘What Americans should really fear is the likelihood that, despite the hullabaloo we hear over a phony ‘shutdown,’ the government will stay big and continue to grow,’ Sarwark said. ‘The Libertarian Party exists to correct this. We are the only political party in America dedicated to making government small, enabling prosperity and advancing freedom.’

Resolved, That Barack Hussein Obama be indicted for high crimes and misdemeanors and that the following articles of Indictment be exhibited to the United States Senate

By PETER PATON Resolved, That Barack Hussein Obama be indicted for high crimes and misdemeanors and that the following articles...