Dan Bongino former secret service officer explains that we are asking the wrong question which hopefully will start round two of this Obamagate Spying Scandal.

The real reason is that yes the phony dossier was used to get a warrant but WHY? The current argument is because of “Russian collusion.” No, the answer was that Obama or Clinton or both wanted to spy on Trump and they needed an excuse to be able to do it. The Dossier was just the tool they needed to get that warrant, but there is now rumors that they had been spying on Trump without a warrant for several month prior. Obama and Clinton knew that Trump and his team were totally innocent of any collusion with Russia from the very start. Clinton/Obama used the intelligence community to spy on their opponents, the dossier was just a tool they used to do it. They used the FBI and DOJ and their people who they knew were loyal to them to do their dirty work. Todays memo is just the start to prove the case.

From the day the Donald Trump became president it has been obvious that the Democrat opposition has not opposed the president/Republicans based on policy but have projected raw irrational hatred against the president. The raw hatred has also been corralled through their Democrat bureaucrats within the DOJ and FBI in order to overthrow a sitting duly elected president and prior to the election the same people conspired to stop his election. Based on the evidence in the memo that was released today it is apparent the key leaders of the FBI and DOJ have been plotting to keep Trump from being elected. One just needs to see the few truth-telling news outlets what has been transpiring.

The main issue is the pretext for a special counsel which in itself was a Democrat plot to project a phony idea that Trump colluded with Russia to undermine the presidential election,any person Democrat or not knows there is nothing in the collusion, even Peter Strzok the disgraced FBI agent admitted in his text there was no collusion. Mueller knew in advance as did his whole team. Colluding with Russia in itself is not illegal unless foreign money changes hands and illegal acts of corruption were done by anyone, there was not one shred of evidence to show this had occurred in the Trump campaign. A crime itself needed to be have been committed to order for a special counsel to be appointed. The special counsel was appointed without any crime being mentioned in the ruling signed by Rod Rosenstein and was set up with a conspiracy with Comey, Rosenstein, Mueller and others whose objective was to frame Donald Trump. Rosenstein even stated that no crime had been committed but for “political reasons” the council should be convened. The law concerning special councils was broken by Rod Rosenstein, politics is no business of the Deputy Attorney General, and if it was politics then any investigation should be carried out by the House and Senate intelligence committees. Since everyone knew there was no collusion prior to any special council being appointed the reason for the council was to destroy Trump with a frame up job. The criminal spying on Trump that has now been exposed has interrupted these evil doers wicked scheme.

Let us now also understand that it was James Comey who leaked information illegally (admission of this in is congressional testimony) in order to get a special council appointed. The senior leaders of the Democrat Party i.e. Obama and Clinton knew in advance that the whole Russian Collusion was a Delusion. This had to be known to the leadership of the Democrat party because THEY were doing the spying on Trump as it now has been exposed. They knew before the public and before the Republicans did of the whole picture. The dirty laundry is now being revealed that not only was their no collusion but the Hillary Clinton campaign were illegally colluding (money changing hands with foreign power to create a false document to influence an election) with Russian agents through Christopher Steele (author of the infamous dossier using his Russian agent contacts) to create a fictitious unverified document as well as using their Democrat and anti Trump swamp creatures at the DOJ/FBI to try to frame Donald Trump using the dossier in the FISA court, then using the pretext of the phony document to use as the basis to form a special council. Without the dossier there is nothing to suggest any collusion or probable cause for an investigation.

Mueller based on his experience and knowledge should have known this and should have concluded the investigation if he valued his great “reputation.” Mueller should now be a suspect in a conspiracy to bring down a president knowingly that it was an illegitimate investigation, i.e. TREASON. Further, the presiding FISA judge also needs to be investigated as the bar to spy on an American on American soil is very high, and some legal experts believe that the dossier itself may not have been a sufficient probable cause to grant the warrant to spy on Team Trump, which could have been granted based on a Judge’s bias too. The Judge Rudolph Contreras was forcibly removed from MIchael Flynn case because of his conflict with the FISA court that issued the warrant for spying on Trump, or could it be because he is being investigated on why he granted a warrant in the first place or renewed it on at least three more occasions. We will know the actual facts of this in the coming months.

The initial Russian collision special council was an illegal political move with Rod Rosenstein taking a lead part of the conspiracy based on the fact he ignored the guidelines of the law, since there was no law broken in itself which disqualified the need for any special council in the first place. Further evidence of Rosensteins’s political bias could be forthcoming over the coming months. The truth which is coming out slowly is showing that there was a major conspiracy spear-headed by Obama and Clinton along with leadership in the DOJ and FBI including some leaders in other intelligence services. According to Joe DiGenova, the hero who exposed the initial wire tap irregularities was Admiral Rogers who alerted the FISA court of the FBI shenanigans who were not only knowingly filing a bogus document to gain a FISA warrant as per the memo released today, but was sharing classified information to FBI “contractors” i.e. FUSION GPS and CROWDSTRIKE both working directly for the DNC.

The magic mirror of Democrat projection and blaring hyper hypocrisy has been out there for all to see over the last few days. The Democrats and their left-wing media acolytes have been throwing tantrums accusing the Republicans of everything they are themselves guilty of. “That the release was politically motivated to disrupt the ‘legitimate’ Mueller investigation.” Really! The Mueller investigation was in itself politically motivated because the Deputy AG Rod Rosenstein said that himself. “How dare the Republicans impune the character of our great FBI and law enforcement officials,” excuse me, but when was the last time a Democrat defended our law enforcement officials. For the last eight years of the Obama administration we have been told how brutal and racist our police forces are, and how they kill black people indiscriminately. Then there is the argument used that publishing the memo would “hurt national security.” We just have to go back two weeks and see Democrat Senator Feinstein leaking a classified document concerning Fusion GPS which is a criminal offense and used the excuse that she had a cold, yet two weeks later she is spouting about how this memo released today would hurt national security. The wacko “main stream” media have one rule for Democrats and another for Republicans/conservatives as they try to cover for Democrat shameless behaviour. What type of fools do they think we are? Obviously they do in the way they currently present the news.

The Memo that was released today is simple and straight forward. It does not expose methods or sources. All it does 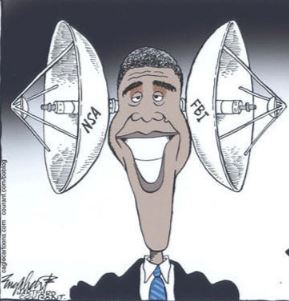 confirm based on documents reviewed by the Intel committee given to them (a year too late) from DOJ and FBI what most level-headed people have thought and has now been confirmed; that the DOJ and FBI conspired to stack the deck against Donald Trump and when they lost tried further with their phony special council. The effort to go too far with this illegal and illegitimate special council has been the undoing of the Swamp. Their blind and irrational hatred is now being exposed as criminal and corrupt. There is much more to come!

Fortunately for We THE PEOPLE and unfortunately for the Swamp; information has now been obtained through patriots behind the scenes and the reporting of Sara Carter, John Solomon, Joe Di Genova along with the platform of some balanced media and conservative blogs. With these patriots we maybe able to restore our government to more honorable circumstances and hopefully also restore the full protections of the Fourth Amendment.

In Case You Missed It:  10,000 Votes Dropped on Friday Morning Giving Maryland US House Seat to the Democrats
Posted in Tyranny and tagged Crime, Democrat, FBI, nsa, Obama.

Is Democratic ideology destroying black families? By Lloyd Marcus I am a 69-year-old proud American who happens to be black. The...