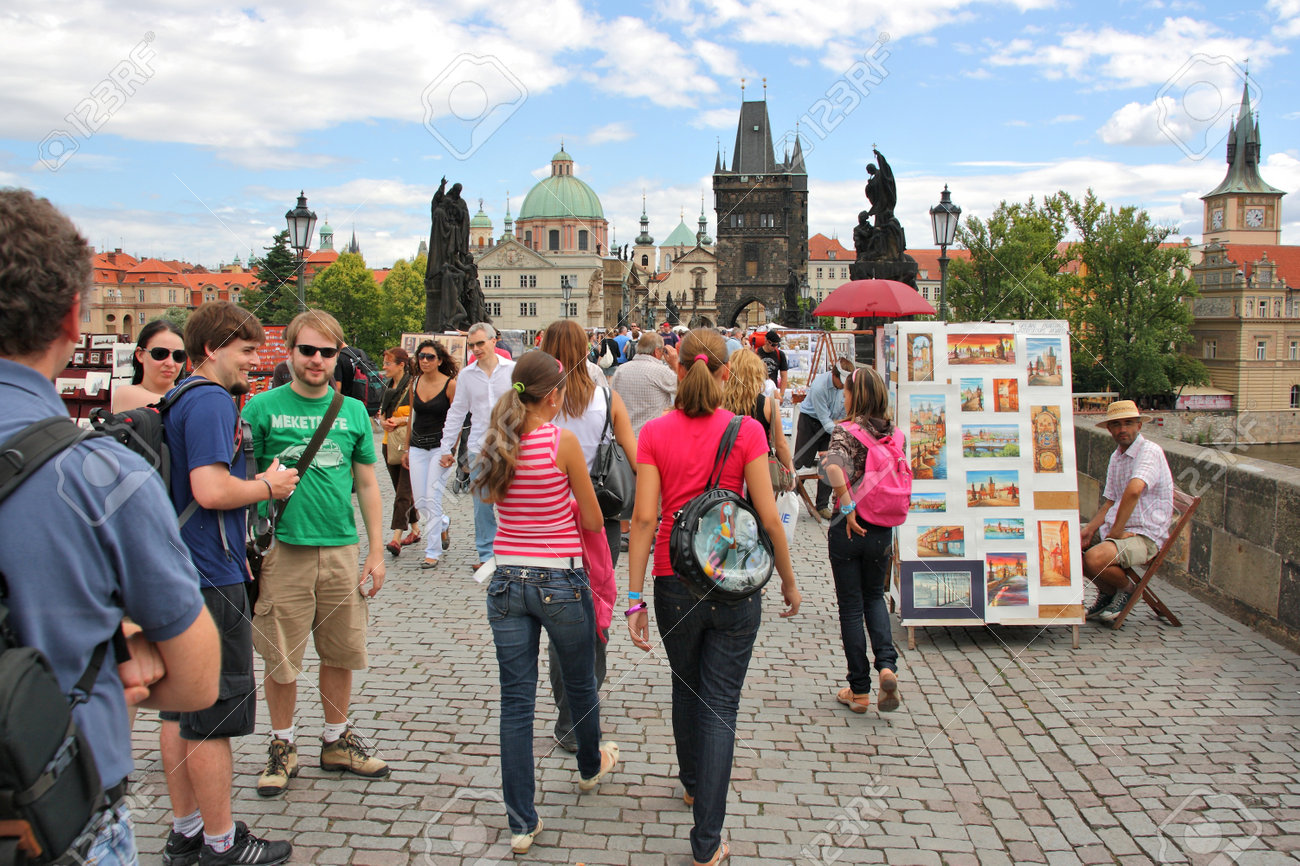 Tuesday, February 20. It’s our first time in Prague, and – except for a couple of visits to Berlin – K.’s first time on territory that was once part of the Warsaw Pact. Today, as we’re wont to do on arrival in a new city, we passed on museums and other cultural attractions, preferring instead to walk and walk and walk – to get a sense of the place and the people and start finding our way around.

After several hours of wandering along the winding streets and across cobbled squares dominated by churches, we came back to our hotel and had a drink at the bar. After two gin and tonics, I saw that K. had tears in his eyes. I looked at him quizzically. He could hardly get the words out.

“I’m so angry at my country’s government!” he finally exploded.

The country in question being Norway.

K. explained. We had just seen a good deal of Prague, and had passed heaven knows how many thousands of people. Not once had we seen a hijab. Let alone a niqab or burka.

“In this whole big city, not one!” he cried. “And yet in that little town where we live – in the middle of nowhere! – you can’t look out of the window for a minute without seeing one.”

For us, the Islamization of Western Europe had been a constant topic of conversation for almost twenty years. We’d voiced anger, frustration, despondency, cynicism. But I’d never seen him get teary-eyed about it.

We lived in Oslo for twelve years. During that time, its Muslim population grew steadily. And so did the percentage of Muslim women in head coverings. During our first years in Oslo, we never saw a niqab, which covers everything but the eyes, or a burka, which covers even the eyes. Gradually, however, both became familiar sights.

Seven years ago we moved to the small town where we now live. It, too, has become supersaturated with hijab – and the occasional niqab.

In 2002, I was called an alarmist. Yet if you’d asked me back then whether, sixteen years later, it would be impossible to walk a few blocks down the main street of a remote Norwegian burg like ours without seeing a hijab, I would’ve said no: the transformation won’t happen that fast.

How wrong I was!

Over the years, we’ve traveled extensively in Western Europe, to other places where the same process of Islamization is underway. After a while it all seems almost natural – the bearded men in djellaba, the women in hijab, the ubiquitous strollers and baby carriages and armies of children, some of the tiny girls also wearing hijab.

But now here we are in Prague, and for K. the utter lack of any Islamic presence here is little short a revelation. He’s been intensely aware all along of what’s happening to his country, but now, in Prague, the horror of it has hit him like a punch to the gut.

In the morning, I take yet another long walk, and pass families who I realize are heading home from shul. There are several synagogues in the neighborhood. One Jewish toddler runs gleefully down the sidewalk, and his father chases him and sweeps him up in his arms. He catches me smiling and smiles back. There is no sign of the fear that increasingly causes Jews in Western European cities to keep a low profile, to forego their yarmulkes, to move to the U.S. or Israel. Jews are safe here.

Sitting here in our hotel room, I check some Norwegian news sites on my laptop. At document.no, I read that Oslo’s police chief, Janne Stømner, denies any link between the skyrocketing crime rate in east Oslo and the rise in the immigrant population. (I examined this crisis recently in City Journal.) The perpetrators of crime, she insists, are “our own teenagers.”

According to Resett, the audience of Oslo cultural-elite types cheered lustily.

(This statement wasn’t out of character for Ali. Recently, she tweeted: “F**k diplomatic debate. F**k the police.”)

Finally, rights.no featured an article by Hege Storhaug about Somalis who’ve been allowed to settle in Norway on the pretext that they come from a failed state – but who send their kids to schools in that “failed state” to shield them from Western values. This widespread phenomenon was discussed on TV the other day by, among others, Progress Party politician Jon Helgheim, who, Storhaug noted, had nothing critical to say about it.

“We were told that if we voted for FrP,” K. said earlier at the hotel bar, using the Norwegian acronym for the Progress Party, “that things would change. But nothing has changed!” He’s right. For years, the Progress Party promised, if voted into power, to rescue Norway from insane immigration policies. Well, they’re now part of the government. FrP leader Siv Jensen is Minister of Finance. Listhaug is an FrP member, and she talks tough. But what substantial steps has her party taken to reverse Norway’s race toward doom? None.

Norway has leverage in the EU. It pours billions into that rathole. But the Czech Republic is a net beneficiary of EU largesse. Nonetheless, along with Hungary and Poland, it’s bravely standing up to EU pressure to join in Western Europe’s self-destruction. In this country of 10.5 million people, only 3500 are Muslims. In Prague, therefore, K. and I are able to experience a poignant reminder of what cities like Oslo were, not all that long ago – and what they could still be now, if not for the feckless fools who rule them.

Monday, February 26. We return home. Total number of women in hijab observed during a week in Prague: zero. Number of minutes, upon arrival back in Norway, before I caught sight of one: zero.

She was at baggage claim at the Oslo Airport.

In Case You Missed It:  A CONTAGION of COURAGE is spreading across America as pilots, police, firefighters and other workers say, "Take this JAB and SHOVE it!"
Posted in Freedoms and tagged Czech Republic, Europe, Immigration.

California has worst ‘quality of life’ in US, study says

By Gregg Re, Christopher Carbone | Fox News Awards season is in full swing in California, and the Golden State just...