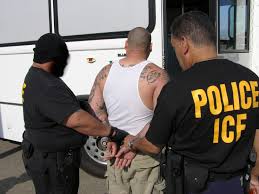 In a victory for the Trump administration, illegal immigrants and even non-citizens with legal status can be held indefinitely without receiving a hearing:

Immigrants can be held by U.S. immigration officials indefinitely without receiving bond hearings, even if they have permanent legal status or are seeking asylum, the Supreme Court ruled Tuesday.

In a 5-3 ruling Tuesday, with Justice Elena Kagan recusing, the court ruled that immigrants do not have the right to periodic bond hearings.

The ruling is a defeat for immigration advocates, who argued that immigrants should not be held for more than six months at a time without such a hearing.

The Supreme Court ruling follows a Trump administration appeal of a ruling by the 9th Circuit Court of Appeals last year that imposed a rule requiring immigrants held in custody be given a bond hearing every six months, as long as they aren’t considered a flight risk or a danger to national security.
“To impose a rigid six-month rule like the Court of Appeals did is really a mistake,” acting Solicitor General Ian Gershengorn said in November 2016.

In its ruling, the court affirmed the right of the government to detain immigrants while it determines whether they should be allowed in the country.

“Immigration officials are authorized to detain certain aliens in the course of immigration proceedings while they determine whether those aliens may be lawfully present in the country,” Justice Samuel Alito wrote in the majority opinion.

The lead plaintiff in the class-action lawsuit, Alejandro Rodriguez, is an immigrant with permanent legal status who was convicted of possession of a controlled substance and joyriding. He was detained by immigration officials for three years without a bond hearing.

The ACLU took up his case, eventually winning his release and the cancellation of his deportation order. The government’s appeal was begun under the Obama administration, and continued after President Trump took office last year. (source)

We have pointed out that US immigration policy is an extension of political manuvering. The “immigration crisis” that the US has is non-existent. What exists is that the government wants, encourages, and facilitates illegal immigration in order to support agribusiness, which is a kingpin of American foreign policy. Basically, the USA facilitates illegals to come into the USA to work in miserable and difficult jobs that for the most part Americans choose not to work in, and those Americans who do often come from less-than-reputable segments of society, as the jobs are lower paying. Mexicans, Guatemalans, and other central American people line up for thembecause in nations where the average income is between $1500 to $4000 US per year, the chance to earn even minimum wage means doubling one’s annual income.

The above number assumes working minimum wage at a 40-hour a week job, which is not most farm or factory jobs, as many of them are able to work around the clock. Doing this, many can earn two, three, or four times their annual income in a matter of months. Even if they do not do this, the income that can be earned in greater than what they would make in their own nations.

All of the talk about “raids,” “ICE,” and “enforcement” are real in that raids are conducted. Yet these are not for enforcement of the law, but for political reasons. As is common in government, laws are enforced in the capacity and to the extent of giving the impression that something is being done when the reality is that nothing will change. The “war on drugs” and “war on terror” are excellent examples of this- drugs still flow into the USA, and America is still “fighting terrorism,” all the while the US government is the biggest protector of Afghan poppies from which much opium is made at the same time it backs the drug cartels of Central America, and add to that how the government admits it created and funds terrorist groups such as the Taliban or ISIS for political ends.

Anybody who says that illegal immigration is going to “stop” now because “President Trump said so” is deceived, for as he has shown over the course of now in his second year of office he is continuing the same policies of Obama, Bush II, Clinton, and Bush I. These are the policies of, in addition to the situation with illegal immigration, those of military expansionism, the erosion of civil liberties, the general impoverishment of society, and an increase in military spending for the purpose of perpetuating war around the world.

Look at it this way. During the Reagan years, America invaded by direct force or proxy Central America, Afghanistan, Iraq, Lebanon, Libya, and Grenada. Under Bush I, invasions included Iraq during the Gulf War and Panama. Under Clinton were the invasions of Bosnia, Haiti, and sanctions against Iraq. Bush I famously began the “War on Terror” that brought the US into and still involved to this day in Afghanistan and Iraq as well as military interference in the Philippines, Georgia, Djbouti, Liberia, Haiti (again), Pakistan, and Somalia. Obama continued the previous policies of Bush but expanded them to include American invasions and overthrows of Ukraine, Libya, Tunisia, Syria, as well as a US presence all throughout the Middle East and North Africa.

Under Trump, ALL of the previous military interference has not changed- the US is still in all the countries that Obama invaded. Now, however, the US military is making more aggressive threats against Iran and North Korea and is, as we have reported, assisting with the military arming of Japan, Germany, and Turkey. Fundamentally speaking, there is no change in philosophy or approach between Trump and his predecessors. Like changing the gears on a machine, only the faces have changes but the function of the machine has not.

The American war machine is the most visible and powerful expression of US foreign policy (as it is for every country). If this has not changed, then how will the situation with illegal immigration change, for as we noted, it is part of the system of cheap labor that subsidizes the agribusiness industry which is used to control the food supply of other nations among other functions?

The only effect this law is going to have is to be another step in the erosion of civil liberties. Many will support it because it is targeted against “illegals,” who are a group that many people do not like. However, the real aim is not about “illegals”- it’s about YOU, the average citizen, and further reducing you to a state that is beneath that of a serf through the creation of laws that enforce such a precident that further confirms the idea that people can be held indefinitely without due legal process, for as the law notes, it does not include just “bad illegals,” but legally arrived non-citizens without cause.

It’s making you accept and love the laws that are inevitably used to, in time, chain you into slavery by giving it a socially palatable taste.

“Illegals,” just like “criminals,” “drug dealers,” and other groups on fringes of society are a convenient excuse for those who desire power at all costs with respect to no man to pass laws in the name of “safety” and “security.” But such laws, while some are necessary, for the most part are nothing but excuses for acquiring power. In the words of Samuel Adams:

“If ye love wealth better than liberty, the tranquility of servitude better than the animating contest of freedom, go home from us in peace. We ask not your counsels or arms. Crouch down and lick the hands which feed you. May your chains set lightly upon you, and may posterity forget that ye were our countrymen.”

In Case You Missed It:  After the GENOCIDE: Will there be enough VACCINE SURVIVORS to rebuild civilization?
Posted in Freedoms and tagged Illegal Immigration.

GLIMPSING THE “NEW EUROPE” IN PRAGUE

Bruce Bawer Tuesday, February 20. It's our first time in Prague, and – except for a couple of visits to Berlin...