The President must get Congressional approval before attacking Syria-big mistake if he does not!

Update 7:  Russia responds. Here is the full statement posted by Russia’s ambassador to the US, Anataoly Antonov:

The worst apprehensions have come true. Our warnings have been left unheard.

A pre-designed scenario is being implemented. Again, we are being threatened. We warned that such actions will not be left without consequences.

All responsibility for them rests with Washington, London and Paris.

Insulting the President of Russia is unacceptable and inadmissible.

The U.S. – the possessor of the biggest arsenal of chemical weapons – has no moral right to blame other countries.

Update 6: The White House has released the list of US demands from Assad regime

Another footage of Syrian air-defense missile fired towards tomahawk rockets in the sky of Damascus. pic.twitter.com/7FVcXN5i2F

Update 4:  Joint Chiefs chairman Dunford said that while the strikes sought to minimize risk of Russian casualties, the US did not pre-notify Russia of the Syria strikes; separately Mattis said that double the number of weapons used compared to last year’s Syria strike – when 59 Tomahawk missiles were launched.

Update 3: at 10PM ET, Defense Secretary Mattis and Joseph Dunford, the Chairman, Joint Chiefs of Staff provided the Pentagon’s update, repeating that U.S., British and and French forces struck Syrias chemical weapons infrastructure tonight. Mattis said that “Clearly, the Assad regime did not get the message last year. This time, our allies and we have struck harder.” 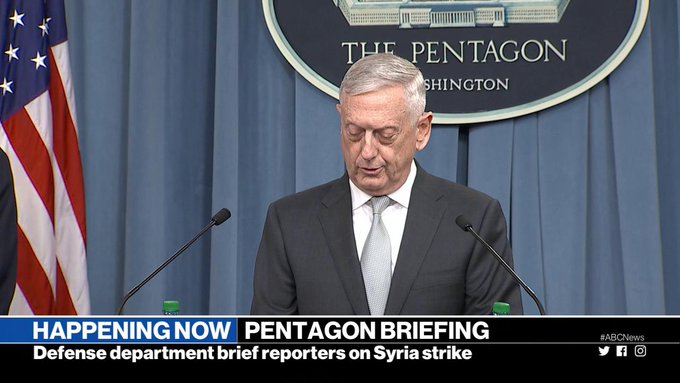 Defense Sec. Mattis: “Clearly, the Assad regime did not get the message last year. This time, our allies and we have struck harder.” https://abcn.ws/2EKdtUU

Mattis adds that “I want to emphasize these strikes are directed at the Syrian regime. In conducting these strikes, we have gone to great lengths to avoid civilian and foreign casualties.”

Then, Dunford said that the first target was a Syrian research facility, and adds that the US selected targets that would minimize risk to innocent civilians. He adds that attacks on multiple sites of Syria chemical weapons infrastructure “inflicted maximum damage.”

In total, Targets were specially associated with the Syrian regime’s CW program. These included:

The third target, which was in the vicinity of the second target, contained both the chemical weapons equipment storage facility and an important command post.”

Meanwhile, the White House said that the US is confident the Syrian regime was behind the chemical weapons attack, based on:

Update 2: Witnesses are reporting explosions heard in Damascus, including residential areas, although the first wave of US, UK and French attacks is allegedly targeting the following: 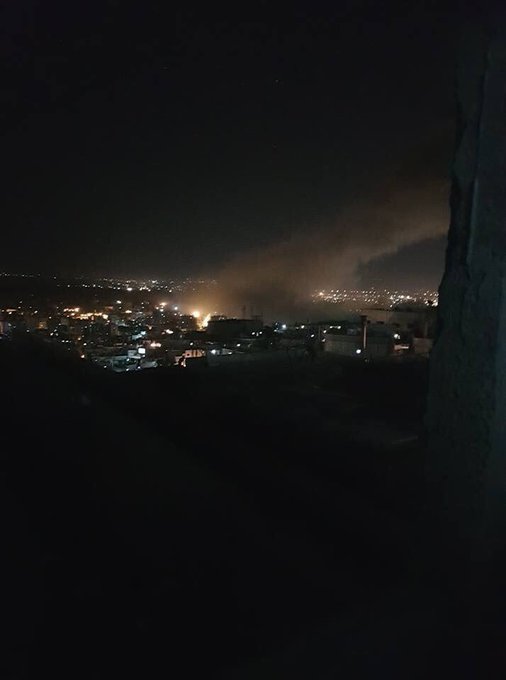 BREAKING: Civilian casualties are being reported in Damascus as at least 2 residential areas have been struck by the US-led force’s missiles. At least 4 dead in one of the strikes.

Meanwhile, Reuters adds that a total of three scientific research centers struck in the attack.

According to media reports in addition to American ships, Tomahawk missiles and aircraft – including B-1 bombers, leading the attacks, four British Tornado GR4s have targeted a military facility in Homs with Storm Shadow missiles.

While unconfirmed, Syria state TV claims that it shot down 13 missiles near Damascus. 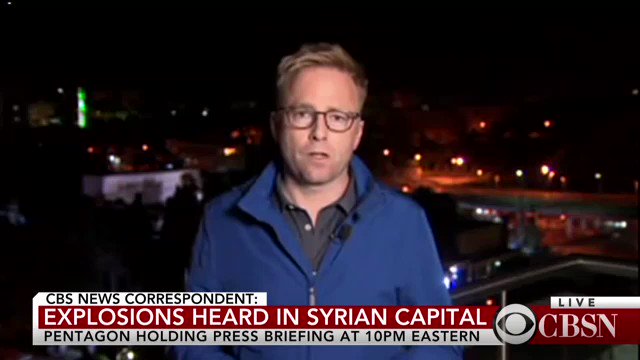 “It’s a real cacophony of sounds early this morning,” @sethdoane reports on the ground in Damascus — the only U.S. network journalist inside Syria — as he describes cars blaring music and waving Syrian flags https://cbsn.ws/2GYqiRP 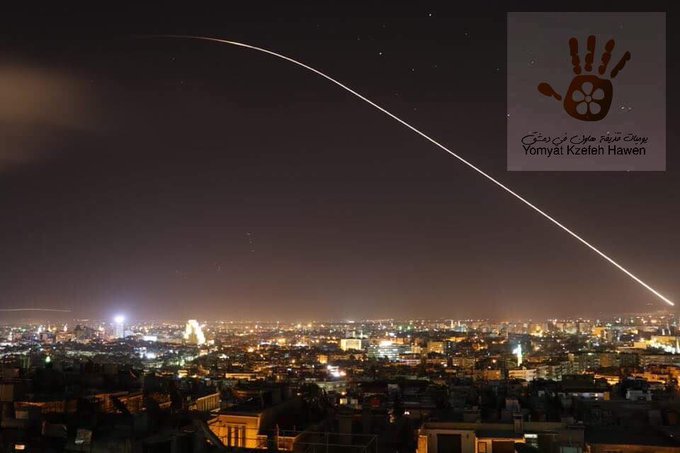 Photo from Damascus moments ago as U.S., France and Britain conduct heavy strikes in Syria tonight.

Photo taken from a facebook video minutes ago. pic.twitter.com/HMpajeehCS 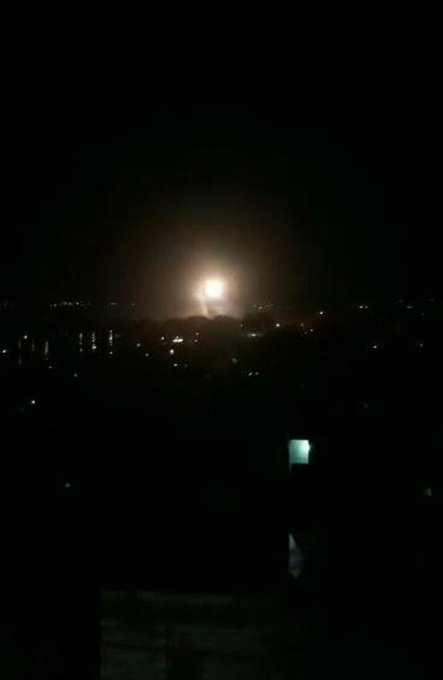 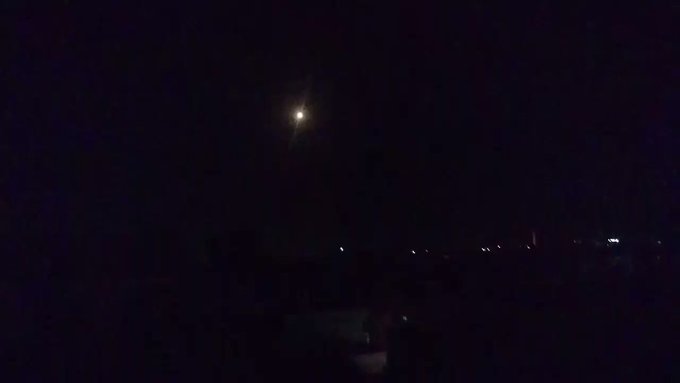 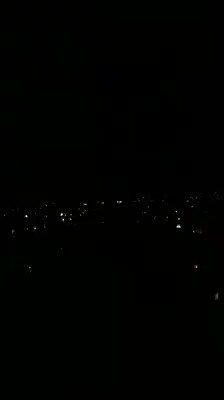 Pentagon: There will be a press briefing at 10 p.m. EDT, tonight, April 13, in the Pentagon Briefing Room on operations in Syria.

Update 1: President Trump has now confirmed that in a combined operation with France and UK, a military strike is now under way against Syria…

“A short time ago, I ordered the United States Armed Forces to launch precision strikes on targets associated with the chemical weapons capabilities of Syrian dictator, Bashar al-Assad.”

“This massacre was a significant escalation in a pattern of chemical weapons use by that very terrible regime.”

“These are not the actions of a man; they are crimes of a monster instead.”

“The combined American, British, and French response to these atrocities will integrate all instruments of our national power, military, economic, and diplomatic.”

“We are prepared to sustain this response until the Syrian regime stops its use of prohibited chemical agents.”

“In 2013, President Putin and his government promised the world that they would guarantee the elimination of Syria’s chemical weapons.”

“Assad’s recent attack and today’s response are the direct result of Russia’s failure to keep that promise. Russia must decide if it will continue down this dark path or if it will join with civilized nations as a force for stability and peace.”

“The United States will be a partner and a friend, but the fate of the region lies in the hands of its own people.”

“Tonight, I ask all Americans to say a prayer for our noble warriors and our allies as they carry out their missions. We pray that God will bring comfort to those suffering in Syria.”

Theresa May has commented: 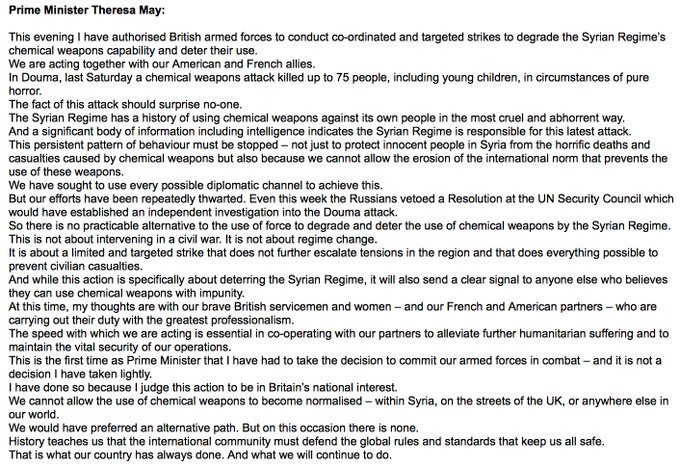 JUST IN: British Prime Minister May authorizes strikes against Syria: “The fact of this attack should surprise no-one.”

“There is no practicable alternative to the use of force to degrade and deter the use of chemical weapons by the Syrian Regime.” https://abcn.ws/2GWZ6CN

Mr. Trump has threatened military action against Syria for days as retaliation for a suspected chemical weapons attack by the forces of President Bashar al-Assad on a Damascus suburb last week.

With two Tomahawk-capable destroyers in The Mediterranean Sea, and following “highly confident” intel that Syria launched the chemical attack, NYTimes reports that President Trump is expected to make a statement about Syria on Friday evening at the White House, an administration official said.

Additionally,  Gateway Pundit’s Josh Caplan reports that Vice President Mike Pence was seen “‘rushing back” to his hotel in Peru amid speculation about possible U.S. military action in Syria.

FOX News reports that President Trump has approved military strikes on Syria and is set to announce them within 30 minutes.

The Donald Cook and The Winston Churchill are capable of carrying up to 150 Tomahawk missiles between them (last April Trump fired 59 Tomahawks into Syria).

As a reminder, here is the largest missile diplomacy strikes from Washington…

In Case You Missed It:  Durham Probes Pentagon Computer Contractors in Anti-Trump Conspiracy
Posted in Tyranny and tagged Syria.

Event is meant to help ethnic minorities ‘build a community free from White People’ A racist private college in California...