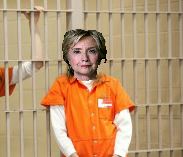 It is yet another facet of the plot by which Clinton, possibly in league with then-President Obama, broke the law in an attempt to rig the election. Throughout his agonizingly long presidency, Obama serially abused his powers as the nation’s Chief Executive to undermine his political opponents.

Against this backdrop, the DNC and Hillary’s campaign “allegedly used state chapters as strawmen to launder as much as $84 million in an effort to circumvent campaign donation limits, and the Federal Election Commission ignored complaints exposing the practice,” according to a Fox News report that has been gathering dust since April 16.

The civil proceeding, filed against the FEC earlier this month in the nation’s capital, spells out a vast left-wing criminal conspiracy while providing detailed evidence from FEC filings to support the claim that Democrats orchestrated the scheme to do an end-run around federal campaign limits.

The Stop Hillary PAC, also now known as the Committee to Defend the President (CDP), filed a complaint in December with the FEC stating that the Hillary Victory Fund (HVF) sought funds from high-profile donors and then “sent that money through state chapters and back to the DNC before ending up with the Clinton campaign.”

The complaint went nowhere and the political action committee got tired of waiting.

“The Clinton machine has escaped accountability for its illegal practices for far too long,” said CDP chairman Ted Harvey. “After months of review, the FEC has refused to address the Clintons’ $84 million money laundering scheme that violated several campaign finance laws.”

The federal lawsuit names the FEC as a defendant, claiming its failure to act was “arbitrary, capricious, contrary to law, and an abuse of discretion.”

Harvey’s group is asking the court to use its authority under the Federal Election Campaign Act “to step in and demand action from the FEC,” Harvey said. “The American people demand that our most corrupt political figures answer for their transgressions.”

“Based on publicly available FEC records, repeatedly throughout the 2016 presidential campaign, HVF would purportedly transfer funds to its constituent political committees, which included between 34 and 40 state parties,” reads a passage from a copy of the complaint. “On the very same day each of these transfers supposedly occurred, or occasionally the very next day, every single one of those state parties purportedly contributed all of those funds to the DNC.”

The complaint filed against the FEC said previous reports showed a series of transactions in which the HVF disbursed contributions to its state party committee members—and they would receive the funds on the same day. The HVF would also allegedly disburse funds to up to 40 state parties at the same time, and those parties would send the money back within 24 hours.

Anyone who has followed the Clintons over the years from Whitewater to Bill’s “bimbo eruptions” to Uranium One is bound to be unsurprised by the money-laundering allegations. If you’re a Clinton, you raise huge sums of money and then use sleight-of-hand to make the ill-gotten gains disappear. Birds gotta fly, fish gotta swim, and Clintons gotta grift.

We already knew that Hillary Clinton used hacker-friendly “home brew” Internet servers while running the State Department to conceal the corrupt dealings of the anticipatory presidential bribe clearinghouse known as the Bill, Hillary and Chelsea Clinton Foundation and to evade her disclosure responsibilities under the Freedom of Information Act.

She also personally approved a series of illegal schemes and dirty tricks including fomenting violence at Trump rallies to create the false impression that his campaign and supporters were violent, crazy people and at the same time provide evidence to support the Left’s narrative that the billionaire businessman was a dangerous fascist.

And don’t forget the wacky Russian “piss-gate” dossier assembled by Trump-hating British ex-spy Christopher Steele that was paid for by Hillary’s campaign and the DNC.

Even though Special Counsel Robert Mueller is intensely interested in money-laundering allegations, he doesn’t seem too interested when Democrats are implicated.

Trump campaign leaders Paul J. Manafort Jr. and Richard W. Gates III were investigated by Mueller for money laundering wholly unrelated to the campaign. Two months ago Gates accepted a deal from Mueller and pled guilty to financial fraud and lying to investigators.

Also on Fox, George Washington University law professor Jonathan Turley said that Cohen has a reputation for recklessness and that he was surprised the attorney was still representing the president. Interestingly, Turley also noted that Michael Avenatti, Daniels’ attorney who has caused Trump’s handlers so much heartburn, used to be his law student. Avenatti is “an adrenaline junkie,” Turley previously said.

One of the reasons for Andrew McCabe’s current legal troubles is the suspiciously large $675,000 payment the campaign of his wife, Jill McCabe, who ran for the Virginia State Senate in 2015, received from the state’s Democratic Party and a political action committee of then-Virginia Gov. Terry McAuliffe (D), a longtime Clinton crony. Was the payment a kind of veiled bribe to McCabe to do or not do something at the Justice Department? We may never know.

McCabe was acting director of the FBI from May 9, 2017, when President Trump fired then-director James B. Comey, through Aug. 2, 2017, when new director Christopher Wray took over. McCabe was fired for gross misconduct by Attorney General Jeff Sessions on March 16 of this year and is planning to launch a series of frivolous lawsuits for wrongful dismissal, and possibly against Trump and Comey, for defamation.

McCabe’s bloviating lawyer, Michael Bromwich, sputtered that the president and critics are slandering McCabe and that this is hurting the FBI. “We’ve never seen anything like this before,” he said. “It does damage not only to Andy McCabe individually but also to the FBI as an institution.”

Meanwhile, as of last week the Democratic National Committee is suing Russia and WikiLeaks in a breathtakingly stupid effort to keep the fading Trump-Russia electoral collusion conspiracy theory alive. In such a lawsuit, defendants are entitled to go on evidentiary fishing expeditions (i.e. the discovery process) and given how dirty the DNC is, who knows what they might find.

“This is a sham lawsuit about a bogus Russian collusion claim filed by a desperate, dysfunctional, and nearly insolvent Democratic Party,” said Brad Parscale, campaign manager for Trump’s 2020 reelection effort.

The Trump campaign expects to use the discovery process to examine “actual corruption” by the DNC to “influence the outcome of the 2016 presidential election.”

Trump tweeted that the lawsuit from “the Obstructionist Democrats” was likely “good news” for his campaign because “we will now counter for the DNC Server that they refused to give to the FBI.”

This could be fun.

by Andrew Bieszad In recent news, Egyptian police are reported to be using gay dating apps to hunt down and arrest...