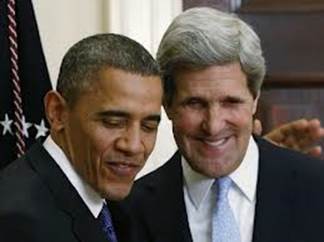 You didn’t really think he’d hold his tongue, did you?

Remember, the Iran nuclear deal was never even submitted to the U.S. Senate for ratification as a treaty. It was strictly an executive agreement between Obama’s administration and the Iranian regime. If he had wanted it to be treated like a treaty, Obama could have sought ratification. He didn’t because he knew it wouldn’t have a prayer, and also because any debate on ratification would have revealed what a bad deal it was for the United States.

Yet he still goes into a snit over Trump’s decision to pull out of the deal, and comes forth with the usual nonsense arguments about how the deal is working and Iran is complying. Yeah, none of that’s true, but it’s like a trip down memory lane to hear it asserted this shamelessly:

First, the JCPOA was not just an agreement between my Administration and the Iranian government. After years of building an international coalition that could impose crippling sanctions on Iran, we reached the JCPOA together with the United Kingdom, France, Germany, the European Union, Russia, China, and Iran. It is a multilateral arms control deal, unanimously endorsed by a United Nations Security Council Resolution.

Second, the JCPOA has worked in rolling back Iran’s nuclear program. For decades, Iran had steadily advanced its nuclear program, approaching the point where they could rapidly produce enough fissile material to build a bomb. The JCPOA put a lid on that breakout capacity. Since the JCPOA was implemented, Iran has destroyed the core of a reactor that could have produced weapons-grade plutonium; removed two-thirds of its centrifuges (over 13,000) and placed them under international monitoring; and eliminated 97 percent of its stockpile of enriched uranium – the raw materials necessary for a bomb. So by any measure, the JCPOA has imposed strict limitations on Iran’s nuclear program and achieved real results.

Third, the JCPOA does not rely on trust – it is rooted in the most far-reaching inspections and verification regime ever negotiated in an arms control deal. Iran’s nuclear facilities are strictly monitored. International monitors also have access to Iran’s entire nuclear supply chain, so that we can catch them if they cheat. Without the JCPOA, this monitoring and inspections regime would go away.

Fourth, Iran is complying with the JCPOA. That was not simply the view of my Administration. The United States intelligence community has continued to find that Iran is meeting its responsibilities under the deal, and has reported as much to Congress. So have our closest allies, and the international agency responsible for verifying Iranian compliance – the International Atomic Energy Agency (IAEA).

Fifth, the JCPOA does not expire. The prohibition on Iran ever obtaining a nuclear weapon is permanent. Some of the most important and intrusive inspections codified by the JCPOA are permanent. Even as some of the provisions in the JCPOA do become less strict with time, this won’t happen until ten, fifteen, twenty, or twenty-five years into the deal, so there is little reason to put those restrictions at risk today.

Regarding point number one, so what? The other nations involved in the deal had their own motivations for signing it. It is not and never was in the interests of the United States, which is the only country Trump was elected to govern.

Regarding points number two, three and four, if you think the deal is working, or that Iran is complying, how do you explain this?

Regarding point number five, it’s absurd to call the prohibition permanent when the inspection regime becomes weaker over time, and it’s not so great today in spite of what Obama claims.

Like much of the world, Obama simply ignores all the reasons to believe Iran was cheating in the deal, and that it wasn’t working out as swimmingly as he wants everyone to think it was:

The only way that’s true is if Iran’s compliance requires so little that the deal is meaningless, which is a direct result of the way John Kerry negotiated it. He knew Iran wouldn’t sign if they had to take the kinds of steps described above in reference to South Africa and Libya, or if they had to accept real, unfettered inspections. So Kerry insisted on far less to get Iran to sign, and now claims Iran is “in compliance.” Netanyahu’s evidence says otherwise, but even if Iran was technically in compliance, the deal didn’t actually require much to make that so.

So let Obama and Kerry have their snits. They negotiated a terrible deal and Trump is right to put it in the circular file and start over. The next time we do a deal with Iran, let’s hope it’s negotiated by an administration that prioritizes America’s best interests – not those of the mad mullahs of Iran.

In Case You Missed It:  Vaccine mandate being used to gut America's weapons research assets by firing top scientists at Los Alamos
Posted in Freedoms and tagged Iran, Obama.

President Donald Trump on Tuesday submitted a special message to Congress requesting that $15 billion in unspent funding be rescinded....