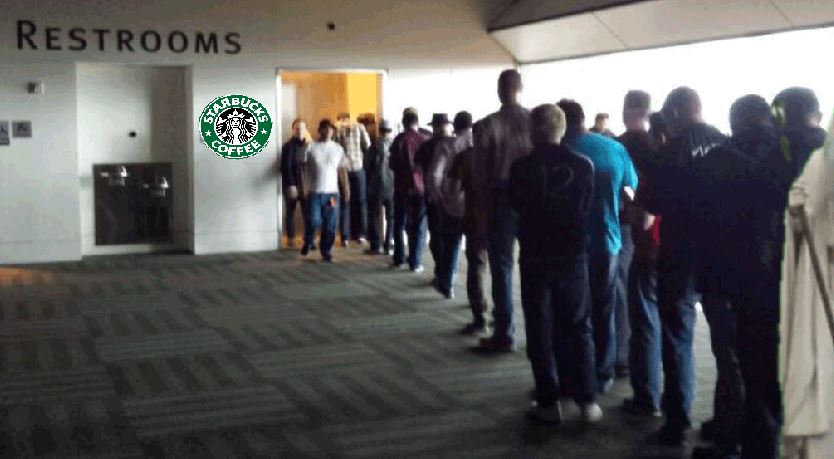 Starbucks suddenly finds itself in the hospitality business in the wake of  two black men were denied the use of a bathroom and later arrested by police while waiting for an associate in a Philadelphia location.

Now, thanks to a new policy announced by executive chairman Howard Schultz at the Atlantic Council on Thursday, any and all who wish to unburden themselves or simply take an invigorating sink shower at any of Starbucks’ nearly 27,000 locations – whether they are paying customers or not – can make use of Starbucks’ repenting facilities.

While Schultz told the audience “we don’t want to become a public restroom,” he added “But we’re going to make the right decision a hundred percent of the time and give people the key, because we don’t want anyone at Starbucks to feel as if we are not giving access to you to the bathroom because you are ‘less than. ‘We want you to be ‘more than.'”

As Schultz unveiled his business mode pivot, he told the audience that the world is “questioning the moral leadership of America” and, ironically, urged the public to reject nationalism.

In the afternoon, Schultz participated in a discussion on “The Role and Responsibility of a Global Company,” in which he addressed the controversy surrounding the arrest of two African-American men inside of a Starbucks store in Philadelphia.

“Our stores are not public bathrooms, but they’re used as such. In this particular case, two African-American gentlemen came in the store – like millions of other people – to sit down and have a meeting and one of them asked to go to the bathroom and we have kind of a loose policy around you should be able to use the bathroom if you buy something and it’s really the judgment of the manager. And in this particular case, she asked the gentleman: Are you a customer? And he said, no. And they go into a conversation and one thing led to another, and she made a terrible decision to call the police,” Schultz recalled, in the context of Schultz virtue (or perhaps virtually) signaling the rejecting nationalism.

Video of the Philadelphia arrest went viral, sparking public outcry against the coffeemaker along with accusations of racism.

@Starbucks The police were called because these men hadn’t ordered anything. They were waiting for a friend to show up, who did as they were taken out in handcuffs for doing nothing. All the other white ppl are wondering why it’s never happened to us when we do the same thing. pic.twitter.com/0U4Pzs55Ci

In the aftermath of the incident, the manager who called the police was fired, and each of the two men settled with the city for $1 each and the promise of a $200,000 young entrepreneur program organized by local officials.

In addition to the bathroom policy, Starbucks will be closing more than 8,000 U.S. shops on May 29 to train nearly 175,000 employees in “racial bias education.”

“I’ve spent the last few days in Philadelphia with my leadership team listening to the community, learning what we did wrong and the steps we need to take to fix it,” said Starbucks ceo Kevin Johnson in an April statement. “While this is not limited to Starbucks, we’re committed to being a part of the solution. Closing our stores for racial bias training is just one step in a journey that requires dedication from every level of our company and partnerships in our local communities.”

COO Rosalind Brewer, a black woman, told NPR that the incident was “a teachable moment for all of us,” saying that as an African American executive who has a 23-year-old son, she found the viral videos of the incident painful to watch.

“It would be easy for us to say that this was a one-employee situation, but I have to tell you, it’s time for us to, myself included, take personal responsibility here and do the best that we can to make sure we do everything we can”

In this case, “everything we can” means all Starbucks bathrooms are now open

In Case You Missed It:  New study on 41,000 people reveals that taking vaccines INCREASES a person's risk of hospitalization
Posted in Freedoms.

The Congress must protect the sanctions against Iran: The EU is trying to keep the Iran deal alive and wait for the next US President to rejoin

The Congress must protect the sanctions against Iran: The EU is trying to keep the Iran deal alive and wait...