A Hamas official has claimed that 50 members of the Palestinian terror group were among those killed by Israeli fire during Monday’s mass protests at the Gaza border. 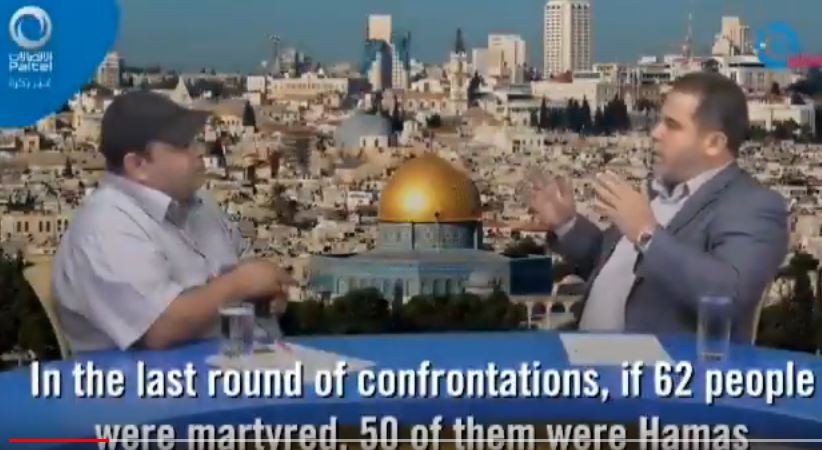 Hamas leader Salah Bardawil said in a televised interview that of the “62 people martyred, 50 were Hamas.”

IDF spokesman Jonathan Conricus shares the interview on Twitter, pointing to it as proof that the so-called peaceful protests were orchestrated by the terror group.

“Take his word for it. This was no peaceful protest,” Conricus writes.

Israel earlier said 24 of those killed were members of terror groups, most of them from Hamas. On Tuesday, Hamas named 10 people from the group who were killed in the fighting.

The Hamas leader’s claim of 50 members brings the total of terrorists killed on Monday up to 53. The Iran-backed Palestinian Islamic Jihad named three of its members on Monday who were killed in the riots.

Despite admitting that Hamas members were killed in the so-called Great March of Return, Bardawil claimed that Palestinian civilians, not the terror group, initiated the protests. Israeli intelligence, however, said the terror group has encouraged civilians, especially teenagers and children, to approach the Israeli border, while Hamas terrorists hung back and waited for an opening to cross and commit terror attacks on Israelis.

The bloody riots made Monday the deadliest single day in the Israeli–Palestinian conflict since the 2014 war between Hamas and Israel. The heightened violence corresponded with the christening of the new U.S. embassy in Jerusalem on Monday, which enraged Palestinians who view the eastern part of the city as a future capital.

“The Hamas leadership is a group of cannibals that treats their children as weapons. They have rockets, sidearms, and a different kind of weapon: women and children,” Israeli Defense Minister Avigdor Liberman said on Wednesday. “Their goal is to lift Gaza’s blockade but not to build their economy or hold talks about coexistence, but rather to smuggle weapons (into Gaza) to continue to build up their military force and create a pseudo Hezbollah model.”

In Case You Missed It:  Ohio judge orders man, 21, to Death By Vaccine for Minor Offense
Posted in Terrorism and tagged Gaza, Hamas, Jihadists, Palestine, Terrorism.

Perhaps because they never were on board with President Donald Trump’s promise to move the U.S. Embassy from Tel Aviv...