Liberal race-baiting and the progressive worship of the dictatorship of the oppressed, are making America worse 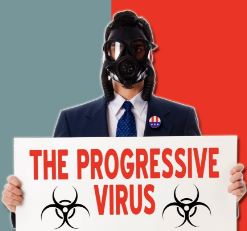 Americans are bored with their abundant lifestyle.  Western civilization is bored with its wealth, bucolic life, and success.  Academics and Hollywood elites have taken it upon themselves to bring all this success and wealth down a few notches if not to the bottom rung of the prosperity ladder.

They’ve had their fun time in the sun, it is now time for the third world to take over and to teach them how to live, work, and worship the right way. Having just one protected class in America was not enough; we brought in Islam with its clean living and fertility to replace the declining birth rate in the west. Western young women and men are not interested in marriage and reproduction, they want to have fun, and, if it means having it in the street or on reality TV, the more the better for the narcissistic society that we have become.

The vice of working endless hours every day is slowly dying down, replaced by apathy and a sense of entitlement to the government’s trough in the European socialist style

Right now the welfare spigot is open and welfare is flowing generously to the rest of the world. Although America is despised by all, they crowd the irrelevant border to cross illegally so they have an opportunity to our generous welfare system, our injudicious immigration laws, and to take over our wealth and our way of life.

Americans used to enjoy working long hours, overtime, bought every amenity imaginable on credit and became slaves to banks, credit cards, the downtrodden, the aging population, and the ersatz disabled. Now they are still slaves to a bloated financial system but have added their liberal children in the basement and the protected illegal immigrant underclass and pretty much any third world tin pot dictatorship that can force its way into the United Nations human rights council and muscle and squeeze more billions out of Satan’s country, the very generous U.S.A where money grows on trees just waiting to be plucked by intrepid illegals with no intention to ever assimilate or to contribute their share to the society they are plundering.

Gadgets that open the window to the world have cast a 24-hour glow on the faces of all generations, beholden to social media. They are stars, they are somebody, they are Internet and Instagram trolls, they can reach the stars with their hidden identities. They are finally somebody, no longer the ignored taxpayer or the bullied public school specimen brainwashed into liberalism and global citizenship utopia.

The vice of working endless hours every day is slowly dying down, replaced by apathy and a sense of entitlement to the government’s trough in the European socialist style. Nobody is asking the obvious question, the elephant in the room, which group of people is going to replenish the abundance trough if everybody adopts a lifestyle of government dependency from cradle to grave?

Materialism has triumphed for decades and opportunity has turned to success, and the rat race has ensued which turned the vast country into a fine-tuned watch; but its components are beginning to age and rust, and materialism has given way to indifference and apathy to anything that could remotely resemble what once used to be “borders, language, and culture.”

Americans have been brainwashed for many decades of academic excellence and liberal experimentation that they don’t have a culture and their history is bad, their men of fame, their inventors and entrepreneurs were bad people.  Inventions that made life easier and saved billions around the globe have suddenly become a danger to the planet and to Mother Nature itself.

The United Nations and the global elites have taken it upon themselves to socially engineer the masses into compliance with their wishes because, as rich as they are, they know for sure what is best for everyone, freedom be damned. They are gods of technology, of banking, of genetically modified agriculture, of pharma, of law, of politics, and are far superior to the dumbed down masses who must obey or be nudged through the power of the law, the courts, and imprisonment.

“Thoughts are free” says an old WWII protest song, Die Gedanken sind frei, but corporate and political elites know that you have an “unconscious bias” and these thoughts you didn’t know existed in your brain must be rooted out with indoctrination classes in the workplace. If they could have, they would have physically extracted your evil and unapproved thoughts with pliars as if they were rotted teeth.  If you want to keep your job, you must think the way elites tell you to think and you must harbor thoughts only approved by progressive guidelines of the new world order.

Half of Americans who vote are ashamed of their country, of who they are, of their history, and of their culture. Teachers are more than happy to indoctrinate your children into their twisted political views.

Unconcerned Americans are at the cross-roads of self-destruction, following in the footsteps of the intrepid Europeans who are busy committing demographic suicide and societal hara-kiri by bringing in non-assimilating masses of economic refugees from Africa and the Middle East at such alarming rates that many beautiful European cities have already been turned into cesspools of violence and destruction.

The triumph of materialism has finally hit a reinforced concrete wall built by progressive agendas and elite billionaires who can afford tall fences, expensive security systems, and armed body guards, in a gated and protected luxurious life that the rest of us cannot afford. We don’t want their wealth, we just want a safe country with well-defined and protected borders.

The West’s ladder of success is sporting dangerously loose rungs and the last few are even missing.  Can it be repaired and salvaged? How many Donald Trumps would be needed to fix it? Are we past the civilization point of no return, headed for a down-sloping road into a furiously bubbling cauldron?

To put it bluntly, no matter how hard President Trump tries to make America economically better for everyone, those afflicted by a serious mental disorder, best described as liberal race-baiting and the progressive worship of the dictatorship of the oppressed, are making America worse.

In Case You Missed It:  The CIA “Continued the Effort to Try to Destroy Trump and They Realized the Only Way They Could Do It Was They Had to Steal the Election” – Former CIA and State Department Employee Larry Johnson
Posted in Tyranny and tagged Democrats, Liberalism, Migrants.

President Donald Trump recently proclaimed June 2018 to be National Ocean Month and stated his support for better utilizing the...