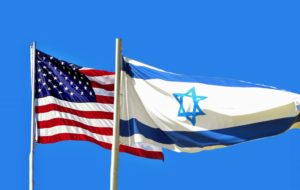 The swamp in the State Department invented a long list of excuses that “forced” President Trump to sign the waver that prevents moving the US embassy permanently to Jerusalem, making the Jerusalem location temporary. Is the State Department’s swamp paving the way for the the next President to move the embassy back to Tel Aviv? It seems everything Trump is doing could be reversed now: His sanctions against Iran can easily be cancelled (the EU is keeping the Iran deal alive waiting for the next US President to re-join)  and the embassy can be moved back to Tel Aviv…
On June 5, 2018 the Jewish Press reported “U.S. President Donald Trump was forced to once again sign a waiver of the 1995 Jerusalem Embassy Act despite having successfully transferred the Embassy from Tel Aviv to Jerusalem last month. The reason: not all requirements under the Act have yet been met…Trump kept his campaign promise to move the embassy to Israel’s capital, but legally had to sign the waiver due to the laundry list of things remaining to be completed under the Act. A major requirement is the official residence of the U.S. Ambassador to Israel must be located in Jerusalem…The current embassy in Jerusalem is considered a temporary facility until a permanent one can be built.”
http://www.jewishpress.com/news/breaking-news/trump-signs-jerusalem-embassy-waiver-despite-move-from-tel-aviv/2018/06/06/
In Case You Missed It:  Boeing employees planning #FreedomFlu sickout Fridays in response to covid "vaccine" mandate
Posted in Freedoms.

Having enjoyed my 82nd birthday, I am part of a group of about 50 million Americans who are 65 years...