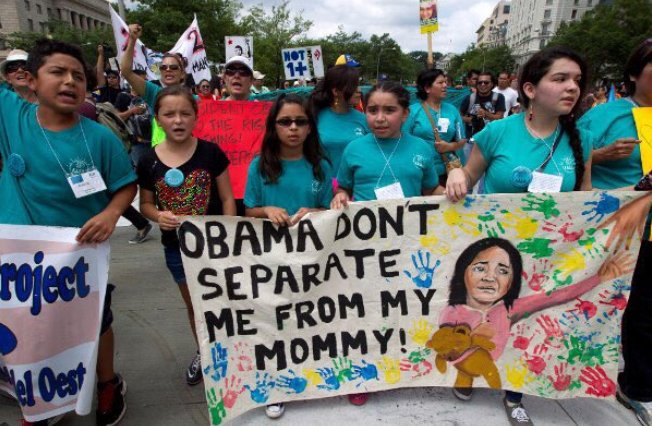 When someone commits a crime, say they rob a bank or or burglarize a home if caught that are arrested and put in a jail, if they have children alone at home they will be separated from those children. If there are no adults around to supervise  them while the law breaker is in jail they are taken by child protection services this is how the system works for everyone. Illegal Aliens whom break the laws are not excluded from the system, or US laws.

The best way to not be separated from your children is to not break the laws of the US to begin with, migrants can go to the nearest US embassy in their home country and apply for asylum in a legal manner. Through the legal process not only will they not be separated, this also created equality in the immigration system as all immigrants go through the same process, no more “line cutters”.

Now About Those Children…

In March 1993, the U.S. Supreme Court issued a ruling in Flores vs Reno. The Court decided that minors couldn’t be incarcerated with adults accompanying them illegally across the U.S. border. The decision was the result of a long dispute in how to best care for these children while the adults were detained for criminal proceedings.

When aliens cross the border illegally – that is, not at a point of entry and an illegal act by long US laws, not something Trump recently made up.

When caught doing this illegal act, they are incarcerated until their criminal case is decided. The understandable argument at the time was “why should children be incarcerated while their parents are in jail?” It seemed a fundamental violation of international human rights.

As a result, The Flores case drew a line in the sand. Children could not be incarcerated with their parents or accompanying adults while being held for illegal immigration violations. And a subsequent 1997 agreement stipulated that children must be placed in a safer environment where they could enjoy *certain privileges, including education, a clean, safe environment and other normal life cycle amenities that incarcerated individuals do not enjoy.* It was considered a “victory” for human rights.

By separating adult and child, we protected the children, reducing any harm done to them for their parent’s or accompanying adult’s decisions. A lot has happened since then. Bottom line, these shelters have been operating in accordance with the law and are overseen by the Department of Health and Human Services to protect those children from the hazards of parental incarceration since 1997.

In a separate development, in 2008 the Democrat-controlled Congress approved bipartisan legislation to combat human trafficking and President George W. Bush, a Republican, signed it into law.

Section 235 (g) in that law, the William Wilberforce Trafficking Victims Protection Reauthorization Act, states that unaccompanied minors entering the United States must be transferred to the custody of the Department of Health and Human Services Office of Refugee Resettlement rather than to the Department of Homeland Security.

Everyone, including liberals, have known that this has been a practice for a long time. The issue here is that the new zero tolerance policy is making this a more common process. Which is causing overcrowding and worsening conditions for the children.

Democrats must not really care about the children, they were silent when the same thing was happening under Obama,  why did they not speak up then?  Are the children just pawns for their political agenda?

Democrats just this week shared pictures of child migrants sleeping in cages to attack what they call are Trumps immigration policies, only to backtrack after realizing the photos were taken during the Obama administration.

Democrats mistakenly tweet 2014 pictures from Obama’s term showing children from the Border in steel cages. They thought it was recent pictures in order to make us look bad, but backfires. Dems must agree to Wall and new Border Protection for good of country…Bipartisan Bill!

Anti-Trump liberals shared the photo included activists, journalists and former Obama speechwriter Jon Favreau, who said: “This is happening right now, and the only debate that matters is how we force our government to get these kids back to their families as fast as humanly possible.”

However, that photo and other related images were published by The Arizona Republic in 2014, deep into Obama’s second term. Favreau later deleted the tweet, as did others who had used the pictures to blast the Trump administration.

On Tuesday, Trump also called for a “bipartisan bill” that would include funding for the wall at the southern border and “new Border Protection for good of country.”

It echoes a tweet Trump sent on Saturday where he called for Democrats to “end the horrible law that separated children from [their] parents once they cross the Border into the U.S.” and included demands for stricter immigration laws

For several decades, a few black scholars have been suggesting that the vision held by many black Americans is entirely...