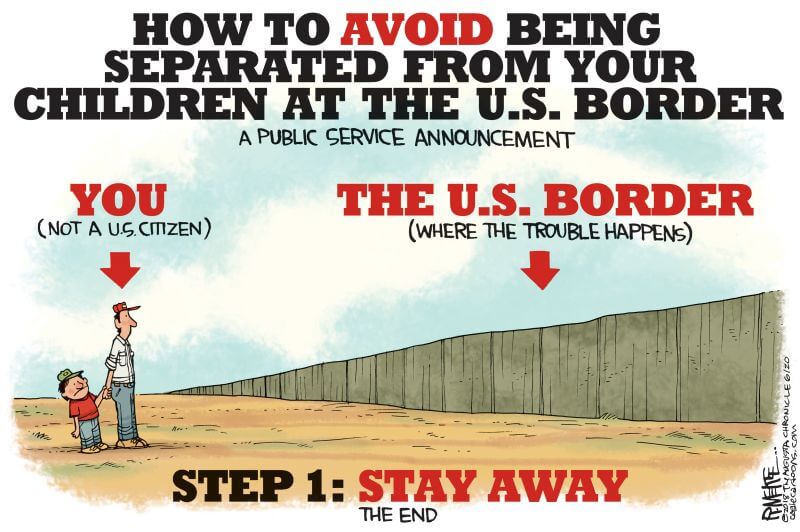 ( Ramussen)  According to the latest polling done by Ramussen research their polling found that most voters blame the parents of the separated children at the border for the latest illegal immigration crisis, not the federal government.

When families are arrested and separated after attempting to enter the United States illegally, 54% of Likely U.S. Voters say the parents are more to blame for breaking the law. The latest Rasmussen Reports national telephone and online survey finds that only 35% believe the federal government is more to blame for enforcing the law. Eleven percent (11%) are not sure. (To see survey question wording, click here.)

To help understand the current political debate over the children issue, a closer look shows that 82% of Republicans and 56% of voters not affiliated with either major political party feel the parents are more to blame for breaking the law. But 60% of Democrats say the government is more to blame for enforcing the law.

Seventy-five percent (75%) of Democrats think the Trump administration is too aggressive in trying to stop the flow of illegal immigrants into the United States, a view shared by only 23% of Republicans and a plurality (46%) of unaffiliated voters.

Fifty-four percent (54%) agree with President Trump when he says, “The United States will not be a migrant camp. And it will not be a refugee-holding facility – it won’t be.” Thirty percent (30%) disagree, while 16% are undecided.

The survey of 1,000 Likely Voters was conducted on June 19-20, 2018 by Rasmussen Reports. The margin of sampling error is +/- 3 percentage points with a 95% level of confidence. Field work for all Rasmussen Reports surveys is conducted by Pulse Opinion Research, LLC. See methodology.

Forty-four percent (44%) of voters said in April that Trump is doing a good or excellent job handling issues related to immigration. This is higher approval than President Obama earned on this issue at any point during his time in office.

Men and those 40 and over are more likely than women and younger voters to blame the parents when families are separated after attempting to enter the United States illegally. Most whites and other minority voters agree, while blacks are closely divided.

Women, voters under 40 and black voters are also the most likely to think the Trump administration is too aggressive when it comes to trying to stop the flow of illegal immigrants into this country.

Just 22% of voters who blame the parents more for the children crisis think the Trump administration is too aggressive in trying to stop illegal immigration. Among those who blame the government more, 87% feel that way.

Just over half (52%) of all voters favor the immigration reform plan detailed by Trump in his State of the Union speech that would create a pathway to citizenship for those brought to this country illegally when they were children, build a wall on the Mexican border and change legal immigration to a more merit-based system.

Only 37% say they want to live in a sanctuary community that protects illegal immigrants from federal immigration authorities.

In mid-March, prior to the current children crisis, 51% said creating a pathway to citizenship for those brought to the country illegally when they were children should be done first. Twenty-four percent (24%) said we should first build a wall on the Mexican border to stop further illegal immigration, while 19% thought they should both be done at the same time.

Voters here are strongly critical of Mexico’s efforts to keep illegal drugs and illegal immigrants out of the United States, and just over half agree with the president that the North American Free Trade Agreement (NAFTA) is a good weapon to use to make our southern neighbor clean up its act.

Additional information from this survey and a full demographic breakdown are available to Platinum Members only.

In Case You Missed It:  How one brave nurse exposed the gender mutilation of children taking place at Tavistock
Posted in Freedoms and tagged Border, Crime, Illegal Immigration, Polls.

Corrupt FBI and DOJ Activity Connects to the Obama Administration

JW Director of Investigations and Research Chris Farrell appeared on “Lou Dobbs Tonight” on the Fox Business Network to discuss...