Very bad timing for Angela Merkel over the migrants crises and terrorism dividing her own party just days before a summit on migration, an explosion rocks apartment building in Wuppertal, Germany. Something that never happened just a few years ago, today Islamic terrorism is becoming all to common in Germany.

Merkel was confronted with an open rebellion by her Interior Minister Horst Seehofer, long a fierce critic of her liberal stance on refugees who wants to toughen border controls and limit the amount of terrorist attacks in Germany.

Today Twenty-five people were injured, four of them severely, when an explosion destroyed an apartment building in the western German city of Wuppertal, police said Sunday.

Police said the explosion rocked the multi-storey building shortly before midnight Saturday with a large bang, scaring people in surrounding homes so much they ran out into the street in a panic. The detonation was so severe it destroyed the building’s attic and the top three floors, the German news agency dpa reported.

Fire then broke out in several different parts of the apartment building and firefighters had trouble dousing the flames because parts of the building kept collapsing. They were able to rescue four severely injured from inside the building and sent them to the hospital. Another 21 people were slightly injured and treated by emergency staff at the scene. 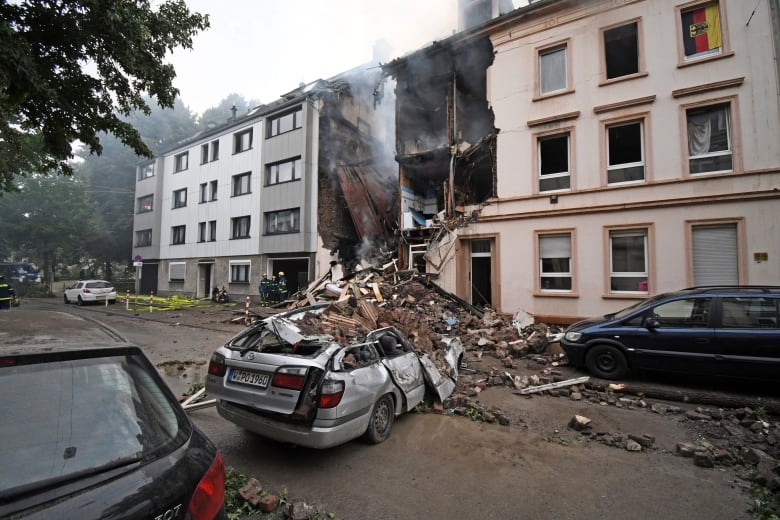 Police said Sunday they were still trying to get the fire under control and were investigating the cause of the explosion. They would not comment when asked if the explosion could possibly be terror-related.

A car nearby was destroyed, buried under window frames that were blown onto it by the impact of the explosion. Emergency personnel on Sunday picked up bricks and furniture on the street from the explosion. 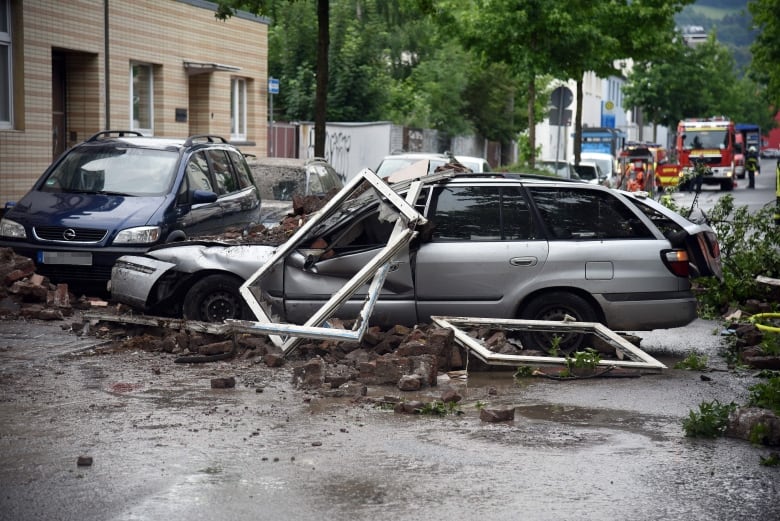 Some of the building’s roof beams stood black and eerie in the smoke as police scoured accessible parts of the building for further people trapped inside before giving the all-clear.

The place where the building stood is now a huge gap in a row of apartment buildings in the city’s Langerfeld neighbourhood.

Authorities brought in heavy equipment to tear down the remains of the ruin. They said it was too dangerous for investigators to search for evidence that might reveal the explosion’s cause because the destroyed building could collapse at any time.

Wuppertal, Germany has had some recent issues with is Muslim population.  The city of 350,000 had a recent brush with terrorism, which was resolved rather favorably for the terrorists. Perhaps they, or another group, was encouraged by the leniency they were shown. Could this have been a terrorist preparing a bomb?

“In July, 2014, three “Germans” really of Palestinian descent tried to burn down the Wuppertal synagogue with molotov cocktails. A year later, a court found them guilty of attempted arson, but decided the crime was not motivated by anti-Semitism, and sentenced the men to 200 hours of community service. The court said the three men wanted to draw “attention to the Gaza conflict” with Israel.

The constant threat of incidents like this in Merkel’s Germany is doing wonders for the German tourism industry and the citizens of Germany are not only getting scared but they have had enough of this migration and terrorism.

On This Day…Jun 24, 2009: In Schweinfurt, Germany A teen girl was stabbed to death by her Muslim father for choosing a Western lifestyle.

In Case You Missed It:  9-11-2001 NEVER FORGET
Posted in Terrorism and tagged Germany, Terrorism.

Ten Mercenaries who have had enough of Islamic terrorism have been arrested by  police in France over an alleged plot...