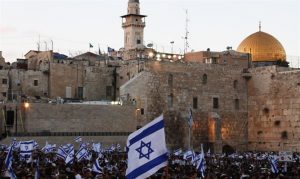 On June 21, 2018 Raphael Ahren wrote in the Times of Israel “The British ambassador to Israel on Thursday defended describing Jerusalem’s Old City as being part of the “Occupied Palestinian Territories” in the itinerary for Prince William’s upcoming visit to Israel and the West Bank.

This is a lie: According to the Oslo II Accords signed in 1995 between Israel and the Palestinian Authority (and brokered by the Quartet of which Britain was a member)the West Bank is not “occupied Palestinian territory”.

Area A – under full civil and security control by the Palestinian Authority): about 3% of the West Bank

Area B – under Palestinian civil control and joint Israeli-Palestinian security control: about 22% of the West Bank

Area C – under full Israeli civil and security control: initially about 72–74% of the West Bank

Calling the West Bank and Jerusalem’s Old City “Occupied Palestinian Territories” is not “consistent with years of practice by Birtish Governments” as Ambassador Quarrey said. According to the Oslo II Accords “Neither side shall initiate or take any step that will change the status of the West Bank and the Gaza Strip pending the outcome of the permanent status negotiations.”

According to the Oslo Accords The territories are not “Occupied Palestinian Territories”, they are disputed territories which outcome would be decided as outcome of permanent status negotiations.

The reason for Britain’s anti-Israel bias is explained by Toby Green in his book “Blair, Labor and Palestine: Conflicting views on Middle east Peace after 9/11” “Britain’s imperial history in the region left an important institutional legacy in the Foreign Office…Britain maintained very close relations with Gulf Arab rulers, and there remained large number of diplomats learning Arabic and spending much of their carers in one of Britain’s 22 missions to Arab States. By contrast there are relatively few diplomats with experience of Israel. Given the importance of contacts in the Arab World, a posting in Israel was for many years regarded as an unhelpful career move for a British diplomat…”

In 2002, after a disagreement over a meeting with Yassir Arafat, Israeli Prime Minister Ariel Sharon told British Prime Minister Tony Blair’s envoy Lord Levy “the British Mandate is now finished”,  Netanyahu should learn from Sharon and respond the same way to those who want to take Jerusalem’s Old City from the Jews. During the Jordanian occupation (supported by the UK), Jews were not allowed to pray at Jerusalem’s Western Wall. Now, thank G-d, the Jews can pray there, and Netanyahu must tell the British it will continue that way.

Boycotts against Israel are not new. In the past Israel suffered arms embargoes, a ban on the sale of North Sea Oil, and Arab boycotts on British and European firms doing business in Israel. Israel endured those embargoes yet it never gave up on its sovereignty over Jerusalem.

To further understand Britain’s anti-Israel bias it is important to consider how the British invented the Arab Kingdom of Jordan. British General James Lunt, a former commander in the Jordanian Arab Legion, related in his biography of Glubb Pasha “Britain had infuriated the Zionists by separating Transjordan from Palestine, which had in turn, delighted the Arabs of course.” (Glubb Pasha, James Lunt, Harvill Press 1984, page 62).

In 1916, before WWI ended, the British and the French signed the secret Sikes-Pikot agreement defining their proposedspheres of influence in the Middle East if they won the war. According to the agreement, France was allocated to Northern Iraq, Syria and Lebanon, while the British would rule over Palestine and southern Iraq.

In 1920, following the provision of the Mandate to France and Britain at San Remo, the UK took control of British Mandate Palestine (Mandatory Palestine) in what is today Israel and Jordan, land captured from the Ottoman Empire.

The McMahon-Hussein correspondence (1915) reveals details of a secret deal between Sir Henry McMahon, High Commissioner of the UK in Egypt, and the Sharif of Mecca, Hussain Bin Ali, by which the British would give control of lands captured from the Ottoman Empire to the Arabs (Palestine was included within the boundaries that were proposed by Hussein) if the Arabs assisted the British in fighting the Turks during WWI.

In 1921 the UK created the Emirate of Transjordan (Jordan) in the land of Mandatory Palestine east of the Jordan River and appointed Abdullah, son of the Shariff of Mecca, as King of Jordan. Britain also appointed Abdullah’s brother Faisal as King of Iraq. Jordan was officially under British Mandate Palestine and obtained independence in 1946.

In 1948 British General Glubb Pasha lead the Jordanian Arab Legion to expel all the Jews from Hebron, East Jerusalem and the West Bank. Not only they did ethnic cleansing but they destroyed dozens of ancient synagogues and thousands of Ancient Jewish Tombstones in the Sacred Ancient Jewish Cemetery of Mount of Olives to try to erase all evidence of Jewish History.

Britain was the only country to recognize Jordanian (not Palestinian) sovereignty over Jerusalem’s Old City while it was under Jordanian occupation between 1948-67, this is not surprising considering Jordan was a puppet Kingdom of the UK and Jordan’s King Abdullah was honorary Air Commodore in Britain’s Royal Air Force (1940).

Until 1948 Jews were a majority of the population in Jerusalem. On December 11, 2017 Amb. Dore Gold wrote in the Jerusalem Center of Public Affairs “By the mid-19th century, the British Consulate in Jerusalem made the following determination, according to this report, which I found in the Public Record Office in Kew, it states that Jews were a majority in Jerusalem, when? already in 1863 – that’s long before Theodor Herzl, before the Britt’s arrived, or Lord Balfour.

See the guy on the right, William Seward, he was Secretary of State of the United States during the American civil war, under President Abraham Lincoln.

When Seward’s term ended, he visited the holy land, he visited Jerusalem. And he wrote a memoir. And in his memoir, it is written, “There is a Jewish majority in Jerusalem.”

The Origins of the Name “Palestine”

British claims that Jerusalem belongs to the Arabs are wrong also if one considers that while there is only one Jewish State smaller than New Jersey with a population of about 7 million Jews, Islam has expanded from Saudi Arabia to the 57 countries member states of the Organization for for Islamic Cooperation with an estimated population of 1.6 billion Muslims. Jerusalem has always been the only spiritual capital of Judaism, the spiritual capital of Islam is Mecca in Saudi Arabia. Jews face Jerusalem when they pray, the Arabs face Mecca.
The Palestinians already have a State in Jordan, the Palestinians and Jordanians are one people. On November 24, 2017 Petra, the officialJordanian news agency reported that “Palestinian President Mahmoud Abbas, on Friday said that Jordanians and Palestinians are “one people living in two states”, appreciating His Majesty King Abdullah II, who spared no occasion to defend the Palestinian cause and Jerusalem before the world. The Palestinian leader’s remarks came as he received Amman Mayor, Yousef Shawarbeh, in Ramallah, in the presence of Jordan’s ambassador in Palestine Khaled Shawabkeh…”

As Abbas admits the Palestinians and the Jordanians are one people, the Palestinians already have a State in Jordan. Since the UN claims the Arab-Israeli conflict can be solved though a UNSC resolution why not submit one declaring that Jordan is Palestine? America has existed for 240 years. The Ottoman Empire Occupied the Jewish Homeland for more than 320 years, from the early 1500s until 1922, a period longer than America has existed. The settlements are not illegal: Israel has as much claim to Ottoman land as Jordan. The land was part of the Ottoman Empire before WW1. Israel and Jordan were both created from Ottoman land. If there is a UNSC resolution demanding Israel to return Ottoman Land why there is no UNSC demanding Jordan to return Ottoman land ?

Why exclude Jordan from the Israeli-Palestinian negotiations? Jordan was created in British Mandate Palestine. Most of the Jordanian population is Palestinian, the previous King said “Jordan is Palestine, Palestine is Jordan”. The Queen of Jordan Rania Al-Yassin was born in Kuwait to Palestinian parents Faisal Sedki Al Yassin and Ilham Yassin from Tulkarm, Jordan has a Palestinian Queen, the next King of Jordan will be the son of a Palestinian. If Jordan is recognized as the Palestinian State the Arabs currently living in Israel can continue but they will be Jordanian Citizens. Jordan was also part of British Mandate Palestine, it must also be part of the solution.

Very bad timing for Angela Merkel over the migrants crises and terrorism dividing her own party just days before a...