Obama is to blame for Abbas’ refusal to negotiate with Israel: UNSC 2334 already gave the Palestinians all they wanted, their strategy is now to avoid negotiations and impose a solution in the International Criminal Court 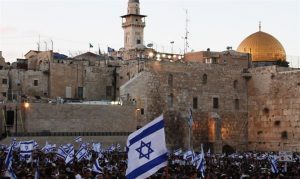 On January 24, 2018 Ben Caspit wrote in Maariv “Maariv reported that former US secretary of state John Kerry met in London with a close associate of PA President Mahmoud Abbas, Hussein Agha, for a long and open conversation…Kerry asked Agha to convey a message to Abbas and ask him to “hold on and be strong.” Tell him, he told Agha, “that he should stay strong in his spirit and play for time, that he will not break and will not yield to President [Donald] Trump’s demands…According to Kerry, Trump will not remain in office for a long time…”

On June 21, 2018 Yoni Ben Menachem wrote in the Jerusalem Center for Public Affairs “…PA Chairman Mahmoud Abbas is continuing to boycott the Trump administration since its declaration that Jerusalem is the capital of Israel. He also continues to rail against the administration and to “reveal” the details of “the deal of the century” plan even though he has never seen any of its details.

Abbas is afraid of possible betrayal by the Arab leaders over the Palestinian problem because, for them, the Iranian danger takes priority.

Therefore, the senior officials of the Palestinian Authority make sure to issue regular reminders through the media that not only is the PA chairman opposed to “the deal of the century,” but so are all of the leaders of the Arab countries.

Nabil Shaath, Mahmoud Abbas’ adviser for international affairs, told the Al-Hayatnewspaper on June 17, 2018, that the Palestinians relied on the resistance of the Arab leaders to “the deal of the century”…”

The Gaza Strip and “the Deal of the Century”

In 1995 when Rabin was campaigning for the Knesset to approve the Oslo Accords he gave a speech in the Knesset in which he promised that “…The borders of the State of Israel, during the permanent solution, will be beyond the lines which existed before the Six Day War. We will not return to the 4 June 1967 lines.

And these are the main changes, not all of them, which we envision and want in the permanent solution:

A. First and foremost, united Jerusalem, which will include both Ma’ale Adumim and Givat Ze’ev — as the capital of Israel, under Israeli sovereignty, while preserving the rights of the members of the other faiths, Christianity and Islam, to freedom of access and freedom of worship in their holy places, according to the customs of their faiths.

B. The security border of the State of Israel will be located in the Jordan Valley, in the broadest meaning of that term.

C. Changes which will include the addition of Gush Etzion, Efrat, Beitar and other communities, most of which are in the area east of what was the “Green Line,” prior to the Six Day War.

D. The establishment of blocs of settlements in Judea and Samaria, like the one in Gush Katif.”

…Neither side shall initiate or take any step that will change the status of the West Bank and the Gaza Strip pending the outcome of the permanent solution negotiations.”

…The responsibility for external security along the borders with Egypt and Jordan, as well as control over the airspace above all of the territories and Gaza Strip maritime zone, remains in our hands…

The agreement, with all its articles lies before you. There are no secret appendices or letters. This is the agreement that dozens, perhaps hundreds, of civil servants, and IDF officers led by Foreign Minister Shimon Peres worked on, and to all of them I say — thank you from the bottom of my heart…”

…Under the resolution, he said, Jerusalem’s Jewish Quarter and the Western Wall would be considered “occupied territory,” which he termed “absurd.”

United with Israel reported “The Simon Wiesenthal Center, which dedicates itself to combating post-Holocaust anti-Semitism, has presented its list of the top 10 worst anti-Semitic and anti-Israel incidents that occurred over the course of 2016.

…The most stunning 2016 United Nations (UN) attack on Israel was facilitated by US President Obama when the US abstained on a UN Security Council resolution condemning Israel for construction in Judea and Samaria. It reversed decades-long US policy of vetoing such diplomatic moves against the Jewish State.

In 2011, a similar resolution was vetoed by US Ambassador Susan Rice “This draft resolution risks hardening the positions of both sides. It could encourage the parties to stay out of negotiations”, she had said. That same year, President Obama told the UN General Assembly that peace would “not [come] through statements and resolutions at the UN”

The resolution, in effect, identifies Jerusalem’s holiest sites, including the Temple Mount and the Western Wall, as “occupied Palestinian territory.” It also urges UN members “to distinguish, in their relevant dealings, between the territory of the State of Israel and the territories occupied since 1967,” effectively endorsing BDS.

US Congressman Alcee L. Hastings (D-FL) echoed the sentiments of many Democrats and Republicans, labeling the resolution “destructive and irresponsible” and as seeking “to isolate and delegitimize Israel…US actions were completely unacceptable and reckless…”

The Top 10 Global Anti-Semitic Incidents of 2016

By enabling the anti-Israel UNSC resolution Obama ruled that the Jewish Quarter, Temple Mount and the Western Wall are “occupied Palestinian territory”, the Wiesenthal Center declared UNSC 2334 the worst anti-Semitic incident in 2016.

In his autobiography “My Life” Bill Clinton describes a conversation he had with Arafat when he was hosting a Palestinian-Israeli summit in Camp David in 2000: “…When Arafat came to see me, he asked a lot of questions about my proposal. He wanted Israel to have the Wailing Wall, because of its religious significance, but asserted that the remaining fifty feet of the Western Wall should go to the Palestinians. I told him he was wrong, that Israel should have the entire wall to protect itself from someone using one entrance of the tunnel that ran beneath the wall from damaging the remains of the temples beneath the Haram. The Old City has four quarters: Jewish, Muslim Christian, and Armenian. It was assumed that Palestine would get the Muslim and Christian quarters, with Israel getting the other two. Arafat argued that he should have a few blocks of the Armenian quarter because of the Christian churches there. I couldn’t believe he was talking to me about this….I said these parameters were nonnegotiable and were the best I could do…Arafat’s rejection of my proposal after Barak accepted it was an error of historic proportions…”

Isaac Rabin (Oslo Accords) and Bill Clinton did not consider settlements to be illegal and did not require that Israel return all the land beyond the lines which existed before the Six Day War. Rabin said “We will not return to the 4 June 1967 lines.” Clinton said “I recommended 94 to 96 percent of the West Bank for the Palestinians…an understanding that the land kept by Israel would include 80 percent of the settlers in blocs…”

Obama’s claim that UNSC 2334 was necessary because of settlement growth is false given that the total land occupied by settlements is 1.7% of the West Bank, about the same it was when the Oslo agreements were signed.

Obama’s UNSC 2334 rules that “the establishment by Israel of settlements in the Palestinian territory occupied since 1967, including East Jerusalem, has no legal validity and constitutes a flagrant violation under international law”. UNSC 2334 “calls for affirmative steps to be taken immediately to reverse the negative trends on the ground”.

Obama contradicted the positions of both Rabin (Oslo Accords) and Clinton. By calling for the “reversal” of settlements Obama’s UNSC 2334 calls for the ethnic cleansing of over 800,000 Jews that reside (in settlement blocks and in East Jerusalem) over the 1949 Armstice Lines (green line).

Obama killed the peace negotiations by giving the Palestinians all they wanted through UNSC 2334. Why would they care to negotiate?

Before UNSC 2334 the West Bank was disputed territory, after UNSC 2334 the West Bank is “occupied Palestinian territory”. UNSC 2334 divides Jerusalem and gives all the holy sites to the Arabs. There will be no final status agreement. Obama ended the peace process by allowing UNSC 2334 to pass giving all the holy sites to the Arabs and none to the Jews. The Palestinians already have a UNSC resolution that gives them all they want, they don’t need to negotiate anymore that is the reason why they refuse to meet with Netanyahu. The Palestinians will now go to the ICC or the UNSC and criminalize Israeli officials, impose sanctions on Israel until Israel withdraws from what they call “occupied Palestinian land”.

On December 26, 2016 the Times of Israel reported “prominent Palestinian journalist and confidant of PA President Mahmoud Abbas said Sunday the Palestinians were collecting the names and photographs of “hundreds” of Israel Defense Forces soldiers, with the intention of bringing them to the International Criminal Court in 2017.

“In 2017, we are going to The Hague,” said Nasser Laham, according to Channel 2. “We have hundreds of pages of names of IDF officers. Every pilot and every officer and every soldier — we have his photo, we have his name, and we are waiting for him at The Hague.”

“I told my people in a live broadcast — in suits and ties we will take the Israelis to The Hague, we will handcuff them,” he said.

Obama ended the Peace Process and turned it into a judicial process in which Israeli officials will become international criminals and Israel will be sanctioned if it does not agree to ethnically cleanse hundreds of thousands of Jews from Judea and Samaria and surrender Jerusalem’s Western Wall, something even Clinton had said was nonnegotiable.

In Case You Missed It:  TV station looking for stories of unvaccinated fatalities gets flooded with reports of vaccine injuries
Posted in Freedoms.

The Supreme Court ruled 5-4 Wednesday that nonunion government workers can’t be forced to pay dues or other fees to...