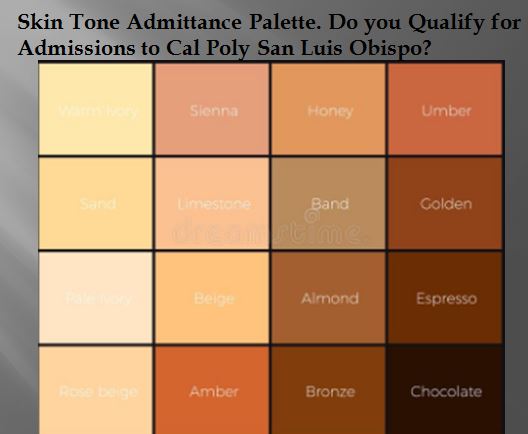 No this is not Nazi Germany in 1938 excluding a group of people, its 2018 in California as fascist leftist Cal Poly San Luis Obispo works on a massive exclusion program.

What the leftist call keeping with the diversity and inclusion movement sweeping campuses across the country, Cal Poly San Luis Obispo recently released a 30-page report outlining plans to “improve diversity” via a series of racist initiatives using skin color.

Their goal is to increase the number of people of color on campus and increase who they choose to admit based on their skin tones.

The fascist administration details a multi-year effort with dozens of racist initiatives, including ones to further lower the percentage of white students on campus as well as decrease the number of faculty that are white.

For students, the school plans on recruiting applicants more heavily based on their skin tone, darker tones are preferred by these leftist. For instance, the school has recently implemented several new scholarships that are  exclusive to African-Americans, whites need not apply.

The university has received $150,000 from the Cal State University system for a cluster hire of up to 10 faculty positions that focus on hiring people of the approved skin tones.

This fall campus leaders will require a diversity statement from candidates for all faculty and staff searches, the report states.

For instance, the document calls for the implementation of a “pre-enrollment diversity training for new first-year and transfer students.” This “diversity training” will be in addition to the two mandatory orientation programs — “SLO Days” and “Weeks of Welcome.”

Hopefully the U.S. Supreme Court will soon strike down affirmative action and ALL university actions based on race/ethnicity; this will finally require Calif state schools to adopt policies that are non-discriminatory.

We debated naming this article…. “Why Trump Won, and Why The Democrat Party Has No Future.”

President Donald Trump nominated Judge Brett Kavanaugh to the Supreme Court in a prime-time announcement Monday night. If confirmed by...