What kind of lawyer would tape a client?” The answer is as plain as the nose on Robert Mueller III’s face: One that was working for Hillary Clinton, and likely still IS, Mr. President! 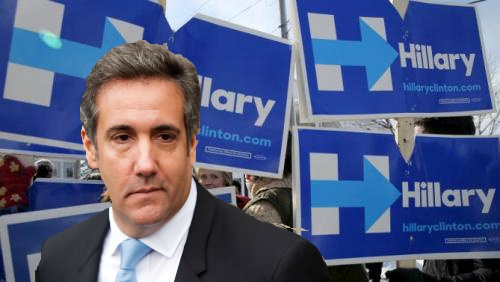 Before Michael Cohen became the latest, snivelling, turncoat cut-throat star of CNN, he was Donald Trump’s “pit bull”,  New York-nicknamed “Tom”,  a reference to Tom Hagen, the consigliere to Vita Corleone in the ‘Godfather’ movies.

“I do everything in my power to resolve it to Mr. Trump’s benefit,” Cohen said in an interview with ABC News.  “If you do something wrong, I’m going to come at you, grab you by the neck and I’m not going to let you go until I’m finished.” (ABC, April 16, 2011)

Truth is that even as far back as 2011, Cohen was Hillary Clinton’s biggest asset.

Back then, Cohen, who doubled as Donald Trump’s pre-presidential election political advisor, was still a registered Democrat, who voted for Obama in 2008.

Now that CNN is masquerading Cohen as a hapless victim, he is painted as a victim of attacks by Trump, Rudy Giuliani and their allies.

All innocence with no references on CNN that he started the ball rolling by selling out his own client when the time was right.

In his recent CNN interview, Cohen’s lawyer Lanny Davis said his client is ready “to turn a new corner” and tell the truth about what transpired between himself and the president.

Then why did it take seven years for Cohen to tell the truth and only a few hours for CNN to run with a largely unintelligible audio tape between Cohen and his client Donald Trump?

Lanny Davis on Trump-Cohen audio: “The truth is on our side”.

“Michael Cohen’s lawyer Lanny Davis on Tuesday insisted “the truth is on our side” after releasing audio of a conversation between President Trump and Cohen about a payment tied to a former Playboy model alleging an affair with Trump. (The Hill, July 24, 2018)

“Davis appeared on CNN to discuss the tape, which confirms earlier reports that Trump and Cohen talked about buying the rights to the story of Karen McDougal’s alleged affair with Trump.

“In the recording, Cohen tells Trump that he needs “to open up a company for the transfer of all of that info regarding our friend David,” a likely reference to American Media Inc. head David Pecker.”

Back in 2011, Cohen was setting up Trump as the man who got eligibility back on the Google map, promising to prove Obama was not born in Hawaii, but on foreign soil—a concept that originated from the Hillary Rodham Clinton campaign.

According to ABC News, “Late last year, Cohen co-founded the “draft Trump” website, “Should Trump run?”  and the site has received more than 830,000 hits”.

Cohen asked all so-called ‘birthers’ to send their information directly to him.

Canada Free Press worried at the time about what Cohen would do with the information sent to him.

It was March 23 on The View when Trump talked about Obama’s missing Birth Certificate, paving the way for the MSM and social media to blame him for a controversy unearthed by Hillary Clinton.

No one asked the question, then or now: Who was, and is, Michael Cohen really working for?

What kind of a lawyer would tape a client? So sad! Is this a first, never heard of it before? Why was the tape so abruptly terminated (cut) while I was presumably saying positive things? I hear there are other clients and many reporters that are taped – can this be so? Too bad!

“What kind of lawyer would tape a client?”

The answer is as plain as the nose on Robert Mueller III’s face: One that was working for Hillary Clinton, and likely still IS, Mr. President!

In Case You Missed It:  They're tracking us: In obedience to WHO, international medical classification system adds new diagnosis coding for unvaccinated
Posted in Freedoms and tagged Clinton, CNN.

The Democrats and their minions are out of their mind crazy in anger not because Trump is somehow a danger...