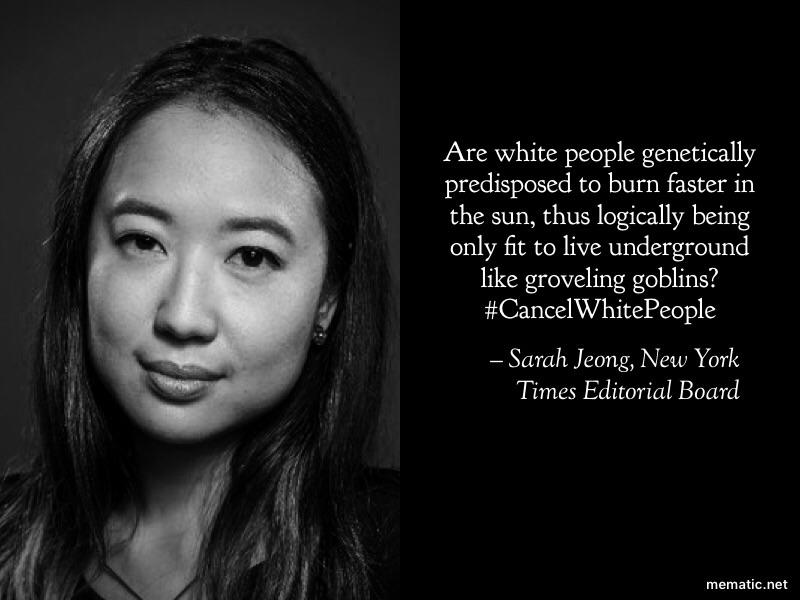 This support for anti-police, anti-male and anti-white hatred speaks volumes about the state of journalism today, especially at newspapers like The New York Times

For years, The New York Times has been “failing,” according to President Donald Trump. Its once sterling reputation as “the newspaper of record” has diminished significantly in recent years. The unadulterated liberalism of the newspaper and changing habits among readers have led to a massive decline in print subscribers and advertisers. While The New York Times has supplanted that revenue with digital subscribers and advertisers, the overall impact of the newspaper has certainly declined.

It is regularly lambasted by President Trump and other conservatives for bias and for good reason. The latest example was revealed this week with the controversial hiring of Sarah Jeong as a member of The New York Times editorial board.

Jeong is a raging racist who has tweeted hundreds of times about her extreme hatred toward white people. In one tweet, she boasted that “it’s kind of sick how much joy I get out of being cruel to old white men.” She also asked on Twitter whether white people are “genetically predisposed to burn faster in the sun, thus logically being only fit to live underground like groveling goblins.”

These samples are only a fraction of the four years of unrelenting hate messages that Jeong spread on social media. She clearly is consumed by her animosity toward white people. In another example, she promoted the hashtag #CancelWhitePeople and celebrated that “White people have stopped breeding,” and will “go extinct soon” because that was her “plan all along.”

After these detestable tweets were exposed, The New York Times refused to fire Jeong and stood by their new editorial board member. In a statement released on Thursday, the newspaper claimed that Jeong was “the subject of frequent online harassment” because she is a “young Asian woman.” Thus, her online revulsion of white people was justified because she was only responding to “that harassment by imitating the rhetoric of her harassers.”

Certainly, this justification is laughable and such extreme consideration would not be extended to a white journalist with a record of tweeting hateful comments toward members of any other race. The newspaper had no qualms about firing technology columnist Quinn Norton when her anti-gay and anti-Black tweets were unearthed. Presumably, in the view of The New York Times, charges of racism are reserved for white people only, especially those who are conservatives.

To make matters worse, Jeong also has a history of tweeting hateful comments about men. In 2014, she tweeted a desire for people to “kill more men.” She said that if only “bad men” were killed that would include all men. 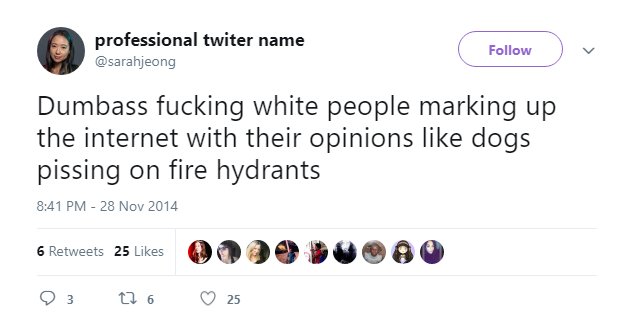 The new Times editorial board member also hates police officers. In one tweet, Jeong claimed that she would “FIGHT THE COPS WITH MY GUNS.” She also recommended that for an ice bucket challenge, people should throw it “not on yourself, but the nearest cop.” In 2014, she asked her followers to “let me know when a cop gets killed by a rock or molotov cocktail or a stray shard of glass from a precious window.” For good measure, she often tweeted, “F** the police” and noted in 2015 that “cops are a**holes.”

Thus, the voluminous online record of Sarah Jeong includes vile posts about men, police officers and white people. Despite these horrific revelations about Jeong’s online history, The New York Times refused to reverse their decision to hire her. The newspaper even admitted that it had reviewed her tweets before officially extending an offer to her.

When actress Roseanne Barr made one unfortunate and racist tweet about a single individual, the entire media world pounced on her and demanded ABC fire her. Of course, within hours, the network complied, and Barr was fired from her popular TV show. Only a few months later, The New York Times seems to have no concern that their new editorial board writer has expressed hatred toward millions of Americans based on their skin color, gender or occupation.

These newspaper executives do not even care that large groups of their readers may be offended by Ms. Jeong. The only thing that matters is strict adherence to liberal and politically correct ideology. Since Jeong is a minority and was supposedly the subject of some online harassment, she has been given much greater latitude in her social media posts.

This support for anti-police, anti-male and anti-white hatred speaks volumes about the state of journalism today, especially at newspapers like The New York Times. It is little wonder why the 63 million Americans who voted for Donald Trump have such contempt for the mainstream news media. Clearly, it is well deserved. 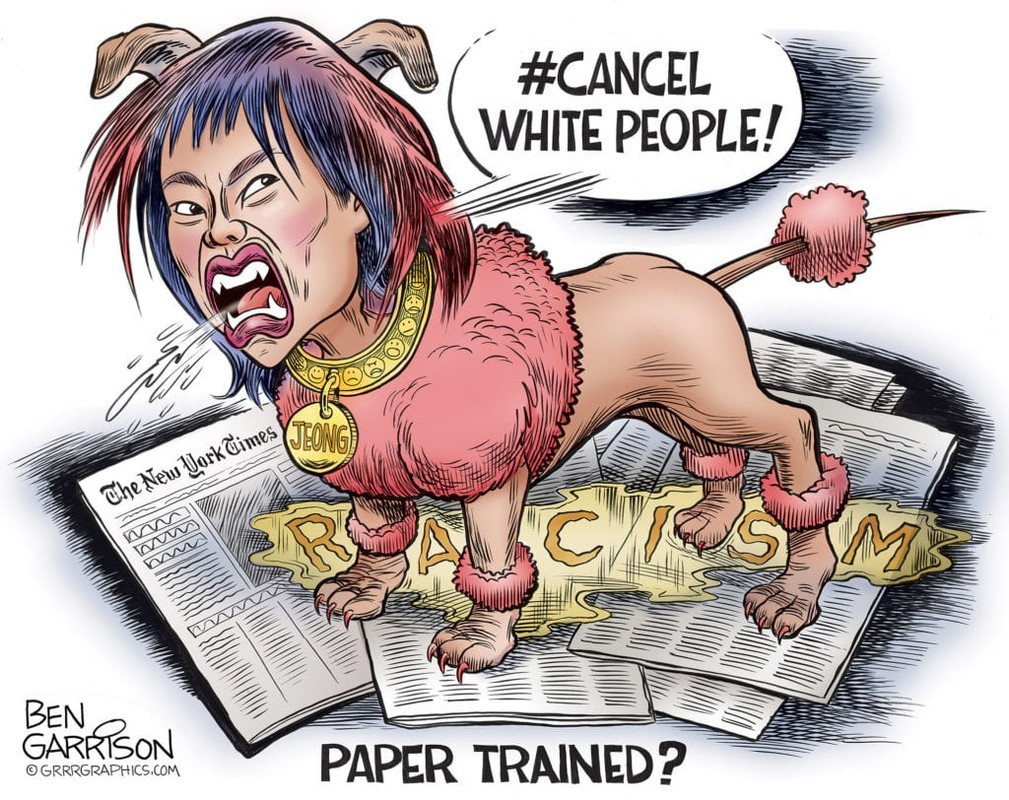 With the Coast Guard celebrating its 103rd birthday on Saturday, Aug. 4, now is a perfect time to honor one...