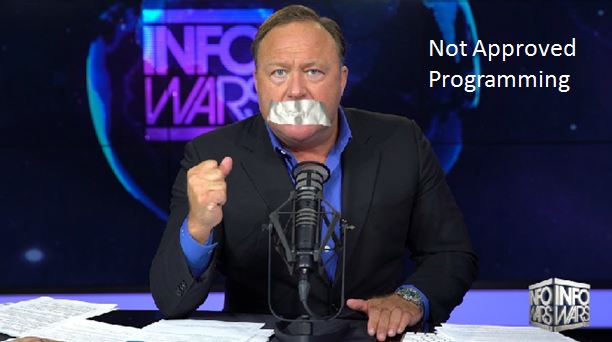 In news that has shocked many people, the popular Alex Jones radio show was shut down and blocked from Facebook, Youtube, and other social media outlets:

The US Constitution explicitly forbids government censorship. So Silicon Valley big-tech companies made themselves the gatekeepers of ‘goodthink,’ de-platforming anyone who runs afoul of their arbitrary ‘community standards.’

Alex Jones, the host of InfoWars, has often been derided by establishment media as a conspiracy theorist. Yet on Monday, Apple, Spotify, YouTube and Facebook proved right the motto of his show – “There’s a war on for your mind!” – by blocking or deleting InfoWars accounts from their platforms, saying he allegedly engaged in “hate speech” and violated their “community standards.”

Simply put, these corporations appointed themselves arbiters of acceptable political thought, and censored Jones for failing to comply with arbitrary political standards set in Silicon Valley boardrooms, not at the ballot box.

The First Amendment to the US Constitution says that Congress shall make no law “abridging the freedom of speech, or of the press.” There is no “hate speech” exemption, either. In fact, hate speech is not even a legal category in the US. However, a chorus of voices all too glad Jones was purged immediately chimed up to argue that Apple, Alphabet, Facebook and Spotify are private companies and this does not apply to them.

There is a wrinkle in that argument, though: civil rights outfits such as the ACLU have argued that social media amount to a “designated public forum” in cases where government officials tried to avail themselves of blocking, muting and other functions put forth by Big Tech as a way to police “toxicity” on their platforms.

This isn’t about how much one likes or dislikes Alex Jones or InfoWars. This is about corporations deciding for you what you should be allowed to hear, read, say or think – and the people normally criticizing such behavior cheering it on, because it suits their political agenda.

Ask not for whom the censorship bell tolls; it tolls for thee. (source)

The Alex Jones news shutdown from social media does appear to be a big deal, and in a certain sense it is. He is a popular radio show host, and to his credit, has made many people think about issues of global politics and the forces which influence the world. He has done some good work, and the good work that he has done should not be ignored.

That said, Alex Jones always was, is, and remains in the future to be a form of controlled opposition. Getting rid of him is no different than saying that the government taking PBS off the television is a threat to the free press because said channel was already controlled by the government.

There are two major events that one can witness to show this. The first is the David Duke vs. Alex Jones debate, which took place on August 18th, 2015 and was deleted from Alex Jones’ official Youtube page before the page was removed permanently by Youtube:

Without getting into the individuals, their views, and the well-known issues associated with both, in this debate Alex Jones is definitively defeated by Dr. Duke. In addition to that, this debate also marks the formal transition of InfoWars from being a site with a focus on conspiracies and talking about “the globalists” to a shift in favor of outright nationalism, “Trumpism,” and “conservative politics.” Its possible that Jones realized that he needed to adapt to the nationalist trend. To those who were or are regular InfoWars listeners, the show was never the same after this debate happened.

The second event, and perhaps the most glaring, was that Alex Jones himself ADMITTED that he comes from a family with deep ties to the CIA. He admitted this on an episode of the Opie and Anthony show on April 17. 2013 (28:15):

And as the obituary for Mr. Hamman’s father, it likewise notes:

Biff was born July 25, 1945 in Dallas, Texas to Clyde William and Bennie Grayce Pope Hamman. He received his Bachelor’s Degree from LSU, while also setting track records. He furthered his education by receiving a PHD in Latin American History from the University of Guatemala. He proudly served in the U. S. Army during the Vietnam War as a helicopter pilot.

Biff married the love of his life, Lilian R. Cowart on December 9, 1970 in Fort Hood, Texas. He was a ham radio operator for many years, K50F0. He was an avid bicyclist and loved the outdoors. Biff managed a hunting lodge, enjoyed making stained glass, tending to beehives and vineyards. He was, presently, Ranch Manager for Jones Brothers Ranch. While he was a busy man, nothing was more important to him than his family and spending time with them.

He was preceded in death by his father and son, Peter Hamman.

If that was not enough, Alex Jones also admitted on August 9th, 2017 while being interviewed by George Noory that he was worked in “counter intel” on behalf of the Trump campaign.

However, the issue of censorship itself is also something that is coming and needs to be discussed because, regardless of who is in power, America with each passing year becomes a more hollowed-out, weaker shell of what she once was in terms of the rights and privileges of the people. It is not simply a conspiracy for power, but the real erosion of freedoms and rights Americans once had or thought they had until the forceful hand of the law was pressed against them.

There are many ways the censorship is being applied and will be applied in the future. One of the major ways that we have warned about at Shoebat.com is through the use of “hate laws,” specifically those about the LGBT. There are already 22 European nations who have passed laws that criminalize the criticism of homosexuality. If such laws are not instituted on a state level, it is but a matter of time before federal law forces states to comply with a like demand, at which point there is not a limit as to what could happen. However, there is the possibility that websites such this one could be pushed off of the “mainstream Internet” in such a purge.

It is unlikely this will happen in the next year. But five years? Or ten years? It is not impossible to consider. Remember that in 1987 when the Gay Manifesto was written, a majority of people in the USA were against same-sex relations. After three decades of propaganda, Americans are now arguing in continually growing numbers for men and women mutilating their genitals and then pretending that they are the other gender. One can hardly imagine what the nation will be advocating for in five to ten years.

Censorship is indeed coming in the future, although the form is yet to be seen. There is a point to be made in so far as the idea of stripping people of their platforms for having “wrongthink” opinions, especially through the usage of “internet ghetto” websites like Facebook and Youtube, that while gathering a large amount of people force them into an intellectual “ghetto” that then uses “regulations” to control what can and cannot be said. But as far as Alex Jones is concerned, he would unlikely need to be concerned, for as the evidence strongly suggests that he is a mere puppet of the same financial, government, military, and industrial organs which are bringing the world to another major war, he will move as he is told to and then, censored or not, will be able to ride away when his time has come and his work in guiding and controlling any opposition to said policies is no longer needed.

In Case You Missed It:  Supreme Court BETRAYS America and authorizes outrageous vaccine mandate for health care workers; does NOTHING to affirm the human right to reject dangerous medical experiments
Posted in Freedoms and tagged Freedom of the Press.

Censorship: How to Shutdown Free Speech

The Left want full control over speech so they can feed the public lies and disinformation without anyone being able...