(Conservativepapers.com) A Muslim man named Qasim Rashid  is a one-man propaganda machine of deception and hypocrisy for Islam. Rashid is churning out article after article purporting to prove that the Muslims who are killing, enslaving, raping and terrorizing people all over the world in the name of Islam are really misinterpreting Islam, perhaps they read it upside down?

He keeps plugging terrorism has no religion, although it does, and the religion is Islam. Out of the list of worldwide terrorist groups the majority are Muslims. These groups do not allow non-Muslims to join, that’s right 100% Muslim groups but yet we are told the same boring “nothing to do with Islam” insanity.

This week Rashid is after Christains, in his tweet: 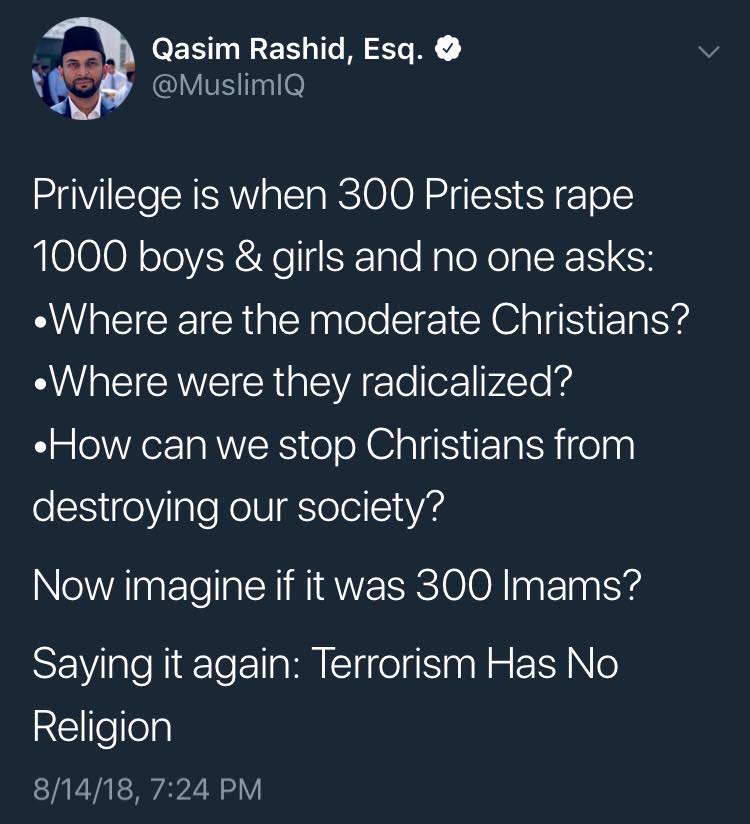 Those who would say the problem is “religion” often lose sight of the fact that pedophiles encroach in all areas of life. They’re in schools. They’re in the medical and dental offices. They’re at the local day camp and the local youth hang out. So while pedophilia is not a religious problem overall, only one region has a pedophile as their prophet, that is Islam.

He asked “where are the moderate Christians”.  What he does not say is in Western countries child rape is not tolerated one bit, the Priests involved will be serving prison time. Inside the Islamic world and Rashid’s  hypocrisy of child abuse in many Muslim countries, that is too often tolerated.

Child marriage and pederasty are tolerated in most Muslim societies, there is a documentary on the Dancing Boys of Afghanistan. It exposed an ancient custom called “bacha bazi” (boy for play), where rich men buy boys as young as 11 from impoverished families for sexual slavery. The boys are dressed in women’s clothes and made to dance and sing at parties, before being carted away by the men for sex. Owning boys is considered a symbol of status and one former warlord boasted of having up to 3,000 boys over a 20-year period, even though he was married, with two sons. The involvement of the police and inaction of the government means this form of child prostitution is widespread.

In the Islamic world young girls who are also considered desirable and men are able to satisfy their lusts legally through child marriages. In Yemen, more than a quarter of girls are married before the age of 15. Cases of girls dying during childbirth are not unusual, and recently, one 12-year-old child bride even died from internal bleeding following sexual intercourse. In another case, a 12-year-old girl was married to an 80-year-old man in Saudi Arabia.

So why is the practice of child marriage sanctioned in Muslim countries?
The issue is Islam founder Mohammad, it is recorded in the Islamic Hadith that the founder (Prophet) Mohammad had a child bride, she was 6 years old, the Islamic prophet was 52. To Muslims this pedophile is considered the most perfect man, the Qu’ran says Mohammad life the perfect model for mankind .
In the Bible Jesus was perfect and never dated or had any wife’s so there is not such bad example for them to follow as there is in Islam.
Now Imagine if this is 300 IMAM’s says Qasim Rashid.
Okay lets imagine,  we find many such stories, to many to mention here much more than 300 IMAMS.  Here are a few examples.
A 2005 story out of Pakistan highlighted the worlds AIDS day conference and the problem of “sodomy in the madrassas.” Dr. Liaquat Husain announced the issue to a room full of people waiting for wisdom to explain why and how the spread of AIDS had become so rampant:

“During a raid on a madrassa in Karachi, I caught a cleric red-handed, abusing a student sexually. An inquiry was ordered.”

Mosques aren’t places of immunity from sexual abuse either. A recent story about a Muslm father who simply wanted to ground his son in the Islamic faith by sending him to an overnight prayer time at a local mosque reported that his son was molested while there.

Another case in 2009 involved a Bosnian imam accused of molesting young girls.

There are other stories of sexual abuse at the hands of imams as well. Though they haven’t (to my knowledge) been accumulated into a concise form, there have been reports and these few make one wonder if there aren’t more out there. Muslim leaders share this concern.

One can also read about Rape, Forced Marriages, And Child Soldiers — Life Under Islamic State In Afghanistan. Forced child marriages and rape have been committed all too often in Iraq, Syria, they have been less reported in Afghanistan. The numbers are much higher than we are aware of as in the Islamic world rapes woman can be put in prison as their word according to Islamic law is only worth 1/2 of a man’s.
Even the more “moderate” Islamic countries like Algeria and Tunisia, Islamic law allows rapists to escape prosecution by marrying their underage teenage victims.  What western society allows that?  NONE!
More disgusting stories out of the Islamic world like, a judge in Saudi Arabia has ordered a victim of gang rape to receive 200 lashes, there are thousands of such cases in the Islamic world.
Rashid’s latest deceptive piece is especially cynical. Not only does he claim that Islam is something other than what its most devout adherents claim it is every day, but instead of trying to show those devout Muslims where they’re wrong, he points the finger at Christianity and tries desperately to make it seem as evil as Islam.
Rashid also  claims, linking to his earlier exercises in deception – that Islam champions free speech and secular governance. Rashid is thus claiming that the overwhelming majority of Muslims worldwide, including the world’s foremost Muslim leaders, have no idea what their religion is all about. If Islam champions free speech, why has the 57-government Organization of Islamic Cooperation (OIC), the largest voting bloc at the United Nations, endeavored for years to compel the UN and Western governments to enact “hate speech” laws that would effectively criminalize criticism of Islam? Why has no Muslim government, and not even any Muslim cleric, denounced that endeavor?

If Islam is for free speech, then why, after the Charlie Hebdo jihad massacre of Muhammad cartoonists, did we see protests in Pakistan, Iran, Chechnya, and other Muslim countries against the cartoonists, and not a single protest by Muslims anywhere in favor of the freedom of speech?

If Islam calls for secular governance, why were there no secular governments at all anywhere in majority-Muslim countries until the 20th century, and the foremost one, Turkey, is now rapidly re-Islamizing?

Rashid claims that “‘Christian’ terror groups like the Lord’s Resistance Army and CAR militias commit terrorism that is as bad or worse” than that which is committed by ISIS. Really? What nation-sized territory do these groups control? What threats have they issued to perpetrate terror attacks in the U.S. and Europe? Where are their sex slaves like ISIS has?

Why is Rashid so silent about rapes in the Islamic world, is is biased, a liar or just blind?  Why isn’t he going to the imams and the mosques that support ISIS and criticizing the Muslim publications that are pro-ISIS and pro-al-Qaeda? Why is he not condemning the Islamic world for allowing child marriages?

Muslims need to do more to attach shame to such practices happening in the Islamic world; but by doing so they could also be insulting their Prophet himself a pedophile.

Rashid silence about the atrocities in the Islamic world is acceptance of this kind of behavior. It makes him complicit in the sexual exploitation of children.

I fail to understand why Muslims like Qasim Rashid are so vocal on abuses happening the west, but silent to the abuses in the Islamic world.

I am finding that more and more Muslims feel it is their duty to criticise others for actions they consider sinful – quoting the following popular saying of Muhammad to justify their interference:

“If you see something wrong, you should correct it with your hand and if you are unable to, then speak out against it and if you cannot do that, then feel that it is wrong in your heart.”

I wonder how, then, Muslims can remain silent when it comes to the sexual abuse of children inside the Islamic word?

In Case You Missed It:  9-11-2001 NEVER FORGET
Posted in Terrorism and tagged Islam, rape.

Clint Bolick entered college pursuing a career in teaching and politics. But then a summer internship with The Fund for...