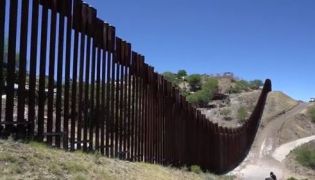 A border lawmaker had drawn up a plan to pay for the wall in part by fining Mexico and other countries $2,000 for every illegal immigrant caught crossing into the United States.

Arizona Rep. Andy Biggs, who has made is mark on Washington in just his first term, is pushing a plan that includes the tax on illegals and other ways to pay for the border wall demanded by President Trump.

The border wall could cost up to $25 billion.

The legislative proposal by Biggs, titled the Fund and Complete the Border Wall Act, also calls for full construction to begin next year and for some money go to the U.S. Border Patrol. It suggests these changes and taxes:

Other funding ideas have been pushed by the administration, including taxing money immigrants send home to family.

Said Biggs in a statement: “Even with a Republican-controlled House and Senate, we have failed to secure the funds for the border wall. In the meantime, our Border Patrol agents suffer demoralizing losses of resources and personnel. Some in Congress view border security as leverage for an amnesty deal, but that would turn a crisis into a catastrophe.

“This is why I introduced the ‘Fund and Complete the Border Wall Act.’ We must keep our promises to the American people. We must fund, start, and complete the border wall without further delay. I encourage my colleagues to join me in support of this legislation.”

A new metastudy by Serbian think tank Libek confirms that countries wishing to increase their economic growth—and reap the many...