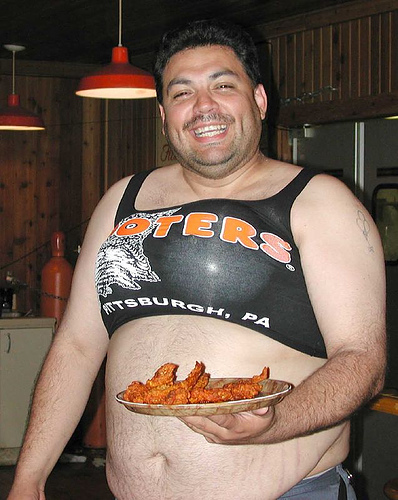 Conservative like Shoebat.com have been writing a lot about homosexuality and its effects on culture. Because a considerable amount of propaganda comes out of the LGBT community in the USA, she is one of the areas that has been most affected by it. Massive cultural shifts are happening to the point that even American society post-1960’s revolution is becoming increasingly unrecognizable.

In one example, Hooter’s restaurants have been shutting down because, as many LGBT activists are saying, homosexuality has so grown in popularity that men would rather look at another man than a woman:

Hooters, the restaurant which uses its waitresses’ breasts as a selling point, is closing some of its locations – and queer millennials are pretty sure they know why.

The 35-year-old chain is rethinking its strategy to appeal to the new generation, but rather than spending thousands on a marketing campaign, maybe Hooters should just acknowledge that a huge number of youngsters aren’t completely straight.

The message, simple and effective in nature, has attracted around 20,000 retweets and likes on Twitter and been upvoted more than 4,500 times on the LGBT subreddit, under the heading: “The real reason Hooters is closing ;).”

Users were quick to support the concept, with one writing: “we’re all gay.”

“Change it to ‘Eggplants’ where there’s vegetarian/vegan options and the waiters hang dong.”

Other theories have been put forward by people, including the popular hypothesis that Hooters’ struggles are down to the fact that millennials enjoy analingus – which PinkNews has definitively explained – more than breasts.

Another said: “PUT SOME ASS EATING ON THE MENU AND WE SET.”

It’s definitely an innovative suggestion, we’ll give them that.

One person simply wrote: “we eat ass now,” and they’re not wrong.

“Change the name to Dumpers and you’ll get your business back because we eatin ass out here,” came another tweeter’s suggestion.

“Have you met any millenials?” asked one commenter. “We love boobs and eat ass. We just hate bad food.”

The research also indicates that people “between the ages of 18 to 34 are far less likely to search for both big or small breasts compared to most age groups over the age of 35.” (source)

This study may be more accurate than what one might think. According to another article from the Daily & Mail, gay pornography has exploded in popularity among women, making it the second most watched genre now:

Expanding on what she finds appealing about gay male pornography — in particular, scenes featuring “uber-masculine” men — the 32-year-old says: “A part of me actually loves seeing them being humbled by dick. I love it. Because in that, they are as vulnerable as I am as a woman every day. It’s a fucked-up thing for me to want to see, but it’s beautiful nonetheless — just to see them being softened.”

“I don’t necessarily want to be performing any stereotypes of being ‘fucked like a woman’. I just want sex to be sex and have it be on equal footing where I have agency with what I like and what pleasures me. Where it doesn’t necessarily have to rely on me proving to the man I am sleeping with that I am a woman. Because part of that is also problematic. Like, what does it mean to be a woman? Does it mean being submissive and lying there thinking of England and having no agency in your pleasure?”

For Mokoena the genre is “much more egalitarian, in a way”.

“You actually have people who have agency in this act, together. And it’s beautiful to watch, too. Because there are two men, being vulnerable in front of a camera and you kind of get to see how sex should be — or how it should be performed — regardless of the gender of the person,” she says.

For clinical psychologist, Itumeleng Mamabolo, this makes sense because, he says, “you can go anywhere with fantasy and are only limited by as far as the mind can go”.

Mamabolo adds that women are generally more in touch with the fluid nature of sexuality and that there is less stigma for women to explore this aspect of themselves.

Malope adds that she now finds it “hard to watch anything but empowered sex”.

The adult “industry”, while immoral, is a reflection of social trends in that it shows some of the deepest feeling that a people hold about what they value and enjoy. This shows that even women no longer value natural relations, but are willingly embracing sodom.

There are many dangers that face society today, and the LGBT is one of the greatest ones that is simply not discussed. The Bible clearly says that homosexuality is a sin that makes one worthy of death, and that it is the manifestation of serious sin committed repeatedly. The rise of the LGBT corresponds with the repaganization of the Western world that is taking place today. Since culture, politics, and economics are connected, the massive cultural changes being brought in by the LGBT are also shaping the economic and political choices of the future, and at that a future that is reflective more of the ways of pre-Christian heathens than anything considered “modern.”

Indeed if trends continue, the ways of the past will be the ways of life in the future, with different tools but the same savagery.

In Case You Missed It:  First JPMorgan’s Dimon, now Goldman Sachs’ Waldron: the world is about to get hit with an economic “hurricane”
Posted in Freedoms and tagged homosexuality, Liberalism.

We break down the top media moments this week—and plenty of misses. Media hysteria was at an all-time high. According...