The results are “rigged” against him and other conservatives, he wrote on Twitter.

Trump also alleged that 96 percent “of results on ‘Trump News’ are from National Left-Wing Media” but he did not identify a source or any evidence. He appeared to be referring to a story published over the weekend by conservative media company PJ Media that reported “96 Percent of Google Search Results for ‘Trump’ News Are from Liberal Media Outlets.”

The president’s tweets come as more tech companies, including Google and Facebook, make investments to limit the spread of what they consider misinformation online. These companies get to decide what they think is misinformation and what is not, not the readers,

Google search results for “Trump News” shows only the viewing/reporting of Fake New Media. In other words, they have it RIGGED, for me & others, so that almost all stories & news is BAD. Fake CNN is prominent. Republican/Conservative & Fair Media is shut out. Illegal? 96% of…

….results on “Trump News” are from National Left-Wing Media, very dangerous. Google & others are suppressing voices of Conservatives and hiding information and news that is good. They are controlling what we can & cannot see. This is a very serious situation-will be addressed!

Watts Up With That posted a research report written by Leo Goldstein warned that “Google Search is found to be biased in favor of left/liberal domains and against conservative domains with a confidence of 95 percent.” The report also argues that while certain “conservative domains are blacklisted,” the good standing of “hard-Left domains” in search results “raises suspicions that they have been hand-picked for prominent placement.”

n the report, Goldstein explained that Google provides about 25 to 30 percent of user traffic to an “average website.” However, Goldstein’s report states that the percentage of Google traffice for a number of conservative website’s is well below that benchmark.

Goldstein’s report highlighted a list of conservative websites that seem have been blacklisted by Google. That list includes sites such as The Gateway Pundit, PJ Media, American Thinker, Red State and Drudge Report.

In addition to the report, Goldstein wrote letters to the various websites to warn them about his findings.

“You might be interested to learn, that your websites have been almost blacklisted by Google. ‘Almost blacklisted’ means that Google search artificially downranks results from your websites to such extent that you lose 55 percent [to] 75 percent of possible visitors traffic from Google,” Goldstein’s letter explains, according to PJ Media. “This situation is probably aggravated by secondary effects, because many users and webmasters see Google ranking as a signal of trust.”

More results of the study were stunning. Google searches returned twice as many pro-Hillary Clinton news articles as Yahoo searches.

Perhaps even more stunning was that men and blue-state residents saw more than double the number of pro-Clintonarticles than women and people living in red states, Mr. Epstein, of the American Institute for Behavioral Research and Technology, and Robert E. Robertson, a professor at Northeastern University, argued in a report this year.

Mr. Epstein said he is still studying what caused the bias but worries that Google’s search algorithm — a form of artificial intelligence that chooses what results a searcher is looking for — ranked pro-Clinton articles ahead of positive articles about her opponent, Donald Trump.

The president has also threatened to probe allegations of Twitter’s “shadowbanning” conservative accounts, making it more difficult for their profiles to be discovered in the search engine.

This site Conservativepapers.com has been recently banned on Twitter and they refused to describe why they banned this sites account. 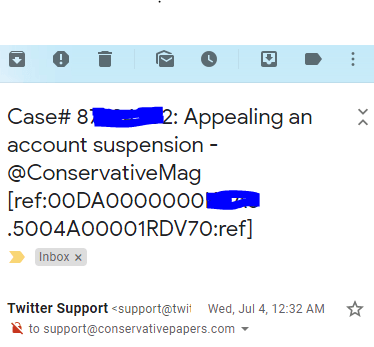 ALTERNATIVE SEARCH SITES:  (You can make one of these your default search page)

In Case You Missed It:  Conditions “worse” than Arab Spring coming to a city near you, warns UN food head amid worsening inflation
Posted in Freedoms and tagged Censorship, Google.

The commander of the navy of Iran’s Islamic Revolutionary Guard Corps, Gen. Alireza Tangsiri, warned on Monday that Iran maintained control of...