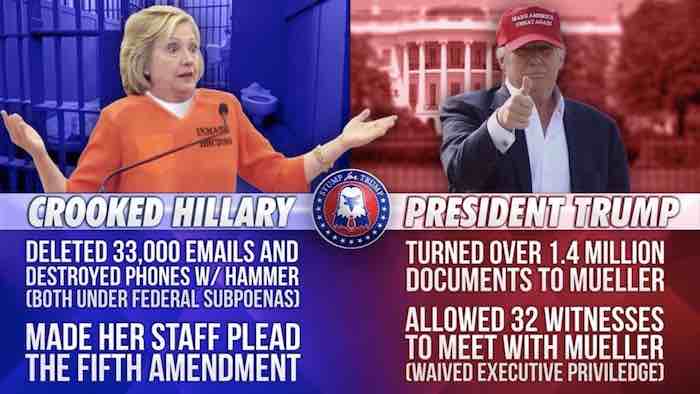 Two years ago, October 2nd, a news site called Canada Free Press scooped this most recent development in Hillary’s e-mail shenanigans. My article entitled, “Finally I Can See What ‘Emailgate’ is REALLY All About!” spelled out the hidden agenda behind Secretary of State Clinton carrying home her classified digital work/e-mails to what I then called a “do-it-yourself, gas-powered, home run computer system.” The Daily Caller News Foundation has now reported that the unauthorized and completely nonsecure computer server at the Clinton home was obviously hacked by a Chinese firm that was “… Involved in collecting intelligence for China.”

In my article I had compared the 2001 discovery of Robert Hanssen’s selling FBI secrets to Russia, with what Hillary did with her computer several years later. I had pointed out that, with the advent of the cyber world, a much sharper Hillary Clinton didn’t have to put top secret material into trash bags under a bridge across the river from DC (as Hanssen had done in exchange for trash bags filled with cash from the Russians). I had pointed out how easy it was to just throw all of our most sensitive, high security material onto her own server and then sell ‘back doors’ (hacks) to whomever was willing to pay the asking price. The beauty of the whole scenario for Hillary was what her legal mind would have instantly identified as “plausible deniability”. That seemed pretty obvious to me, anyway.

It had dawned on me how Hillary, now morphing into an elderly granny-type, could easily, in the event of being caught at such a scheme, merely take a step back and declare, “Gee, it was just a matter of convenience. Everybody uses these newfangled appliances – from cell phones to laptops to PCs – to expedite the transmission of all sorts of stuff as we do our daily government business!” And then, after the fact, even high-ranking problem solvers like James Comey could help her along by declaring her mistakes to be an unfortunate byproduct of well-meaning carelessness – words to that effect. But I had gone on to hypothesize that the Clinton Foundation could act as the teller and cash drawer in the sales of secrets that even our Congress was ultimately kept from seeing when they required the hard drives that she went on to ruin during the investigation of that whole mess. Wow.

I also thought it was interesting how foreign governments – people who were not our friends – were donating huge amounts of money to the Clinton Foundation – and paying MASSIVE speaking fees to hubby Bill. Looking back on that, I suppose it was just because they wanted the breaks from all those big deductions at tax time. But wait … China, Russia, the United Arab Emirates and others … they don’t need American tax deductions. Do they? Well, I guess they just wanted to get behind all the good work the Clintons are doing for the hurting world out there. So, don’t get me wrong, I understand that a whopping 5% to 7% of Clinton Foundation money goes to all those worthy causes annually!

Back in 2015-16 when the whole ‘Emailgate’ was being unearthed – you can go back and look for yourself – all of liberal media were out there scrambling like scalded apes to try and bury the whole thing. Newsweek’s senior writer, Kurt Eichenwald, wrote an opinion piece in February of 2015, “Why Hillary Clinton’s “Emailgate” Is a Fake Scandal”, that I today find downright embarrassing, given all the facts that have emerged since he tossed that bucket of water on the blaze that did eventually get all but put out. He was only one of many who, like always, can find a way to make fun of the fuddy-duddy right for daring to find fault with what clearly appears to be the rotten criminal messes caused by the rotten criminal left.

It reminded me of how, by the end of the day it was seen here in America, the liberal news media had completely explained away Obama’s secret promises to Russia overheard on a microphone that wasn’t supposed to be on. I have often asked what today’s liberal media would do to Donald Trump if they had heard him in similar circumstances. And in fact, we have seen the media and the democrats retrofitting him into all sorts of criminal plots. But what in the world would a Mueller do to Donald if he discovered that he was carrying home briefcases full of government secrets to his homemade server at Mar-a-Lago? Forget about it.

Just a few days after my Canada Free Press story broke, Congressman Jim Jordan, questioning James Comey, held up a stack of papers – looking just like the material Hanssen left under the bridge in Virginia – and told Comey we were now dealing with ‘ones and zeros’ instead of burnable paper. And he chided Comey for not treating Hillary’s criminal negligence with the new, high-tech respect that it deserved. Fifty thousand tons of all sorts of damning evidence for felonious and traitorous crime has been left lying around for the liberal media to trip over while they are in the process of going after President Trump to help the left to crucify him. And I mean, why not? All the treachery of Obama’s shadow government and the Clintons’ bloodsoaked trail from Little Rock to DC (and to Russia and on to China) doesn’t even come close to comparing with the heinous sedition of Trump’s trouble with a headline-grabbing prostitute and him allegedly showing disrespect to a professional politician who apparently embraced his weird hatred toward our President all the way to his grave.

Hillary Clinton makes Benedict Arnold look like Betsy Ross. And the liberal media are working their tails off to try to vilify the best president since Ronald Reagan. I smell a rat. It is a stench that has gone on for years.

By Theodore Shoebat Six thousand people in Germany took to the streets to make a nationalist protest with intense sentiments...