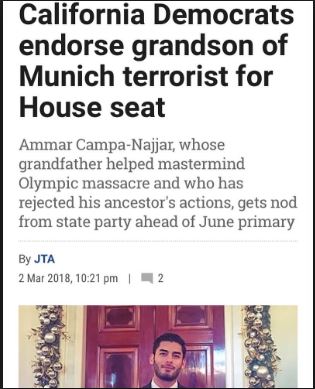 In the sanctuary state of California, more than one million illegal aliens are already registered to vote. That could push both candidates over the line in November

Ammar Campa-Najjar, 29, is running against Rep. Duncan Hunter in California’s 50th congressional district. Campa-Najjar comes billed as a “Palestinian-Mexican” American but the leftist Democrat, who has never held office, turns out to be a Municharian candidate of sorts.

His grandfather is Muhammad Yusuf al-Najjar of Black September, the PLO death squad that kidnapped, murdered and mutilated 11 Israeli athletes and coaches at the Munich Olympics in 1972. The next year in Beirut, Israeli commandos killed the terrorist murderer.

According to the San Diego Union-Tribune, orphaned son Yusuf al-Najjar “moved to Egypt and later immigrated to eastern San Diego County where he met his wife, Abigail.” The piece does not explore how al-Najjar was able to enter the United States with such ease, but the terrorist’s son wasn’t exactly fond of the place.

When Ammar was nine the family moved halfway around the world to Gaza. The reason for the move is unclear, but it probably wasn’t for job opportunities, better schools and more convenient shopping.

After four years in Gaza, campaign literature explains, the family returned to San Diego, where Ammar became a “youth leader,” and in 2012 he served as Deputy Regional Field Director for President Obama’s reelection campaign. The terrorist connection didn’t bother the president, who in 2009 called the terrorist Nidal Hasan’s murder of 13 Americans “workplace violence.”

The Munich terrorist connection did not emerge until last February, when the Israeli Haaretz broke the story. Ammar called the revelation “unfortunate” and claims he is all for peace now. The terrorist’s grandson got the endorsement of his former White House boss and Elizabeth Warren and socialist Alexandria Ocasio-Cortez are also on board.

While Campa-Najjar has been hiding his family connections another candidate has been busy creating them. State senate boss Kevin de Le??n is facing off against fellow Democrat Dianne Feinstein for the U.S. Senate, but as the Sacramento Bee explains, “the name on his birth certificate isn’t Kevin de Le??n.” On his birth certificate and voter rolls, the name is Kevin Alexander Leon.

Last year the Democrat began claiming his father Andres Leon is “a 40-year-old cook whose race was Chinese and whose birthplace was Guatemala” and mother Carmen Osorio, “was also born in Guatemala.” Their child Kevin “spent time on both sides of the border” and “identifies strongly with Mexican culture.”

The story defies belief but the establishment media have not mounted an investigation. The man who styles himself Kevin de Leon acknowledges that half his family used false documents, so no mystery why he authored California’s sanctuary state law.

On the other hand, the man registered to vote as Kevin Alexander Leon is not exactly fond of Asian refugees and last year spearheaded a smackdown of Republican Janet Nguyen, born in Communist Vietnam. When she spoke out against Tom Hayden, Democrats had her carted off the Senate floor.

The termed-out state senate boss trails Feinstein in the polls and Ammar Campa-Najjar remains far behind Duncan Hunter, despite the Republican’s recent indictment on charges of misusing campaign funds. Even so, the son of the Guatemalan-born Chinese cook and the grandson of terrorist Muhammad Yusuf al-Najjar could both be due for a surge.

In the sanctuary state of California, more than one million illegals are already registered to vote. That could push both candidates over the line in November.

Iran Embassies are Spy Hubs for the Mullahs

By Peter Paton The recent attempted Iran terror attack in Paris at the venue of the Iranian Resistance, the...