As Sen. Chuck Grassley, R-Iowa, who chairs the Senate Judiciary Committee, gave his opening statement, Democrats urged the panel to adjourn and delay the hearing, in view of the release of 42,000 documents relating to Kavanaugh’s prior service in the executive branch on Monday night.

“We cannot possibly move forward, Mr. Chairman,” Sen. Kamala Harris, D-Calif., said, arguing that the hearing should be delayed until those records were reviewed.

Sen. Sheldon Whitehouse, D-R.I., argued the hearing should be deferred while the committee attempts to determine whether the Trump administration validly asserted executive privilege over certain documents Kavanaugh produced in the Bush White House.

Grassley was informed by President George W. Bush’s presidential records representative Friday night that approximately 30,000 documents Kavanaugh generated as a White House lawyer would not be released given their supposed sensitivities.

Sen. Dianne Feinstein, D-Calif., the ranking member of the committee, noted that Kavanaugh’s nomination was submitted as former aides and campaign advisers to President Donald Trump were indicted or convicted, suggesting an embattled president should not make appointments to the high court.

Senate Minority Whip Dick Durbin invoked the legacy of the failed nomination of Judge Merrick Garland, noting the GOP held his nomination in abeyance for nearly a year.

Senate Majority Whip John Cornyn of Texas argued that Democratic senators would be removed for contempt of court if the hearing were taking place in a judicial setting, and elsewhere accused them of conducting the hearing by mob rule.

The Democratic interventions were repeatedly supported by loud shouts, applause, and cheering from progressive activists in the back of the hearing, many of whom were forcibly removed by Capitol Police.

“Kavanaugh is a danger to the future of America,” one demonstrator said, fearing Kavanaugh would provide the fifth vote to overturn Roe v. Wade.

“This should be an impeachment hearing, not a confirmation hearing,” said another, referencing Trump. 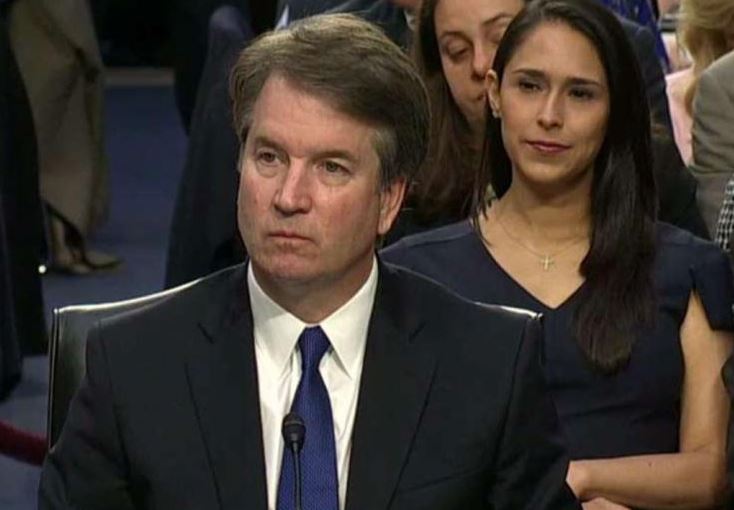 Almost 20 protesters were arrested by 10 a.m., just 30 minutes after the hearing began.

Even after their removal, protesters concentrated near the doors of the hearing chamber chanting anti-Kavanaugh slogans, which were clearly heard in the room throughout the morning.

Fox News’ Shannon Bream reported that Kavanaugh’s daughters were escorted out of the hearing room as the interruptions continued.

Grassley eventually proceeded by reading a portion of his opening statement addressing the concerns Democrats broached.

“The American people have unprecedented access and more materials to review for Judge Kavanaugh than they ever had for a Supreme Court nominee,” Grassley said. “And to support the review of Judge Kavanaugh’s historic volume of material, I’ve worked to ensure that more senators have more access to more material than ever.”

He added that Democratic complaints over the scope of document production were “boring,” as they have been repeated for much of the summer.

Kavanaugh was accompanied to the hearing by his family and senior members of the Trump administration.

Content created by The Daily Caller News Foundation is available without charge to any eligible news publisher that can provide a large audience. For licensing opportunities for this original content, email [email protected].

Since announcing their new advertising campaign will be led by Colin Kaepernick, the social media backlash has dominated the virtue-signaling efforts we...