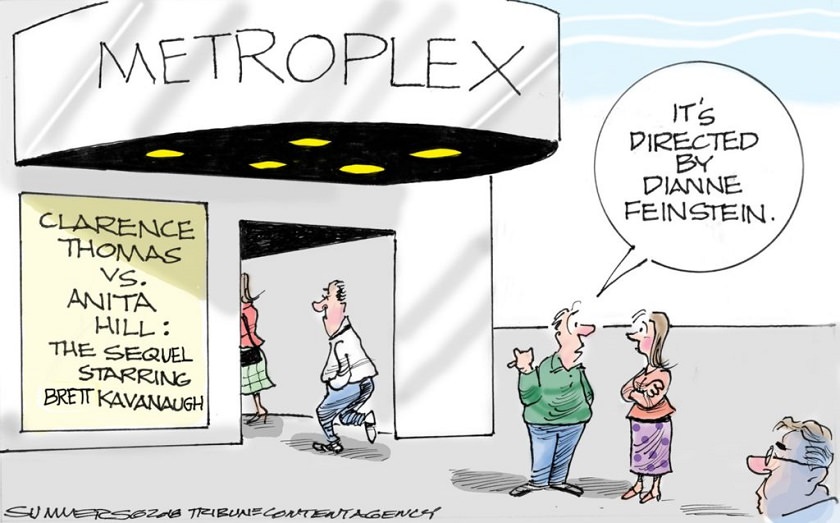 Sen. Dianne Feinstein has much to be ashamed about in her lengthy political career… but first comes to mind is her reprehensible attempt to prevent Brett Kavanaugh’s confirmation to the United States Supreme Court… a tactic right out of Saul Alinsky’s Rules for Radicals.

“Pick the target, freeze it, personalize it, and polarize it.” RULE 12

Democrats have done everything they can to delay and stall the vote on Kavanaugh’s nomination, clearly fishing via social media for more accusers. This is nothing more than the most vulgar smear tactics of a good man, and a highly qualified judge.

Dianne Feinstein started this snowball lie which she said was credible, but sat on until it was clear that Kavanaugh would sail through the Judiciary Committee hearings and be confirmed. This was nothing more than a gross attempt at political assassination.

Saul Alinsky said you could achieve your radical goals by demonizing the opposition.

However, the unintended consequences are far greater—not only to Judge Kavanaugh and his family, but to all women, and women who are survivors of sexual abuse, sexual assault. Attempting to halt Kavanaugh’s nomination is reprehensible, but this lie, and the new lies undermine the credibility of all women revealing their stories of assault and abuse.

“Make the enemy live up to its own book of rules.” RULE 4

Sen. Dianne Feinstein should be censured for her deception and manipulations. Article I, Section 5 of the Constitutionprovides that each House of the Congress may “punish its Members for disorderly Behaviour, and, with the Concurrence of two thirds, expel a Member.” Feinstein deserves much harsher punishment, but should be censured at the very least.

In substance, she “deliberately misled and deceived” her fellow senators, with the “effect of impeding discovery of evidence” relevant to the performance of their constitutional duties. No one should know better than Feinstein herself that such deceptive and obstructive conduct, widely regarded as “unacceptable,” “fully deserves censure,” so that “future generations of Americans . . . know that such behavior is not only unacceptable but also bears grave consequences,” bringing “shame and dishonor” to the person guilty of it and to the office that person holds, who has “violated the trust of the American people.”

“These quoted words all come from the resolution of censure Feinstein herself introduced concerning President Bill Clinton’s behavior in connection with his sex scandal,” Michael Schwartz wrote at National Review. “She can hardly be heard to complain if she is held to the same standard.”

Feinstein’s abuse of power cannot go unpunished, and the American people cannot continue to accept lies and corruption from Democrats. What Feinstein did is just one more example of how the Democrats have used government to further their agenda, and to retain power.

Alinsky: “The third rule of ethics of means and ends is that in war the end justifies almost any means….” (p.29)

The Left is falsely confident that this charade will derail Brett Kavanaugh. However, most Americans also do not believe Christine Ford. In fact, only 25% of women believe Ford’s accusations against Judge Kavanaugh. A new poll from The Huffington Post indicates that only a quarter of women believe that the sexual misconduct allegations against Supreme Court nominee Brett Kavanaugh are credible, according to a new poll from HuffPost/YouGov. The Gateway Pundit reported.

Lastly, we know no more today than we did when Christine Blasey Ford leveled her accusations at Kavanaugh over one week ago—other than she scrubbed her social media, already had taken a lie detector test, and had hired powerful Democrat lawyers in Washington, DC with George Soros connections…

So while all of the Left is ignoring actual and recent assault charges against Dem. Keith Ellison by a girlfriend… and Dem. Sen. Sherrod Brow, facing his own #MeToo moment from his past, with court records showing Brown’s ex-wife accused him of assault, and a judge had to issue a restraining order… and loudmouth Hawaii Dem. Sen. Mazie Hirono, blaming all “men in this country” for perpetuating sexual assault and telling them all to “just shut up,” took campaign contributions from Sen. Tom Carper (Del.), who has admitted to punching his wife hard enough to give her a black eye. These are the people we are supposed to be listening to? They have no credibility. In fact, they are embarrassing themselves, and making a mockery of the US Senate.

In a post on Cult of the 1st Amendment blog, this article and headline explained WHY CHRISTINE BLASEY FORD’S HIGH SCHOOL YEARBOOKS WERE SCRUBBED: Faculty Approved Racism, Binge Drinking and Promiscuity by the female students. The article will astound you.

My high school yearbook of the same era was all about sports, clubs, cheerleaders, Homecoming parades, games and dances, mathletes, chess club, and of course… the annual girls Powder Puff football game. (I guess that’s out now with gender neutrality…)

I will venture a theory that if anything happened to Christine Blasey Ford in high school, she’s lived with the regrets of many high school women who partied hard and now want someone to blame for their drunken, promiscuous behavior—and is willing to take down a good man because of her leftist politics, savage single-mindedness, and ruthless emotional superiority.

The left would have you believe that all women should automatically be believed simply because they’re women. Do women have a special honesty gene? There is no evidence at all to back Blasey Ford’s accusations.

Democrats are so corrupt, and such vile liars and cheaters, they will do anything to win.

Alinsky’s RULE 8: “Keep the pressure on. Never let up.”

In Case You Missed It:  AZ forensic audit results show SYSTEMIC fraud, faked votes, more than 5X the margin of "victory" from just one county out of the entire state ... prepare for CRISIS THEATER distractions
Posted in Freedoms and tagged Democrats, Feinstein, lie.

By Lee Cary Back on February 23, 2018, the CFP posted an article entitled “Christopher Steele, MI6, and the Trump Dossier.”...