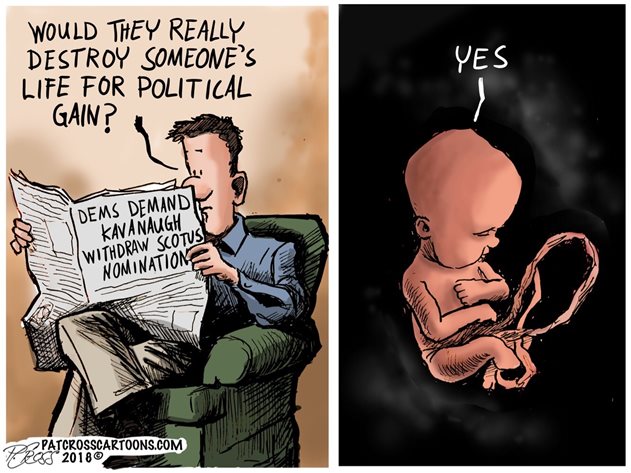 After all of the false claims from Kavanaugh’s accusers and the increasingly more…and more bizarre stories (one completely incredible accuser said she attended 10—count them TEN—of Kavanaugh’s sex-train rape parties), I fully expect the Democrats to bring some other accuser forth shortly to claim that she has proof the good judge is a cannibal and another to say that she witnessed him performing Necrophilia.

Note: I am truly beginning to question whether or not the human experiment has—at all—worked or if it’s only recently that human beings have begun to devolve so badly and so completely.

We thought—years ago—that now-Associate Justice Clarence Thomas’ filled with lies trial by fire was as ugly as they could possibly come.  But, that was before today’s seemingly soulless and/or ‘sold-their-souls-for-power’ Democrats (and to be fair RINOs) had emerged as Congressional political “leaders.”  The destruction of Judge Kavanaugh demanded by the Luciferian Left politicos is nastier than almost any of us could imagine that it would be.  Ms. Blasey-Ford—who is still unclear as to when or where the alleged attack occurred and originally said she was drunk (although now she says she only had “one beer”)—related her story with the expected dutifully tremulous and childlike voice to the senators assembled in front of her.  She cannot even remember who drove her to the party and/or who drove her home.  And, no one has yet said he/she or they drove her anywhere.

Initially Blasey-Ford (a lifelong Democrat and activist) said that she couldn’t-be-sure-but-thought-it-was Brett Kavanaugh.  Now, she says she’s certain it was Kavanaugh.  So…her memory has gotten better the longer it is away from the incident?  If we are to actually be rational…that’s not likely.  For those who have endured the dehumanization and fear at the hands of their rapists, the rape is etched permanently in memory.  She also said that that it was quiet downstairs when she had gone upstairs to find a bathroom.  She said that when she was then attacked by Mark Judge (who pushed her into the arms of the waiting Brett Kavanaugh lying on a bed) who slammed the door and turned on blaring music.  Really?  And, no one heard the slammed door or the loud music?  Remember, she said it was quiet downstairs.

Ms. Blasey-Ford has been—as would certainly be expected—coached by her attorney and, as a side note, all of whom are leftist activists and advocates.  It has been—accurately I believe—stated by many that this lunacy of the destruction of Judge Kavanaugh and his family by the Democrats is due to their fears that (if confirmed) he may attempt to revisit Roe V Wade, in order to overturn it.

100 PercentFedUp.com writes that:  “During a conference call on July 10th (around the same time that Christine Blasey Ford’s letter was sent to Democrat Senator Diane Feinstein) Ricki Seidman, a Democrat operative, Clinton White House official and advisor to Kavanaugh accuser, Christine Blasey Ford, admitted to a strategy Democrats had to destroy the nomination of Judge Kavanaugh,” while Townhall reports that Democrat operative and former Hillary Clinton top spokesman Brian Fallon outlines the ways in which they planned to take Kavanaugh down no matter the cost to the judge and his family.

As I write this, Sen. Richard Blumenthal (D-CT) has taken a pot shot at President Trump and Ms. Blasey-Ford has just said she has no idea who set up or paid for her polygraph test.  The pot shot from Blumenthal is what I would expect from someone who has practiced stolen-honor but, having no idea who scheduled and/or paid for your own polygraph test seems odd to me…does it to you?  She, also, said that she had seen Mark Judge at a Safeway store after the ‘incident’ and had said “Hello” to him.  That really seems odd!  Seeing one’s accomplice toward attempted rape would not elicit a childlike “Hello.”  She said “he looked a little ill” when she spoke to him.  That stretches credulity to the breaking point.  Also stretching credulity is the fact that none of the people (her witnesses) who were supposed to have been at this party/gathering can remember or corroborate it actually ever occurred.

The pretense of being a child or unknowing waif which was presented by Blasey-Ford (a Ph.D no less) throughout her testimony simply doesn’t ring true on any level.  Neither does most of her testimony.  And, what doesn’t help matters of credibility is that all of her attorneys are leftist activists and one of them was/is a Clinton lawyer and one currently works as Andy McCabe’s attorney.  Hmmm.  As Judge Judy says:  “If it doesn’t make sense, it’s not true.”

Observation:  These humans who continue with their overt and covert deceptions and destruction against their fellow men and women had better shape up…or they may very well be deleted someday soon.

“You shall not bear a false report; do not join your hand with a wicked man to be a malicious witness”—Exodus 23:1

In Case You Missed It:  Under covid tyranny, US hospitals have become MURDER FACTORIES where ivermectin is forbidden because it saves lives
Posted in Freedoms and tagged U.S. Supreme Court.

9 Key Moments as Brett Kavanaugh Responds to His Accusers

Supreme Court nominee Brett Kavanaugh firmly and at times tearfully denied the late-breaking allegations of sexual misconduct against him in...