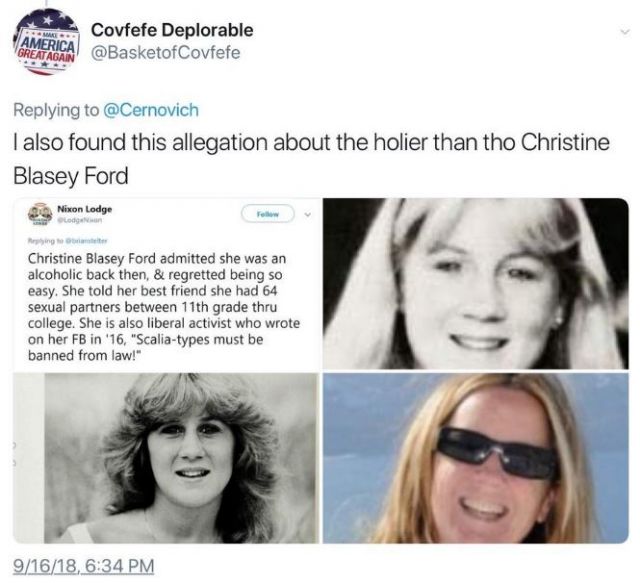 A Supreme Court Judge Brett Kavanaugh is tied up in a controversy that can prevent him from being elected to the Supreme Court for life.

All of the other witnesses have come forward and stated they have no recollection of the event, and have taken a step further to say that Brett Kavanaugh is an honest, ethical, and respectable individual:

Everyone at the party has said they have no idea what Christine Blasey Ford is talking about, even her longtime friend Leland Ingham Keyser! Also potentially damaging to Blasey Ford’s claim is a theory presented Thursday by Ed Whelan, a former clerk to USSC Justice Antonin Scalia and currently president of the Ethics and Public Policy Center (EPPC), a conservative think tank. Using entirely circumstantial evidence which could certainly ruin the life of the man at the center of the new theory, Whelan suggested that Kavanaugh’s high school doppelgänger, Chris Garrett, may have in fact been responsible for Blasey Ford’s recollection of the alleged incident.

Before we dig deeper let’s understand deep state forces a bit better. The CIA, et. al (this means in latin ‘and friends’) utilize a number of techniques to achieve their goals, ‘whatever works.’

After seeing the CIA in action against information heroes like Julian Assange, we created a simple hypothesis based on history, based on their traditional Modus Operandi (MO). What if this ‘incident’ was a total fabrication, part of a CIA “Honeytrap” ? To test our hypothesis, we did a simple Google search to see if there were any keyword relations including ‘clintons’ and ‘cia’ and sure enough, all 10 of the top 10 results, including the most interesting story which has already been reported. This person’s father works for the CIA but not only that – he was an executive of the bank that handles the CIA’s black budget! You can’t make this stuff up!

Christine’s Father Has Worked, and Still Works, For the CIA.

In addition to the other info that has recently surfaced, an article from the site ImpiousDigest states that Christine’s father, Ralph G Blasey Jr. had worked for the CIA and was a vice president, at one time, for the National Savings and Trust “black budget bank” allegedly known for funding CIA deep state operations.

The article does cite numerous articles for this claim, stating:

Linked to Dr. Blasey’s SVR file of known and/or suspected CIA operatives, this report notes, is that of her father Ralph G. Blasey Jr.—a proven CIA operative who, from June-1962 to January-1974, was the Vice President of National Savings and Trust of Washington, D.C.—a CIA black budget bank best known for being 100 paces from the White House, and whom, in 1998, was taken over by SunTrust Bank—whose majority share owner is the CIA-linked investment fund BlackRock.

The importance of noting the CIA banking connections of Ralph G. Blasey Jr., this report explains, is due to the outbreak of what is now known as the “CIA Bank War”—and whose start of, in 1982, a CIA seized from publication news report (Declassified in Part-Sanitized Copy Approved for Release 2012/09/05: CIA-RDP90-00965R00150010-7) describes as: “This is Wall Street, the center of the international banking system, a system on the edge of a crisis so severe that the Central Intelligence Agency is preparing drastic measures.  Something must be done to avert the breakdown of the Free World’s monetary system.”

The article also states that Blasey JR. is still a Vice President for a security guard corporation that provides protection to Deep state entities. The article elaborates:

Whether or not this is 100% accurate cannot be said, but it does give some insight on potential motivations on why Ford decided to come out now, instead of earlier.  It is also important to note that Blasey Jr. did, in fact, know of a reaarcher while at the CIA, Stanford University Psychiatric Professor Dr. Frederick T. Melges, who helped craft the highly publicized and widely controversial MKUltra Program. Christine, to reiterate, is a professor at the same university working in psychotherapy, espeically the affects of psychotropic drugs on children.

Let’s also remember that we have seen this before, take a look at the case of Julian Assange who was facing serious charges – and these charges were originally what led him to hide (not charges against Wikileaks itself).

Just take a look at this example of Julian Assange’s accuser:

What has most engaged the conspiracy theorists and Assange’s more excitable defenders, however, are a few key incidents in Miss A career, in particular that she is said to have worked in the Swedish embassy in the US, and wrote her university thesis in 2007 on a vision of Cuba after the death of Castro.

This has led to widespread allegations that the woman is a CIA agent, planted as a honeytrap to bring down Assange. One blogger notes: “[Assange] just happens to meet a Swedish woman who just happens to have been publishing her work in a well-funded anti-Castro group that just happens to have links with a group led by a man at least one journalist describes as an agent of the CIA: the violent secret arm of America’s foreign policy.

All in a days work.

For a very detailed and well documented case about the CIA Black Bank which is interesting reading, see this article from Impious Digest:

An intriguing in-depth new Foreign Intelligence Service (SVR) report circulating in the Kremlin today states that a Stanford University Psychiatry Professor named Dr. Christine Blasey has become the latest centerpiece of a Central Intelligence Agency (CIA) plot to harm President Trump with her last-minute allegation, just days prior to US Senate confirmation, that Supreme Court nominee Brett Kavanaugh had attempted to sexually assault her over 30 years ago when they were teenage school children—while being kept from the American people about Dr. Blasey is that she currently oversees the CIA Undergraduate Internship Program Stanford University developed by the notorious CIA-connected Stanford University Psychiatric Professor Dr. Frederick T. Melges—who himself, in 1985, took into his care the homeless woman Lois Lang who assassinated CIA paymaster Nick Deak—and that afterwards saw the CIA’sblack operations monies being controlled by Ralph G. Blasey Jr.—who, not so mysteriously, just happens to be the father of Dr. Christine Blasey.

Of course, this theory is perfectly, logically, and legally impossible to prove, as the CIA operates under the explicit cover of national security, which is the end all and be all of the Shadow Government.

What this means is just simply this is another cut in the death by a thousand cuts approach taken by deep-state Democrats and Crooked Clinton supporters which will do anything to justify their own means, to avoid restoration of ‘rule of law’ and defend and/or cover up their own illegal acts in any way possible.  Stay tuned, this is getting interesting.

In Case You Missed It:  No Parades for Fauci on His Retirement – His Usefulness Has Ended – He’s No Longer Needed
Posted in Tyranny and tagged CIA.

Everybody on plane survives crash landing in Pacific lagoon

An Air Niugini aircraft overshot a Chuuk Island runway in Micronesia. The aiports landing strip is one of the shortest...