Who created “multiculturalism”? Why did he think it would work? Where does it find fertile ground to flourish? What might be its end result? Who supports it in the face of devastating failures worldwide?

In 1951, Jamaican-born Stuart Hall who studied at Oxford University, described as the “godfather of multiculturalism”, became one of the founding fathers of cultural studies. He became one of the left’s most influential thinkers, placing questions of race, sexuality, identity and the media firmly at the center of academic debate.

Somehow, while he watched racial conflict from his academic chair, he theorized, against historical evidence, that human beings from incompatible cultures, might blend into a peaceful bouquet of humanity with neighboring cultures.

At the same time, he failed to incorporate the fact that advanced cultures accepted individuals from stone-age cultures, but never the other way around. Example: Somalians in Africa, hunter-gatherers living in thatched huts without toilets or running water, may migrate into America, Canada or the United Kingdom, but Western citizens abhor moving from their cultures to Somalia. It’s always a one-way ticket from a substandard culture into a highly specialized culture.

“The reason why multiculturalism exists is to pretend that inferior cultures aren’t inferior and that superior cultures aren’t superior. It’s a way to tell nice lies about rotten cultures and rotten lies about great cultures. And from this, we’ve set ourselves up not only to believe the enemy propaganda that ‘Islam means peace’, but to propagate it ourselves, all the while blaming ourselves for the enemy’s war on us.”?~ Bosch Fawstin ~

Unfortunately, toleration of an incompatible culture from the third world being injected into a first world culture leads to conflict. Note that every culture on Earth challenges an established culture for dominance. With enough numbers, the guest culture displaces the host country’s culture, i.e., UK, Sweden, Norway, Germany, France, Belgium, Holland, etc.

Writer Ken Eagle said, “What the inferior culture really wants is to be able to live in a society with the superior culture in order to out-breed him. He hates the most the idea of the superior race. This is why the inferior culture will almost always support ‘multiculturalism’, ‘pluralism’, ‘equal rights’, and ‘free speech’. He can say ‘discrimination is wrong on all counts’, and that it is wrong to be prejudiced to have an opinion. If he succeeds in living in a society with superior people for long enough, he wins, he makes it, and he dominates.”

In the end, Aristotle said, “Tolerance and apathy are the virtues of a of a dying society.”

Today, in America, with 44 million foreign born immigrants and tens of millions of their offspring, we watch this country fracturing and fragmenting at the seams.

Once a community ingests 5, 10 or 20 different cultures, it cannot function as a community. In reality, multiculturalism creates racial, class and identity conflict. The dominant ethnic group tolerates, but does not mix or wish to integrate with a third world culture. Both ethnic groups or multiple ethnic groups cannot find common ground because of incompatible language, ethos, religion, culture and world views.

For example: in Minneapolis, MN, 120,000 Somalia refugees created what locals call, ‘Somaliland’. Over 90 percent live on welfare. Their average IQ: 68. In other words, the USA with an average IQ of 98, imported people living pretty close to the Stone Age. In fact, most of Africa runs a 68 to 70 IQ. While living in the most resource rich continent in the world, they cannot learn modern agricultural methods to feed themselves. Thus, millions starve to death and live in huts without water, food or work. (Source: World ranking of countries by their IQ,https://iq-research.info/en/average-iq-by-country)

What occurred with this multicultural experiment? Answer: a parallel society of Somalians who cannot and do not assimilate into American culture, but create their own parallel society based on welfare and turf. The majority of Somalians can’t exist without welfare to feed, house and care for them. They resemble fish out of water or people without an American identity living within America.

If an American moved over to Somalia, the same would hold true. That American could not function in Somalian society.

By looking at Detroit, Michigan, you’re seeing Moslems become the dominant culture. The U.S. Government planted 300,000 of them there after 1.2 million Caucasian Detroit citizens fled from the racial conflicts of the 80s and 90s when blacks became the dominant race. Muslims also live on welfare and by de facto cultural actions of their majority numbers, practice Sharia Law. Which violates our laws: McCarren-Walter Act of 1952. America now sees an average of 23 to 27 ‘honor killings’ of Moslem women annually, and 500,000 cases of ‘female genital mutilation’. Gays don’t dare tread into Detroit. Obviously, Americans allow these cultural acts to continue because of “tolerance and apathy”.

“Immigrants devoted to their own cultures and religions are not influenced by the secular politically correct façade that dominates academia, news-media, entertainment, education, religious and political thinking today,” said James Walsh, former Associate General Counsel of the United States Immigration and Naturalization Service. “They claim the right not to assimilate, and the day is coming when the question will be how can the United States regulate the defiantly unassimilated cultures, religions and mores of foreign lands? Such immigrants say their traditions trump the U.S. legal system. Balkanization of the United States has begun.”

In Los Angeles, legal and illegal Mexicans outnumber Caucasian Americans, so much so, that locals call LA, “Mexico el Norte” or Mexico of the north. More Mexicans birth children in hospitals than any other ethnic group. Since Mexicans abhor blacks, they push them out with violence and intimidation. Note that no less than five Spanish TV stations and over a half dozen radio stations speak and feature only Hispanics and Mexicans. Mexicans, at some point, with enough numbers could secede from the Union with the votes.

Anybody ever hear of Chicago? A killing zone for African-Americans in America? No Caucasians dare live or travel through south side Chicago. It’s the murder capital of America. More people died from fire-fights in Chicago than in the 17 year Afghanistan War. Additionally, Chicago houses hundreds of thousands of illegal alien migrants. They work in underground economies that pay no taxes and the city faces bankruptcy from a vanishing tax base. Chicago’s schools: no longer viable for American students.

One last point to ponder, as if we don’t suffer enough problems with race mixing, multiculturalism and incompatible cultures today, how will it look when we import the projected 100,000,000 (million) more legal immigrants by 2050? 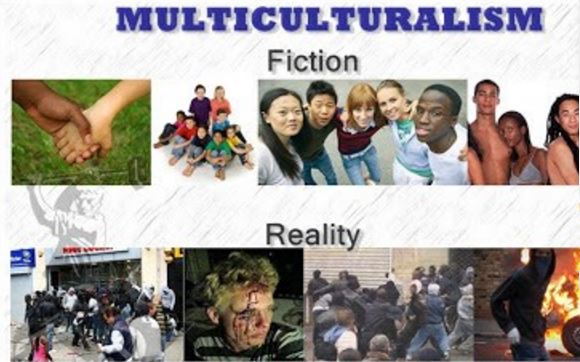 “Diversity within a nation destroys unity and leads to civil wars,” said social scientist Garret Hardin. “Immigration, a benefit during the youth of a nation, can act as a disease in its mature state. Too much internal diversity in large nations has led to violence and disintegration. We are now in the process of destabilizing our America. The magic words of destabilizers are ‘diversity’ and ‘multiculturalism’.”

Dear fellow American, no matter what your race or religion, with your tolerance and apathy, we gallop toward our unfortunate destiny.

In Case You Missed It:  SPECIAL PRIVILEGES: NBA basketball stars won't be required to take covid vaccines, just like members of Congress and their staffers
Posted in Freedoms and tagged Multiculturalism.