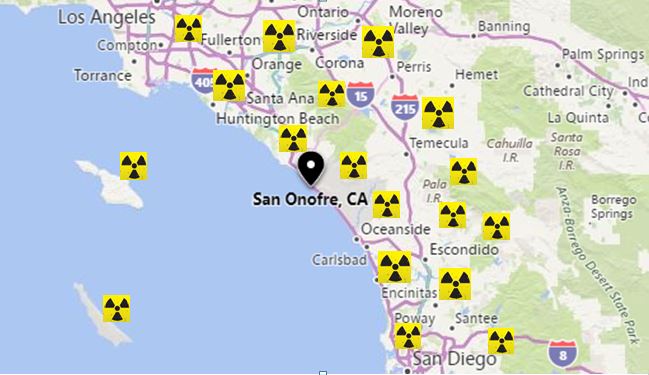 The immediate 20 mile range from the Nuclear plant would have been inhabitable area spanning from Laguna Niguel to Carlsbad and as far Inland as Fallbrook and parts of Temecula.   This area would be part of the exclusion zone, uninhabitable for thousands of years to come.

The effects of people far outside the exclusion zone would be effected to, during Chernobyl incident cancer deaths in Northern Sweden have been directly linked to Chernobyl some 722 miles away.  That is about the distance of San Onofre to Southern Oregon to the North, or well into Mexico past the halfway point of Baja Calfiornia.  Salt Lake City Utah is 728 miles from the plan, leaving it too at about the same distance as Northern Sweden’s distance to Chernobyl.

A worker from the San Onofre nuclear power plant, David Fritch, put his job on the line and became the latest whistleblower from the plant to expose just how close Southern California came to disaster just a few weeks ago.

At a public meeting on 9 August 2018 in Oceanside California, news of the near miss San Onofre nuclear waste accident sparked outrage.

Fritch said: “I may not have a job tomorrow for what I’m about to say, but that’s fine, because I made a promise to my daughter that if no one else talked about what happened on Friday, that I would.”

While working at the plant as a safety professional, Fritch observed first hand the near catastrophe. On 3 August 2018, a 100-ton canister filled with highly radioactive nuclear waste was being “downloaded” into a temporary transport carrier to be moved a few hundred yards from inside the plant to a storage silo buried near the world-famous San Onofre beach.

A thin-walled canister of nuclear waste was being lowered into the transport cask, it snagged on a guide ledge four feet from the top. Crane operators were unaware that the canister had stopped descending and the rigging went completely slack, leaving the full weight of the heavy canister perched on that ledge by about a quarter-inch.

Had the ledge not held for the hour or more it took workers to realize and address the error, the thin-walled canister of highly toxic nuclear waste would have fallen 18 feet to the ground below, radioactive waste would have spewed throughout Southern California affecting millions of people.

A Quarter Inch from Chernobyl

To give you an idea how close California came to disaster, each canister contains roughly the same amount of radiation as the Chernobyl nuclear disaster released in 1986 that left a region of Ukraine uninhabitable, which has led some observers to call this recent incident at San Onofre: “A Quarter Inch from Chernobyl.”

“What we have is a canister that could have fallen 18 feet. That’s a bad day…. And you haven’t heard about it. And that’s not right.”

Mr. Fritch went on explaining how the process of moving the toxic fuel from its current cooling pools to the dry storage silos buried near the beach is seriously flawed because the staff is “undermanned,” “undertrained.”

“And a lot of them, who haven’t been around nuclear before, are performing these tasks — not technicians, not highly trained, and not with thorough briefs.”

Fritch, an experienced safety professional, warned that the culture within the gates of the plant is not focussed on safety above all else, and he advised that the companies responsible should define success primarily in terms of safety, develop transparency, and commit sufficient financial resources to do the job safely.

The dramatic 4-minute video footage of Mr. Fritch’s comments is posted here in the link below:

In the few days since that public meeting took place, as news of the incident spread, local residents have expressed growing dismay at Southern California Edison for mishandling the public trust, as well as gratitude to Fritch for exposing the incident. On Saturday evening, a group of about 40 people gathered for an impromptu protest march on Del Mar Street in San Clemente followed by speakers on a small patch of grass above the San Clemente pier.

The crowd consisted of a mix of experienced activists who have been engaged with the issue of nuclear power for decades and young activists, including two young candidates for San Clemente city council Jackson Hinkle, and Jake Rybczyk, as well as 13-year-old activist Carson Kropfl who seeks to protect the ocean he loves using hashtag #SaveSanO.

From among the experienced activists, Gary Headrick of San Clemente Green welcomed the crowd, and Torgen Johnson, a Harvard-trained urban planner, gave a current situation report of the San Onofre plant as well as insights about the national problem of where to store nuclear waste.

The younger generation of activists then expressed their desires:

“How many times are we going to allow Southern California Edison make mistakes that threaten not only us as humans, but also our environment and our standard of living? We have to stand up to change that.”
— Jake Rybscyk

“Hey everybody. My name’s Carson Kropfl. I’m from San Clemente California and I’m 13 years old. The ocean is my inspiration. We almost had a nuclear disaster on August 3rd, and Southern California Edison did not inform the public. We need real-time monitoring available to the public, just like we get weather and surf reports. We should get radiation reports as well.”
— Carson Kropfl

Dana Pointer has reported on the general status of the San Onofre nuclear plant in 2018 elsewhere.Since the Community Engagement Panel public meeting on 9 August 2018, it appears that the public’s confidence in the plant operator, Southern California Edison, has experienced a setback.

“I’ve served on this panel since it started; so I’ve been here all four years. I’m a little disappointed in tonight’s meeting […] we are a sounding board of the community, and I don’t feel we’re keeping up. I don’t think our answers are keeping up with the questions. […] I feel we need to be a little more responsive to the public.”
— Gary Brown, Orange County Controller

On Friday morning, the Chairman of the Edison Community Engagement Panel, David Victor, a professor at the school of international relations at UC San Diego, spoke with public radio station KPBS in San Diego:

“like any big construction site, people using cranes — misusing cranes — workers make errors. This is one of many workplace safety issues that arise at a normal construction site, and they [Southern California Edison] are working on it. I was concerned about the implications that there was some kind of cusp of an accident. I see no evidence that that’s actually true, but I don’t know exactly where he [whistleblower David Fritch] works on the plant, and we need to get that information from Edison within the bounds of what they can talk about on a personnel matter.”
— David Victor, Chairman, Community Engagement Panel

Regarding comments the previous week on KPBS by Dr. Gregory Jaczko, the former Chairman of the U.S. Nuclear Regulatory Commission, who stated “no more canisters should be buried at the site now used by San Onofre.” Jaczko said, “the chances are, if they’re buried they will be forgotten about.”

To make matters worse Muslims have been eyeing the area for a terrorist attack, and the Nuclear Plant is on the top of this list. The porous California-Mexico border is nearby, and terrorists have been entering the United States in droves at the border just miles away.

Omar al-Bayoumi lived nearby in San Diego in 1996 and made plans for the 9/11 hijackers’ deadly mission.

Al-Bayoumi had lived with his wife and children in several Clairemont apartments, including one where two of the suspected terrorists lived.

Al-Bayoumi helped the San Diego-based terrorists financially by paying rent at the Parkwood Apartments for Nawaf al-Hazmi (or Alhazmi) and Khalid al-Midhar (or Almidhar).

In early 2000, al-Bayoumi hosted a party at the Parkwood complex to introduce newcomers al-Hazmi and al-Midhar to his friends.

Al-Midhar and al-Hazmi were identified as hijackers aboard the jet airliner that crashed into the Pentagon.

in 2017 a man drove a stolen van into a restricted parking lot at the idled San Onofre Nuclear Station and claimed to have explosives in his vehicle,  packages were found by the sheriff’s bomb-squad, authorities said.

America’s nuclear power plants and research labs remain vulnerable to terrorist attacks from the sea, sky and control room, despite tighter security imposed since 9/11, says a scholarly study prepared for the Pentagon and released Thursday …

“The spent fuel pools are a very significant vulnerability, as we also saw in Fukushima in Japan, The concern is that terrorists could do intentionally to a spent fuel pool what happened to Fukushima’s pools by an accident of nature: You drain the water out. The fuel heats up, and melts, and you get a criticality event and the release of very significant amounts of radiation” …

We Hear You: Brett Kavanaugh and Christine Blasey Ford State Their Cases to America

Editor’s note: Our audience had much to say in the days leading up to the extraordinary hearing Thursday where the...