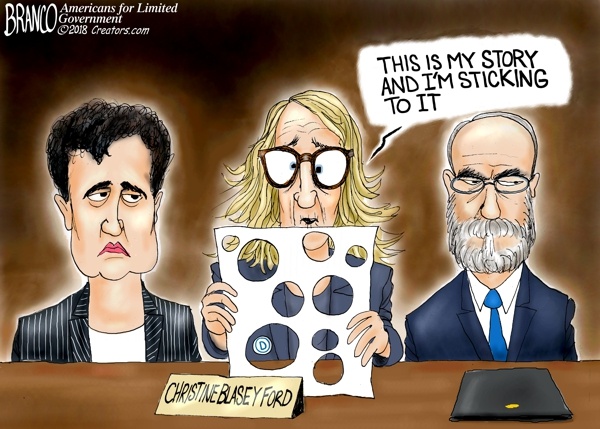 When Neil Gorsuch was confirmed for the Supreme Court, the Republicans had one more Senator than they do now. Ironically, they lost that Senate seat in Alabama when the Republican Party failed to stand up for Judge Roy Moore soon enough and defend him from two fabricated sexual assault charges. There was also a failure to keep the Democrats from busing in people from neighboring states, who were voting illegally in the Alabama special election for the Senate.

After Roy Moore had his election stolen from him thanks to false accusations and illegal voters, Dianne Feinstein and Chuck Schumer started plotting their next move if another opening appeared on the Supreme Court.

If a sexual assault smear campaign could work against Roy Moore, why not concoct one against Trump’s next Supreme Court nominee?

The plot becomes much more feasible if perhaps Dianne Feinstein acquired some blackmail information against Republican Senator Lisa Murkowski. Then, if the Democrats don’t lose any votes, they’ll be able to defeat Trump’s nominee in the Senate.

Shortly after Trump announced that Brett Kavanaugh was his choice for the Supreme Court, Christine-Blasey Ford sent a letter to Dianne Feinstein claiming that she had been sexually assaulted by him 36 years ago, give or take a year.

The vagueness of Blasey-Ford’s accusations and her failure to ever name an actual street address or the month and day of the alleged attack, further undermined her credibility. All four people, that Ford claimed were at the party denied that the party ever took place. Ford’s friend, Leland Keyser stated that she had never met Kavanaugh and had never been at a party with him.

Then Ford’s boyfriend from the 1990s turned up. He signed a sworn statement that contradicted Ford’s claim that she was claustrophobic or fearful of flying. He noted that Ford had never mentioned Kavanaugh to him. He contradicted her claim under oath that she had never “coached” anyone in regards to a lie detector test.

Feinstein and Schumer must have known that Blasey-Ford’s accusations were extremely weak and lacking any corroborating evidence which is why they failed to have the FBI examine her story in July, giving them three months to spot all the inconsistencies and holes in Blasey-Ford’s story.

No, the Democrats deliberately withheld Ford’s accusations until the last minute so that the FBI could not discreetly determine her credibility and spare Kavanaugh the embarrassment of being falsely accused in public. Instead, the Dems together with the liberal media did a witch hunt against Kavanaugh, hurling accusations against him without even a time and place so that he couldn’t even offer up an alibi.

Ford did put on a good act with her trembling voice (although she never shed a real tear) in front of the Senate. Swarms of feminists started screaming at people that Ford must be believed since feelings are clearly more important than facts when a decent man’s reputation is on the line. Ford sounded like a frail little five year old for much of her testimony (although the laughing with her lawyers between her testifying suggested that she was putting on an act for the more observant).

The Democrats were probably hoping that the Republicans would chicken out and drop Kavanaugh rather than ride out a rough stretch of road. The Democrats did get Lisa Murkowski to vote against Kavanaugh, but one Democrat Senator switched sides and Kavanaugh was approved.

Millions of Americans were no doubt shocked at the angry feminists and supporting Democrats, who apparently care little about due process, evidence and giving the accused a chance to defend himself.

Perhaps, the Democrats forgot that the Kavanaugh nomination was just one month before the midterm elections, and that an extra-slimy, underhanded and horrific slander job against Kavanaugh would be remembered by ordinary Americans, who don’t want a political party that evil and crooked gaining any seats.

(Paris France) Marine Le Pen's teenage daughter is hospitalised after being molested and beaten up by migrants outside a bowling...