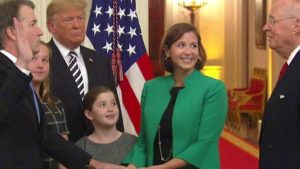 The Confirmation of Judge Brett Kavanaugh is the preamble before a Republican Red Wave Tsunami hits home in the Mid Term elections on November 6th. President Donald Trump’s call to arms will be heeded and acted on in full measure by the “MAGA MOVEMENT” who have been castigated and insulted by the Democrat slurs of being “Hillbillies, Deplorables and the Dregs of Society“. Trump’s Army and Train will arrive on time and deliver an increased majority for the Republicans in both Congress and the Senate, thereby squashing any vain and inglorious attempts by the Left’s leaders Chuck Schumer and Nancy Pelosi to impeach both President Trump and Supreme Court Justice Kavanaugh in equal measure.

The American people have been rightly horrified and disgusted by the Democrat’s vilification of Judge Kavanaugh, a tipping point in any right thinking person’s mind, and will undoubtedly send hordes and swarms of the Silent Majority, Independents, and Blue Collar Democrats rushing to vote with their consciences for the Republican ticket when the polls open.

To coin a phrase of the Master Builder Donald Trump himself “MAGA SUPPORTERS NEVER GET TIRED OF WINNING“.

The Barkan Industrial Zone massacre, is just days old, and already the moral watchdogs of the Peace Process are wringing...